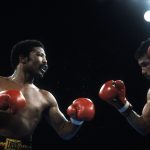 They are both gone now, perhaps too soon given their chronological ages at the time of their earthly departures. But two of the greatest fighters ever to grace the prize ring learned, as other celebrated practitioners of their brutal art had and still do, that the fame, glory, wealth and contentment of yesteryear doesn’t always extend into post-boxing lives.

General George Patton once observed that “all glory is fleeting,” but that is not always the case. Death is inevitable for everyone, but for a select few truly special fighters, cherished memories of what was endure beyond the grave. It has been that way for Aaron “The Hawk” Pryor, who was 60 when he passed away on October 9, 2016 (11 days before his 61st birthday), and also for Alexis Arguello, just 57 when he took the eternal 10-count on July 1, 2009, apparently by his own hand.

The decline of a special fighter’s gifts might owe to the natural laws of diminishing returns, a stark reality given the accumulated wear-and-tear on their bodies. Sometimes, though, it can be attributed to the same temptations that can ruin the lives of anyone else: drugs, booze, gambling, depression, the wrong sexual partners or some combination thereof. And so it was for Pryor and Arguello, who by all rights should have been able to enjoy the fruits of their labors once the last punch had been thrown by each. It is another cautionary tale of the pitfalls than can come with retirement from boxing, and sometimes even before, that the demons that tortured their minds and ravaged their physical beings were visited upon these future first-ballot inductees into the International Boxing Hall of Fame (Arguello in 1992, Pryor in ’96).

There would be numerous other occasions when Pryor, the perpetual-motion punching machine from Cincinnati, and Arguello, the graceful, classy and efficient artisian from Nicaragua, would showcase their pugilistic skills for appreciative audiences. But it was the first of their two head-to-head clashes, on November 12, 1982, that has become the stuff of legend. The conclusion of one of the greatest fights of all time – Pryor winning by emphatic 14th-round technical knockout (recorded as such only because referee Stanley Christodoulou didn’t bother to initiate a count), before of 23,000-plus frenzied spectators in Miami’s Orange Bowl Stadium – might have been controversial, but the nonstop action that preceded it from the opening bell was spectacularly entertaining. It was more or less a foregone conclusion at the end of the decade that The Ring would anoint that battle royale as the top fight of the 1980s. “It was like a miniature `Thrilla in Manila,’” lead promoter Bob Arum remarked. “It went one way, then the other way.”

And, just as certain pairings of boxing superstars will always bear the stamp of historical significance, so too does the epic first confrontation of Pryor and Arguello. Another anniversary of that magical night, the 38th, is here, perhaps not coincidentally the day after Veterans Day, when warriors of another kind are commemorated throughout America.

About that controversy, which still sparks at least some debate all these years later. Arguello, a world champion at featherweight, junior lightweight and lightweight, was attempting to become the first fighter to win titles in four separate classifications when he moved up to 140 pounds to challenge WBA ruler Pryor. The odds favored Arguello, who went off as a 12-5 favorite, in that quest, and in the 13th round it did appear as if he was on the verge of doing so. Up by two points on one judge’s scorecard but down by three on those of the other two judges, Arguello appeared to hurt Pryor with a flurry of punches, possibly setting the stage for the Nicaraguan – an accomplished finisher, as evidenced in 1999 at No. 20 on The Ring’s list of the greatest punchers of all time – to close the show in the 14th.

Pryor’s corner team was headed by trainer Panama Lewis, who was justifiably disgraced as the result of the June 16, 1983, bout in Madison Square Garden when his fighter, Luis Resto, brutally battered the favored Billy Collins Jr. en route to a 10-round unanimous decision. When Collins’ father-trainer went to congratulate the winner, he was astounded that Resto’s gloves seemingly were minus a significant part of their padding. The New York State Athletic Commission, which impounded the gloves, determined that they had indeed been tampered with. Resto and Lewis were permanently banned from the sport, and both received prison terms. The penalties incurred by the perpetrators brought little solace to Collins Jr., who died on March 6, 1984, when he crashed his car into a culvert, possibly intentionally, as he was inconsolable from the abrupt end to his promising boxing career.

Attending to Pryor during the one-minute break between the 13th and 14th rounds, Lewis called for a second water bottle, “the one I mixed,” leading to speculation it contained an unsanctioned substance. Any suspicions that Lewis had skirted the rules were unverifiable, however, as the Florida commission failed to administer a post-fight urinalysis. For his part, Lewis at various times claimed the bottle contained peppermint schnapps or Perrier to help Pryor deal with an upset stomach.

Whatever the truth may be, a seemingly invigorated Pryor was the fighter who supplied the exclamation-point closing sequence, putting Arguello away with a volley of punches so devastating that he remained on his back, out cold, for nearly five minutes.

There would be a rematch, of course, and it took place on September 9, 1983, at Las Vegas’ Caesars Palace, with Pryor winning by 10th-round knockout. It was a good fight in its own right, but perhaps given short shrift when compared to the participants’ classic and unforgettable first meeting.

It is indicative of the healing aspects of boxing, frequently borne of mutual respect, that Pryor and Arguello eventually became friends, often appearing together at the IBHOF’s annual induction weekends. Perhaps surprisingly, the matter of the mysterious second water bottle ceased to be a point of contention between them. After his knockout loss in the rematch, Arguello asked Pryor if their first fight had been on the up-and-up. “I told him it was, and he’s never asked about it again,” Pryor told me years later in Canastota, New York, site of the IBHOF.

Arguello, seated alongside Pryor, said he had come to accept that he and Pryor share the sort of bond that forever links two fighters destined to march through history together.

“There are 24 rounds between us that I can never forget,” he said. “From the first round of the first fight, when the bell rang, we gave 100 percent of ourselves.”

And the mysterious second bottle controversy?

“I did my best,” Arguello said with a shrug. “The other guy did better. That’s simple enough to understand.”

There are other eerily similar circumstances, less happy ones, that put the full stories of Pryor and Arguello on parallel tracks. Both were the products of impoverished childhoods, hardly unique in a sport where hunger and desperation fuel the cauldron that forges greatness inside the ropes, and the benefits attendant to many of the sport’s top performers can evaporate like morning dew.

Pryor reportedly turned down big-money matchups with Sugar Ray Leonard and Roberto Duran because he thought those paydays should have been even bigger. He learned the hard way that some opportunities to improve one’s professional legacy in addition to moving into a higher tax bracket, once gone, never come back around.

“After Buddy (LaRosa, his estranged manager) took his half, the government took its half (of what was left),” Pryor said in 1995. “Then after that, my wife at the time had to have her half. After they got their half, I didn’t have half of nothing.”

Pryor did all right financially, all things considered, but his fall from grace was spectacular in its totality. He was sentenced to prison on a drug conviction in 1991, and the following year he was a homeless crack addict living on the streets of his hometown of Cincinnati, shadowboxing in alleyways for handouts that might allow him to score his next drug hit. At one point his weight had dwindled to 100 or so pounds, although he was too ashamed to step on a scale, and more than once he considered suicide as a means of ending his misery.

In time, Pryor decided enough remained of what had made him dangerous to attempt a comeback. He was stopped in seven rounds by a journeyman welterweight, Bobby Joe Young, on August 8, 1987, in Fort Lauderdale, Florida, his only defeat in a career in which he would finish 39-1 (35 KOs).

But the flight of “The Hawk” avoided another crash landing. He found love with his third wife, the former Frankie Wagner, herself a recovering cocaine addict. Pryor was cleansed, as much as anyone can hope to be, of his drug cravings, when he was inducted into the IBHOF, where he was a frequent returnee, soaking in the adulation he had earned with his fighting heart and relentlessly attacking style.

“To me, it’s one of the greatest feelings you could ever have to come to his special place,” he told me in 2013 of his near-annual pilgrimages to the central New York hamlet. “I look forward to it like a little kid looks forward to Christmas. The fans just take you in. They embrace you. If the Hall of Fame was in, say, New York City, I don’t think it would feel the same. Too many different things to do or see there. Here, it’s all about boxing for four days.” Few could have expected Arguello, boxing’s quintessential gentleman who always carried himself with a regal yet humble air, to sink into a deep and despondent hole from which it proved even more difficult to climb out of. A partisan for Nicaragua’s Contras in the 1980s who switched and became a member of the Sandinista party, perhaps for expediency’s sake (the Sandinistas once seized his home and financial assets), Arguello was elected mayor of Managua – Nicaragua’s capital – on November 9, 2008, but with only 51.3 percent of the ballots, a far less resounding approval rating than he had always received in his home country as an active boxer. He also lost himself to Pryor-level vices, binge drinking, addiction to crack and powder cocaine, and indiscriminate fornication with women outside the bonds of matrimony with his three wives.

“I’m just trying to be a man,” Arguello, during one of his periodic attempts to fix when was broken inside himself, told writer Tim Graham in a tell-all confession that appeared on the ESPN website. “I need to be sober. I need to be straight. You only need a little conviction. There were times before when people would come up to me two, three times and asked me if I wanted a drink and I would say, `No,’ but then the fourth time I would say, `Sure.’ It was weak conviction.”

It is undoubtedly best for the boxing world to remember the best of Pryor and Arguello, makers of magic inside the ropes instead of flawed human beings outside of them. And never was the magic they made more memorable or mesmerizing than the night of November 12, 1982, when they reminded everyone of just how remarkable boxing can be when two proud and determined fighters meet at the height of their powers.

The post Aaron Pryor-Alexis Arguello 1 was the top fight of the 1980s, and one of the best ever appeared first on The Ring.