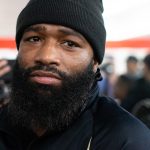 In recent weeks, Adrien Broner was arrested for trespassing at the MGM Grand Garden Arena in Las Vegas during the weigh-in for the much-anticipated rematch between Deontay Wilder and Tyson Fury. Fast forward to Friday night, and Broner is back in a familiar location — behind bars.

According to TMZ, the four-division titleholder was pulled over by Miami police for driving under the influence at around 8:45 p.m. local time. Bond was set at $1,000, and Broner is expected to remain jailed until at least early tomorrow morning.

This is just the recent addition in a slew of recent ‘L’s for Broner.

According to sources, Broner was banned from the MGM in November because he, along with another individual, were drunk and attempted to breach security to get into Ryan Garcia and Canelo Alvarez’s dressing room the evening Alvarez knocked out Sergey Kovalev to lift the WBO light heavyweight title. Broner (33-4-1, 24 knockouts), 30, of Cincinnati, Ohio, hasn’t fought since January 2019, when he lost a unanimous decision to Manny Pacquiao at that same venue. He has failed to win a fight since getting a split-decision nod over Adrian Granados in February 2017, but a majority of ringside observers thought Granados deserved the victory. In his last three fights, Broner has two defeats and a draw.

The troubled boxer was also sued last year by a New York jeweler for refusing to pay for loaned rings and fancy watches. Broner also pleaded guilty last December to assault and unlawful restraint after forcibly kissing a woman at a Cleveland nightclub.

The post Adrien Broner arrested for DUI in Miami, Florida appeared first on The Ring.