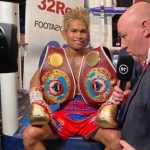 After more than a decade of striving in anonymity, John Riel Casimero’s moment had finally come. He would finally get the major fight he long craved, a unification bout with pound-for-pound candidate Naoya Inoue. It was the fight he’d called for immediately after winning the WBO bantamweight title last November, looking into the television camera and saying “Come on, Monster!” immediately after he knocked out Zolani Tete in the United Kingdom.

And then the pandemic hit in March. Casimero was already in Las Vegas, working on his conditioning with Angel “Memo” Heredia, and maintaining his boxing sharpness with trainer Nonoy Neri, but Inoue couldn’t immediately travel from Japan because of lockdowns.

Sean Gibbons, now President of MP Promotions, has been with Casimero (29-4, 20 knockouts) through many of his ups-and-downs. He had even had his rib broken after getting sucker punched during the 2012 riot that followed Casimero’s first title win against Luis Lazarte in Argentina. Still, this period stood out for its difficulty.

“It was a rollercoaster of emotions,” said Gibbons. “The first 60 days, we were very optimistic that everything was still gonna work out, hopefully get the fight with Inoue. Then around June we started to realize that things didn’t look good.

“Casimero got very depressed, he missed his kids, his daughter had her birthday coming up.”

That’s when Casimero started thinking about returning to the Philippines, without making a defense of his title. He was struggling to find the motivation to train for a date that didn’t exist. Neri, with his obligations back home, had to return, and Casimero had tough choices to make.

But Gibbons knew that’d be a mistake, and set out to find another opponent. That meant also finding a replacement trainer, with former WBA bantamweight titleholder Clarence “Bones” Adams stepping in as trainer. Adams had worked previously with Casimero, and has known Gibbons for 30 years, easing the transition. What makes Adams even more fitted for the job is that he understands Casimero’s sense of purpose, given that he himself is married to a Filipino woman, and has three Filipino sons.

Casimero has fought in ten different countries, but somehow is only now making his U.S. television debut. That lack of exposure has meant that his achievements, which include winning world titles at 108, 112 and 118 pounds, have gone overlooked as his countrymen like Manny Pacquiao, Nonito Donaire Jr. and even Donnie Nietes and Jerwin Ancajas got more attention internationally.

Adams knows that Casimero has been under-appreciated by the casual fans, but says that will change once they get a look at him.

“He’s tremendously underrated, this man has been to 10 different countries, and fought and won. People here don’t want to go to Canada or Mexico, they’re scared,” said Adams. “This is his coming out party, after this fight everyone should know who he is.”

Getting past this next fight could mean rescheduling the fight with Inoue, if he gets past his October 31 defense against Jason Moloney with his WBA and IBF titles in tow. Other possibilities Casimero is looking at are a bantamweight clash with Guillermo Rigondeaux, or stepping up to 122 pounds to face Luis Nery, who will be facing Aaron Alameda for the WBC junior featherweight title on the same card.

“There are many big fighters for the next fight so I’m anticipating Naoya Inoue, Guillermo Rigondeaux, Luis Nery,” said Casimero of Ormoc City, Philippines. “So next time I fight it will be all big fights.” Standing in Casimero’s way is Micah, a 2012 Olympian who is now trained by Andre Rozier out of Brooklyn, N.Y. Micah has struggled against limited competition in the past, including getting dropped in his last bout against Janiel Rivera before winning a decision. Casimero says he hasn’t seen much of the 29-year-old because he has very few fights on YouTube, but Gibbons and Adams have done plenty of scouting for themselves.

“Stylistically he’s a guy like Joshua Clottey, like a lot of Ghanaians with the hands up high, they come right to you, they want to mix it up,” said Gibbons. “At the end of the day, should Casimero be better? I absolutely think so, should Casimero win? Yes, but again you can’t just go in and think it’s gonna be a walk in the park. Because guys elevate when they’re challenging, because this is Duke Micah’s everything and he knows it.”

Though they’ve had limited time together, Adams has focused on making Casimero a more efficient fighter, getting him to start earlier by working the body to break down his opponent, instead of head hunting and waiting for the perfect opportunity to present itself later in a fight.

In a twist of irony, Casimero had been sparring with Joshua Greer, Casimero’s former no. 1 contender, who had lost that designation after he was upset by Casimero’s compatriot Mike Plania in June.

Gibbons says that, despite taking some time off from the gym when the Inoue fight was cancelled, Casimero is in far better shape than he was for his last fight, when he knocked out Tete in three rounds. Casimero had arrived for camp in early October of 2019 weighing 144 pounds, cutting down in weight before focusing on strategy. This time, there was no such need for significant weight cuts.

There’s no time to be disappointed about a change in opponent, said Gibbons. An impressive title defense that catches the attention of promoters and TV executives can only be good for securing future opportunities.

“[Casimero] knows what’s at stake, he knows it’s only gonna be another 6-7 months before he gets a Rigondeaux, maybe a Luis Nery, he knows it’s just a little bump in the road but he understands that he cannot have a letdown. If you have a letdown, your letdown may be that you don’t get any other fights,” said Gibbons.

“There’s a letdown for a certain minute but that’s in the rearview mirror. And he’s up here to do business with Duke Micah, that’s the only thing he’s thinking about now, Duke Micah.”

The post After many delays, John Riel Casimero’s time is finally near appeared first on The Ring.