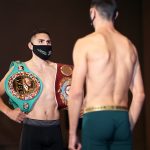 It has been 13 months since Jose Ramirez last fought, but it seems like it has been an eternity.

While the COVID-19 pandemic has altered life, even the sport of boxing, Ramirez has stayed in the gym and provided relief for an overlooked group of essential workers he is very familiar with.

Ramirez will finally enter the ring Saturday, as he defends his WBC/ WBO unified junior welterweight titles against Viktor Postol at the MGM Grand Conference Center in Las Vegas, Nevada. The 12-round bout will be preceded by the 10-round clash between unbeaten junior welterweight Arnold Barboza (23-0, 10 knockouts) and Tony Luis (29-3, 10 KOs).

It has been a roller-coaster ride for Ramirez (25-0, 17 KOs) since winning the WBO title on July 27 of last year, stopping Maurice Hooker in round 6 of a unification fight in Arlington, Texas, not far from Hooker’s hometown of Dallas. Ramirez was scheduled to make the first defense of the unified titles on February 2 in Hainan, China, but the card was postponed due to the COVID-19 pandemic spreading throughout East Asia.

Top Rank announced a new date of May 9 for the Ramirez-Postol fight to take place at the Save Mart Center in Fresno, California, not far from Ramirez’s hometown of Avenal. The fight was again postponed due to the Coronavirus spread throughout California.

Rick Mirigian, who advises Ramirez, had hoped the fight would take place at an outdoor venue in the San Joaquin (Central) Valley, where Fresno is located, during the second half of the month of June. The planning of the fight was in its initial stages but had to be scrapped as Postol was still in the Ukraine and there was uncertainty when he would be able to travel to the United States.

Despite the setbacks, Ramirez remained focused, training for the fight in Riverside, California, where the Robert Garcia Boxing Academy is located.

“For the first date for this fight, I did a full training camp,” said Ramirez, who is ranked No. 1 at 140 pounds by The Ring. “The fight got rescheduled the same day I was supposed to depart, but luckily, I didn’t get to the airport. For the second date, I was in camp for five weeks before I got the call that the fight was going to get cancelled again. Now, this is another nine-week camp that I’ve been on. My last fight was 13 months ago. I’ve been in the gym the whole year and with this fight on my mind the whole time.” In Postol, the 28-year-old Ramirez will face a fighter who once held the WBC junior welterweight title, and who had defeated Lucas Matthysse by knockout in October 2015. He would lose the title in his next bout over nine months later to then-WBO titleholder Terence Crawford.

Postol (31-2, 12 KOs) has won three of his last four bouts, but has not fought since defeating Mohamed Mimoune by unanimous decision on April 27 of last year.

Ramirez says he is not overlooking Postol.

“I know Viktor Postol is a very experienced fighter,” said Ramirez, who has been promoted by Top Rank since turning pro after representing the United States at the 2012 Olympic Games in London. “I have been training very, very hard for this fight.”

During the early stages of the pandemic, Ramirez teamed up with Central Valley community leaders to raise money to assist the region’s agricultural workers. Ramirez, whose father worked in the fields around Avenal after migrating from Mexico, led the way by donating essential supplies and more than 1,000 wellness boxes, which included N95 masks, paper towels, toilet paper, rice, masa, beans, and hand sanitizer.

Ramirez, who has been rumored to move up in weight and face WBO titleholder Terence Crawford, has recently stated he would only stay at 140 pounds if a fight against Ring Magazine champion and IBF/ WBA unified titleholder Josh Taylor can be made.

At Friday’s weigh-in, Ramirez weighed in at 139.8 pounds. Postol weighed 139.7 pounds. An impressive victory could make that a reality for later this year or in early 2021.

“After a big win against Hooker, I am ready to go and continue my journey to become undisputed champion.”

“Due to the pandemic, the fight got rescheduled, but I stayed at the gym. I remained composed and patient. I have a great team and my family behind me. I’m a man of faith. I believe everything happens for a reason, and now that I’m here, I can’t wait to showcase my talent on (Saturday). I want to show the world how much I have grown and mature as a unified champion. My goal is to become undisputed world champion.”

The post After multiple delays, Jose Ramirez is ready to get on with his career appeared first on The Ring.