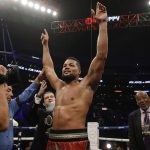 JOE JOYCE DOES not go along with the thinking that says his blockbuster battle with Daniel Dubois on November 28 is a make or break fight for him.

Now 25, Joyce accepts that having launched his professional career just three years ago, every fight has represented a crossroads for him, where time would not be on his side in the event of having to rebuild.

However, the 2016 Olympic silver medallist insists he remains a sprightly 30-something with plenty of miles to go on his clock.

“I don’t feel that old because I only started in the game at the age he is now, which is 23,” countered the Putney-based heavy. “I feel like I haven’t been in the sport that long and that I have quite a few years ahead of me.

“But, yeah, this is a big fight and it is a big ladder to the top or a snake where I would have to rebuild. So the loser will have to rebuild a little bit and Daniel has got time more on his side because he is a young pup who would definitely be able to come back.

“I’d be able to come back too, but I don’t plan to do that. This is my chance to show what I am made of and to progress to the next stage and get a shot to become heavyweight champion.

“That is the route I am going. My aim before was to get to the Olympics and win a medal, so I completed that, although it was meant to be the gold medal and that didn’t happen. As a professional I want to be world champion and this is the route I need to go down and Dubois is standing in my way right now.”

According to Joyce, the pressure going into the fight rests on the shoulders of the younger man.

“I am not under any pressure because, according to the bookies, Daniel has already won. He has made a big name for himself and he has got the pressure to deliver.

“I don’t know why, but it is okay because it will be better when I beat him because I will take his scalp, how he has been built and take it further.”

On the undercard, highly-touted Ilford youngster Hamzah Sheeraz (11-0-0, 7KO’s) will defend his WBO European Super-Welterweight title against canny Spaniard Guido Nicolas Pitto (26-7-2, 8KO’s). Jack Catterall (25-0-0, 13KO’s) will take on the French-based Tunisian Abderrazak Houya (14-2-0, 2KO’s) in a 10 round Super-Lightweight contest ahead of his challenge for the WBO world title.

Joshua Frankham (1-0-0) will return to Super-Welterweight action, Louie Lynn (7-0-0, 6KO’s) will look to follow up his 2nd round TKO from the 25th July and Henry Wharton backed Heavyweight Mitchell Barton will make his long awaited pro-debut.

The post Age is just a number for ‘Juggernaut’ Joe Joyce appeared first on The Ring.