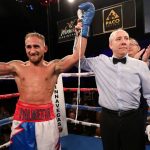 Alberto Palmetta hopes to continue to build off the momentum of a solid victory from his last fight.

The junior welterweight prospect will square off against journeyman Saul Corral Saturday night at the Sports Event Center in Rock Hill, South Carolina. The 10-round bout will air live on TyC Sports throughout Argentina.

Palmetta (14-1, 10 knockouts), who resides in Buenos Aires, Argentina, stopped Tre’Sean Wiggins in round 6 of his last bout on August 15. The win over Wiggins took place exactly nine months after stopping Mexico’s Erik Vega Ortiz, which aired on a ‘ShoBox’ telecast.

The 30-year-old has won his last eight bouts, all by knockout, since suffering the only blemish of his career at the hands of Gonzalo Gaston Coria in November 2017.

Sampson Lewkowicz is confident Palmetta, whom he represents, can become a contender in a very talent-rich division that is 140 pounds.

“He can certainly go far as a junior welterweight,” Lewkowicz told The Ring Wednesday.

Corral (23-15, 13 KOs), who is originally from Agua Prieta, Mexico and now resides in Douglas, Arizona, has not fought since November 23, losing a one-sided decision to Baishanbo Nasiyiwula. The 33-year-old has lost five of his last seven bouts.

Fernandez (12-2-1 1 NC, 9 KOs), who resides in Santa Fe, Argentina, fought to a no-contest against Juan Carlos Camacho of Puerto Rico in his last bout on October 5 of last year. The 29-year-old dealt Joshua Franco his only loss as a pro in March 2018, albeit controversially as the fight many thought was stopped prematurely.

Diaz (5-1-1, 1 KO), who resides in Bloomington, California, fought to a split-decision draw against Christian Negrete in his last bout on June 29 of last year.

Hard-hitting junior welterweight Shinard Bunch (9-1, 8 KOs) of Trenton, New Jersey will square off against Christian Guido (8-13, 6 KOs) in a six-round bout. The 42-year-old Guido, who is originally from Italy and now resides in Buenos Aires, has lost five of his last six bouts.