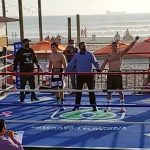 Gonzalez, who resides in Mexico City, was the aggressor from the opening bell, throwing an abundant of punches that put Montoya on the defensive. Montoya was effective in round, countering Gonzalez with left hooks or overhand right hands to the head.

Round 4 was Montoya’s best of the fight. Montoya twice connected on counter right hands to the head that sent Gonzalez back against the ropes, forcing him to clinch or cover up.

Both fighters had their moments during the final two rounds of the fight. Gonzalez seemed to find a second wind, allowing him to throw several combinations, but Montoya landed the more effective punches during exchanges until the final bell sounded.

The 20-year-old Gonzalez, who has a victory over former world junior bantamweight titleholder Rodrigo Guerrero, has now won his last four bouts since losing by knockout to Sebastian Tinoco on July 20 of last year.

Montoya made his United States debut on October 27, defeating once-beaten Humberto Rubalcava by unanimous decision in Hollywood, California. In his last bout on February 15 in Tijuana, Mexico, Montoya knocked out journeyman Juan Gomez Torres in round 2.

Featherweight prospect John Dato remained unbeaten, dropping Angel Guevara once and stopping him in round 3.

Dato (15-0-1, 10 KOs), who is originally from the Philippines and now resides in the California Central Coast city of Santa Maria, battered Guevara during the first two rounds of the fight.

In round 3, a barrage of punches from Dato dropped Guevara in a corner. Guevara beat the count and bravely fought back, but continued to take several combinations to the head and body. During an exchange against the ropes, the referee saw stepped in, saving Guevara from taking further punishment.

Guevara, who resides in Guasave, Mexico, drops to 16-15-4, 9 KOs and has now lost seven of his last eight bouts.

Junior middleweight Daniel Valdivia, who appeared on the recent season of ‘The Contender,’ knockout out Omar Hernandez (5-8, 2 KOs) of nearby Tijuana at 1:08 of the opening round. Valdivia connected with a right hand to the head, dropping Hernandez face-first to the canvas. Hernandez beat the count, but was in no shape to continue, forcing the referee to stop the fight.

Valdivia (17-4, 13 KOs), who resides in Tulare, California, has now won his last three bouts after losing his previous four.