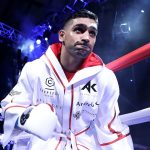 Khan, fresh off a sixth-round stoppage loss to WBO welterweight titleholder Terence Crawford last month, returns to action quickly, although the opponent is a novice by comparison.

Very popular, and marginally accomplished as an amateur in his native India, Goyat (11-3-2, 2 knockouts) has defeated no one of consequence since turning professional in 2011.

The 27-year-old has a brace of defeats to fighters who were making their professional debut, and the only statistic on his resume that jumps out is a four-round split decision loss to Xu Can in 2014.

Despite being a horrendous mismatch on paper, the fight is likely to do big business in Jeddah. Khan, a devout Muslim and philanthropist, is immensely popular in the middle east and fans will flock to see him live.

This will also be the first time that a British Pakistani has fought an Indian boxer. The 12-round bout will be contested at welterweight.

The post Amir Khan to face unheralded Neeraj Goyat on July 12 in Jeddah appeared first on The Ring.