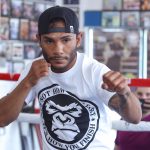 Before Andy Ruiz turned the heavyweight division on its ear by spoiling the U.S. debut of Anthony Joshua, Andrew Cancio’s fourth-round stoppage of Alberto Machado in February was the biggest upset of 2019 as well as the “feel-good” story of the year, so far.

Cancio, a hardnosed gatekeeper who had retired from the sport in 2017 and worked a fulltime job with the Southern California Gas Company, was all but counted out by the boxing community going into his challenge to then-unbeaten Machado, a near 6-foot southpaw boxer-puncher trained by Freddie Roach.

Like Ruiz, Cancio was dropped early in the fight but got up and fought back so fiercely that he soon overwhelmed the odds and media favorite. Unlike Ruiz, and perhaps every other world-class professional boxer, Cancio continued working his fulltime job after the biggest victory of his 13-year pro career. He resumed work the week after the upset, which earned him the WBA’s secondary 130-pound world title, and he worked fulltime right up until fight week of his anticipated rematch with Machado, which takes place tomorrow at the same venue (Fantasy Springs Casino) and on the same platform (DAZN) as the first bout.

“The days go by real quick,” said Cancio, who uses vacation days to have fight week off.

“I focus on camp, but I still have to work,” Cancio told a small group of writers during a media workout on Tuesday. “I’m still not getting those big, big paydays.”

True, the 30-year-old native of Blythe, California, isn’t earning six- and seven-figure purses, but even back in the days when such exorbitant paydays didn’t exist, the top prize fighters were fulltime pugilists.

“In 57 years in boxing I’ve never known a world champion to have a fulltime job,” said hall-of-fame publicist Bill Caplan.

Most fighters would at least take a leave of absence – especially from a job of hard physical labor – going into the most important bout of their career. But Cancio doesn’t believe tomorrow’s rematch is all that. Cancio puts it on Machado. Photo by Lina Baker / @SeeYouRingside

“I would say my last fight was the most important fight of my career,” he said. “That was going to define whether or not we were going to stay at the elite level. This fight right here is to showcase that it wasn’t a fluke and I’m going to go in there and do what I did last time but maybe even worse (for Machado).”

Machado (21-1, 17 KOs), who claims to have struggled with his weight going into their first fight, says he’s 100-percent prepared for the rematch. Cancio doesn’t see that as a problem.

“For the first time in my pro career, I’ve been active,” said Cancio, who returned to the sport last April with a 10th-round TKO of Aidar Sharibayev, followed by a tough 10-round decision over Dardan Zenunaj four months later, followed by his shot at Machado. “We’ve been in back-to-back-to-back camps now.

“My body is reacting a lot quicker, I feel stronger, I’m healthier. If the weight was Machado’s problem, what difference is it going to make? He’s a tall 130-pound guy who is going to struggle regardless.

Cancio’s last setback, a ninth-round stoppage to Joseph Diaz Jr. on the PPV undercard of the Canelo Alvarez-Liam Smith fight in September 2016, was at featherweight (126 pounds). The disappointing loss convinced him to hang up his gloves – but not for long. He missed boxing.

“The training for a fight, the dedication, the eight-week camp where you’re preparing your mind, your body, everything, the lime light come fight week when it’s exciting and all the hard work is done and all that’s left is make the weight real quick and then step in the ring,” Cancio said with a smile and a twinkle in his eyes, “it’s the best time in the world. Walking into that ring is the best, especially after a victory.”

Cancio’s children – he has a 7-year-old son and 10-year-old daughter – also encouraged him to give boxing one more try.

“I had stopped training, I had stopped watching boxing altogether, I was just trying to get my s__t together, but my kids told me to get back in there.”

So, he did. And in doing so, he reminded the boxing world of his underrated boxing ability, his entertaining two-fisted aggressive style, and, most of all, his tenacity – fortified by the discipline of working a hard, daily job.

“I don’t get to recuperate longer like your average fighter, who might go back to sleep after running or lay around all day after training,” Cancio said. “I guess that’s a disadvantage, but it also helps me out, especially the digging and all that stuff. It’s just something that I have to do. I’ve got kids and I didn’t get the big signing bonus, I haven’t had the big paydays yet; this is something I’ve worked for my whole life, so I’m motivated to keep winning until I get to those big paydays, then maybe I can think about not working.”

Until then, expect Cancio to bring the ruckus and blue-collar determination to all of his fights, but especially against Machado.

“He didn’t have to work a fulltime job but the playing field is going to be even once the bell rings,” he said. “He’s the one who is going to have that doubt in his mind. He dropped me and I got up and I came forward. I hit him hard. If this time around he wants to stay in there longer than he has to, I’m going to do that for 12 rounds. I’m capable of doing that. I’ve been in with a lot of tough guys, like Rene Alvarado. I don’t know if he’s one of them.”

We know Cancio is.