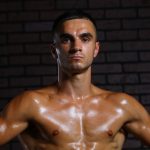 When Andrew Moloney and Joshua Franco fought in June, they did so on near-even terms before an 11th-round knockdown proved to be decisive for Franco on the scorecards.

On Saturday the pair met in a much anticipated rematch at the MGM Grand in Las Vegas, and this time Moloney, who is rated No. 8 by The Ring at 115 pounds, started fast. The Australian got the upper hand early before the fight was curtailed at the end of Round 2 due to Franco’s right eye swelling shut.

It appeared for all the world that Moloney struck his opponent’s eye with a thudding jab, however, referee Russell Mora disagreed and ruled that the injury was the result of a clash of heads.

“I did what I knew I could do and dominated Franco from the opening bell,” Moloney (21-1, 14 knockouts) told The Ring. “I landed some great jabs on Franco’s right eye, which swelled badly to a point that the doctor determined he could not continue to fight.

“Apparently, the referee had called that the eye was damaged from a clash of heads but this was not communicated to me and my corner.”

It was deemed that Franco could not continue at the end of the second round. Initially, Moloney celebrated but those celebrations were cut short, and he had to wait an agonizing 30 minutes while the Nevada State Athletic Commission repeatedly viewed footage of the opening round.

“I was very confident that the decision was going to be in my favor,” Moloney said. “Everyone around the ring watching the replays was indicating to me that they could not see any sign of a head clash, but multiple jabs landed directly on the right eye. I was shocked when the decision was announced as a no-contest.”

Also surprised was ESPN blow-by-blow broadcaster Joe Tessitore, who did a brilliant job talking viewers through what happened in the lengthy intermission. Also incensed were former world champions Andre Ward and Tim Bradley, who both agreed that Moloney landed a clean blow.

“Not just them but basically every single person who watched the fight.” said a frustrated Moloney.

“His team showed no class when we left the ring,” said the 29-year-old. “Some words were exchanged but it was left at that.”

Moloney’s manager, Tony Tolj, is keen to move things forward for his fighter as quickly as possible.

“We have had early discussions with (promoter) Bob [Arum],” said Tolj. “We’re heading to the Top Rank team headquarters on Monday to discuss further.”

Expect this to rumble on for a while yet and possibly end with a rubber match in 2021.