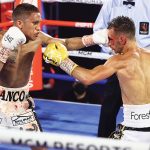 Australian junior bantamweight Andrew Moloney will be facing Joshua Franco for the second time in five months at the MGM Grand in Las Vegas on Saturday.

Moloney, who is rated No. 8 by The Ring at 115 pounds, dropped a 12-round unanimous decision to the Texas native in June and is eager to avenge his lone defeat.

“I’m extremely grateful that Top Rank have given me the opportunity to get my revenge against Franco,” Moloney (21-1, 14 knockouts) told The Ring.

“I am doing absolutely everything possible to make sure that I leave the ring on November 14 with (the WBA regular) belt strapped around my waist.”

When the two previously met, Moloney was dropped in the 11th round. That proved to be pivotal on the scorecards and prevented him from getting a draw.

“It was a close fight last time around and I was nowhere near my best in that fight,” Moloney explained. “This gives me great confidence that I can win this rematch convincingly.”

The 29-year-old boxer-puncher is keeping his cards close to his chest when it comes to game plans.

“I’d rather not go into detail about tactics,” he said. “But losing the first fight has definitely forced me to look over every area that I could improve on, both in and out of the ring.

“I believe that loss has forced me to make some big improvements and has lit a fire inside of me. I am now more hungry and more motivated than ever before.”

“I’d like to thank Top Rank for giving me this huge platform,” Moloney said. “This is my opportunity to really make a statement and show everyone that I am a much better fighter than what I showed in my first fight against Franco.”

Moloney knows that a second loss would be hugely damaging.

“This fight is extremely important for my career and my future,” he said. “I need to win this fight, not just for me but for my team and my family.”

Tony Tolj, who manages Andrew and twin brother Jason, is confident of another exciting, action-packed fight and is hopeful that Moloney will even the score.

“Fight one was a great fight and I’m sure fight two will steal the show,” said Tolj. “It’s Vegas and Andrew is going all-in.”

Franco (17-1-2, 8 KOs) was a talented amateur before turning professional in 2015. He was highly regarded before being upset by Lucas Emanuel Fernandez Leone (TKO 9) in March 2018. He has since become more battle-hardened, sharing 30 grueling rounds with Oscar Negrete (D 10, SD 10 and D 10). The 25-year-old is currently rated No. 6 by The Ring.

KELL BROOK VOWS TO SILENCE DOUBTERS, CLAIMS TO BE AT HIS BEST FOR CRAWFORD SHOWDOWN

Crawford vs. Brook, plus undercard action, will be broadcast live on ESPN in the US and is available via pay-per-view on Premier Sports in the UK. Premier Sports 1 is available in HD via Sky (412 & 429), Virgin TV (551 & 552) and online via the Premier Player, available on app and desktop. New subscribers to Premier Sports can easily sign up via the website – www.premiersports.com.