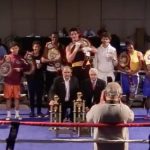 It all came full circle when the words boomed from the announcer’s microphone: “Your winner, blue corner, New Jersey franchise.”

Twenty-one years prior, in 1998, Johns’ father Anthony Williams was on the wrong side of that announcement. He had risen to the no. 3 ranking in the nation, beaten future Olympian Ricardo Juarez in the prelims but lost to Aaron Torres in the featherweight final of the National Golden Gloves. Using a consistent jab and a short left hook that couldn’t miss in exchanges, Johns of Newark. NJ finished the job his father had started decades earlier

“He did the right job and he’s a good listener,” said New Jersey Golden Gloves director Jose Rosario, who had won the National Gloves at 106 pounds in 1982. Rosario had been Williams’ trainer, and remembers Johns playing around the gym as a toddler. Now Johns, 24, trains with his father at Rosario’s Aspira Gym in Newark, and is the sixth national champ since Rosario’s team took over the NJ Gloves, and 13th overall.

What’s next for Johns? “Right now we’re gonna go home and figure out what he wants to do. If he wants to turn pro, I will help them out,” said Rosario.

Two other NJ boxers fell short in the finals as the no. 3 ranked 201-pounder Jamar Talley lost a decision to Den Tati-Mackaya, and Rajon Chance fell short on points in the 123-pound men’s final to Hawaii’s Asa Stevens,  an 18-year-old southpaw who won the flyweight title last year at the AIBA Youth World Championships in Budapest, Hungary.

Hawaii had plenty of success in the lower weight classes, with Breeanna Locquiao, a former soccer star at University of Hawaii, defeating Iowa’s Jacquelyn Cuddeback to win her third straight 106-pound women’s title, and Jazzelle Bobadilla defeating Lina Vezzani-Katano (NY Metro) to win the 112 pounds women’s title for the second straight year. Bobadilla and Locquiao are rated no. 1 and 2 at 106 pounds in the nation, respectively.

The only Hawaiian in the finals who fell short was Dalis Kaleiopu, the no. 2  ranked 141-pounder, who lost a decision to the no. 6 rated Marcell Davidson of Kansas City.

The most action-packed matches of the day came in the 152-pound and 178-pound men’s finals.

Orville Crooks (NY Metro) and Chavon Davis (Cleveland) were heated from the opening bell, trading southpaw left hands. Davis lost a point for a late punch after the first round which didn’t help his cause as Crooks won the 178-pound title, one of two champions from New York City. At 152 pounds, Morris Young Jr. (Michigan) put suffocating pressure on Kelvin Davis II (Washington DC) from bell to bell, just as he had throughout the tournament. Young scored two knockdowns of Davis in the third, which were the only knockdowns of the night, earning him a decision and the belt.

The post Anthony Johns finishes what his father started at National Golden Gloves appeared first on The Ring.