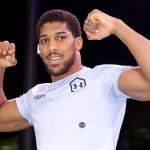 Heavyweight rivals Anthony Joshua and Tyson Fury could be set to meet twice in 2021, according to promoter Eddie Hearn.

Before the world champions can face each other, however, they have to take care of other business.

Joshua is due to defend his IBF, WBA and WBO titles against Kubrat Pulev in a bout that was originally scheduled to take place at Tottenham Hotspur Stadium on June 20, only to be postponed because of the coronavirus pandemic.

As for Fury, the holder of the WBC belt, he is set to go up against Deontay Wilder in a third episode of their rivalry.

A recent media report suggested Wilder — who lost the title to Fury in their February rematch — could be willing to step aside to allow a unification showdown between the Brits to happen next, provided he is first in line for a crack at the winner.

While Hearn says Joshua has “no problem” signing a deal to face Fury, he explained why the fight is not expected to happen before the end of this year.

“I had a conversation [on Thursday] saying, ‘Wilder is not stepping aside, we will take care of that fight, you take care of the Pulev fight, but let’s get a deal done for 2021,’” Hearn told Sky Sports.

“We have no problem signing now to fight Fury in 2021.

“It will work out better for both of them to box off those fights [and] then have a clear route, subject to Dillian Whyte being mandatory to Fury, to get [an undisputed title fight] done.”

Hearn also confirmed that any agreement is likely to include a rematch clause, setting up the potential for a hugely lucrative doubleheader between Joshua and Fury next year.

“It would probably be a two-fight deal,” Hearn said. “Any deal between Fury and AJ, you run it twice.

“It is not a condition of the deal but it was in their deal with Deontay Wilder, and it is the biggest fight in boxing, so it is likely you will see that twice.”

Fury confirmed in an Instagram Live post Thursday that he has no plans to pay Wilder to postpone a third clash, though Joshua is firmly in his sights.

“I’m going to take [Wilder] out again for the third time, hopefully at the end of the year, and then we’re going to go into 2021 with the biggest fight in boxing history between two undefeated British heavyweights, me and AJ, and we’re going to battle it out for all the gold,” he said.

The post Anthony Joshua has ‘no problem’ signing to fight Tyson Fury twice in 2021, says Eddie Hearn appeared first on The Ring.