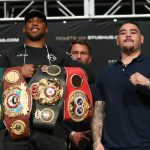 Carl Frampton, stop being so good at this because you will take away jobs for journos!

The Irish former two-time junior lightweight titlist sat down with IBF/WBA/WBO heavyweight titlist Anthony Joshua this week for his “Joe” vlog and did a commendable job asking solid queries.

He asked “AJ” what he learned from his fight with Wladimir Klitschko and AJ furnished gold. Then he asked the 22-0 Brit, who claims 21 knockouts, if he thinks he needs to not only beat Andy Ruiz on Saturday at Madison Square Garden but also look good doing so (at the 18:57 mark.)

“(Breazeale) was a big man as well, so to knock him out takes some real power. And like the comparisons in the division right now are hard because I’m a completely different fighter to Wilder. I like to go in there; I like to break down my opponents, know where the gaps are. He’s a bit more, just try to go in there and knock him out. I do wanna take Ruiz out but if it doesn’t happen, I think looking good is important, so I just want to go in there and show how good I am!”

Right, noted. So we know skills pay the bills and some times very handsomely. However nothing whets appetites, conjures that buzz like the KO. All these decades later, Mike Tyson KO compilations still summon massive YouTube clicks. (The following video has 27 million views!)

Yep, I’m thinking Joshua wants to stay smart, not engage in a shootout…but he knows darn well a conclusive finish, stopping Ruiz, plays much, much better than a points win in a more safety-first manner. The KO ending helps his leverage and bargaining power as he moves toward a fight with lineal champion Tyson Fury or Deontay Wilder in the first quarter of 2020.

Frampton kept things moving: What’s next after this one?

“God willing I win,” AJ answered, “I wanna sit down with Tyson Fury and see what it’ll take to make the fight because Wilder is fighting (Luis) Ortiz (in a rematch). And as a fan of the sport, look, it would be easy to fight Joe Blogs next fight five times and try to sell out an arena but I just feel I’m robbing myself. So, I wanna challenge myself with the likes of Fury or Wilder, so I wanna sit down; I’m gonna try and get a meeting with Fury now and see, if I win Saturday, what it’ll take to get this fight made.”

Hey, maybe that cheers you up, you folks who get tired of being stuck at the marination station. Talk to me…Do you think AJ seeks that stoppage versus Ruiz (32-1, 21 KOs), who lost a majority decision to Joseph Parker, in his lone defeat?

The post Anthony Joshua opens up to Carl Frampton on Ruiz, Wilder and Fury appeared first on The Ring.