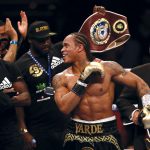 Warren, who runs Queensbury Promotions, stated that the Yarde-Arthur fight will headline a 40th anniversary card. The hall-of-fame promoter’s first show took place on December 1, 1980 at the Bloomsbury Centre Hotel in London.

Yarde, who is rated No. 10 by The Ring at 175 pounds, and Arthur share one common opponent, whom they each faced last year. Yarde (20-1, 19 knockouts), who resides in London, dropped Dec Spelman en route to a sixth-round stoppage, whereas Manchester’s Arthur (17-0, 12 KOs) defeated Spelman by unanimous decision on July 31.

In his most recent fight, on October 12 of last year, Arthur overcame a cut above his left eye to defeat Emmanuel Anim by unanimous decision.

Yarde has won his last two bouts since losing by knockout to then-WBO light heavyweight titleholder Sergey Kovalev on August 24 of last year.

The post Anthony Yarde-Lyndon Arthur set for December 5 in London appeared first on The Ring.