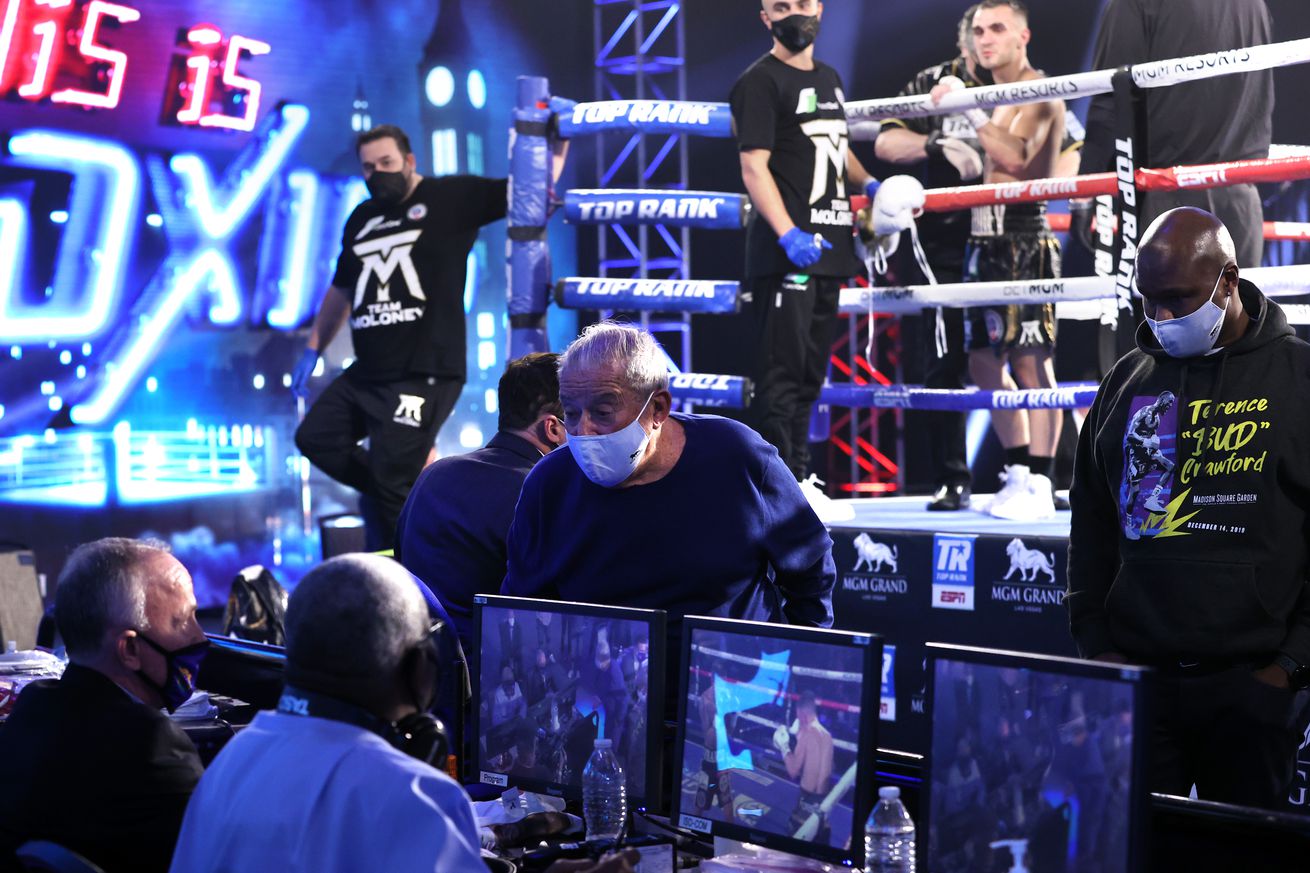 The Top Rank promoter was not happy last night, to say the least.

Last night’s Crawford-Brook card from Las Vegas featured a highlight reel finish in the main event, with Terence Crawford stopping Kell Brook in the fourth round to retain the WBO welterweight title, but those who watched before the main event were, uh, “treated” to a whole other side of boxing.

That would be the absurd side, the ridiculous side, the side that seems so incompetent and weird that you can’t help but laugh somewhere in the 26 minutes it took Nevada officials to review three minutes of footage that decided the outcome of Joshua Franco’s rematch with Andrew Moloney.

Long story short: Franco kept the WBA’s secondary “world” title at 115 pounds via no-decision, after it was ruled an eye injury suffered in round one was caused by a clash of heads. Since the fighters only competed two rounds, it does not go to the cards, and it isn’t a TKO. It’s a no-decision.

But the call by referee Russell Mora was debated, to say the very least. The ESPN production truck alerted TV viewers and the broadcast team of Joe Tessitore, Tim Bradley Jr, and Andre Ward well before the fight was stopped that there didn’t seem to be a clash of heads in round one.

After 26 minutes of review and debate and the ESPN broadcasters really pushing the idea that there was not a clash of heads, the Nevada commission held Mora’s decision. And promoter Bob Arum, who has been running exclusively at the MGM Grand “bubble” in Las Vegas since June — about 20 shows overall — was incensed by the commission’s decision:

Bob Arum says he’s going to “Get the fuck out of Vegas.” #Boxing #FrancoMoloney #CrawfordBrook pic.twitter.com/TrebUsUydr

Arum argued that the commission should have called for the replay earlier to be sure about Mora’s ruling, but that once they did it, anyway, they chose to stick by an error made by the referee.

“Instead waited for the end of the fight, which they’re still allowed to look, and they kept with it to protect the referee, who didn’t know what the hell he was doing!”

Asked what he said to Bob Bennett of the Nevada commission — Arum was seen on camera talking to (or at) Bennett at one point — Arum replied, “I’m just telling him, I’m absolutely disgusted! People blame me because I’m the promoter, I got nothin’ to do with the goddamn thing! I just want a fair adjudication! They made a mistake, the referee made a mistake, and they have his back. It’s clear! It’s not even close!”

The 88-year-old Hall of Fame promoter also had a very simple message for what he can do about it now: “Get the fuck out of Vegas!”

Now, a couple things have to be said here. First of all, it’s very questionable that Arum would have been this fired up about Mora’s call if the roles had been reversed, if Moloney were the one whose belt was saved by a questionable ruling. After all, Moloney’s a Top Rank fighter, and Franco is not, Franco’s promoted by Golden Boy. That’s Bob Arum’s job, to advocate for his guys, but it should be mentioned.

Second, it’s unlikely that Arum is going to suddenly pull all his fights from Las Vegas. For one thing, they’ve got a good, effective set-up for a very complicated time in the sport, it has worked nicely for five months now, and there is no end in clear sight for how boxing has to operate at the moment. Having a legitimate base of operations like this is a huge plus. For another, Top Rank itself is based in Las Vegas, which makes it generally easier for the company to do the business they’ve been doing. Moving to California or somewhere certainly wouldn’t be impossible, but cooler heads figure to prevail here.

Top Rank do only have one more show currently set for “the bubble,” the Dec. 12 event headlined by Shakur Stevenson vs Toka Kahn Clary. Again, no real end to the current situation is in sight, but at the moment they do just have the one more show officially set for the location.

Bob Arum’s been around a long time and he’s yelled at or about a lot of commission officials. And we also aren’t totally out of the woods on the Franco-Moloney thing, probably. There remains the chance that a further review could see the result over-turned and made a TKO win for Moloney. And if that were to happen, you could probably expect at least some people to wonder how much influence Arum’s open threat to take his fights out of Nevada might have had on the decision.