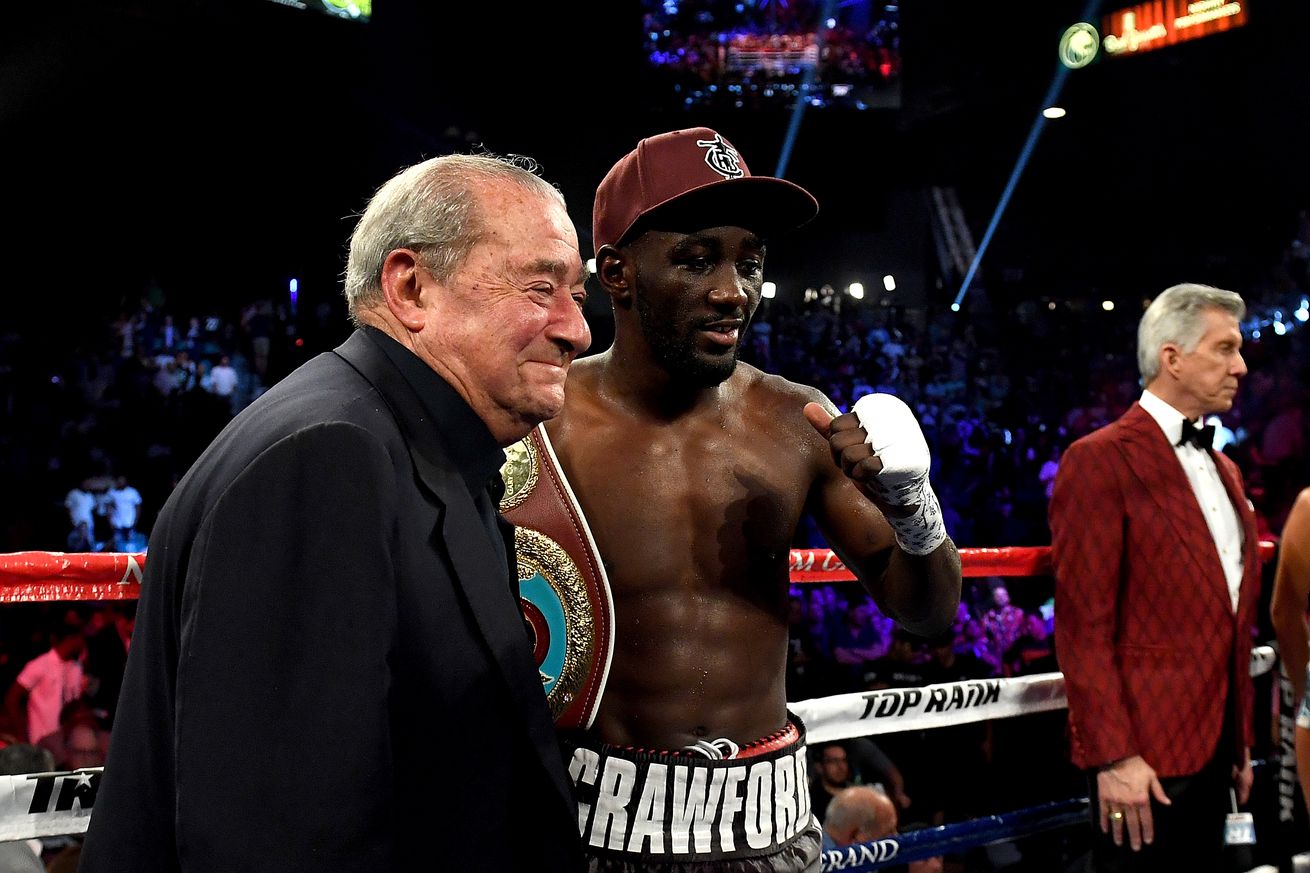 The Top Rank promoter talked about a range of big subjects in a recent interview.

Top Rank promoter Bob Arum sat down and spoke with Crystina Poncher in a two-part interview about his plans to get boxing back, the limitations the sport and its matchmaking will face without fans, and some big fight ideas including Crawford-Spence, Crawford-Pacquiao, and more.

Part one can be seen here, and part two here.

On returning to active boxing

“Being realistic, we hope to be operational at the beginning of June, to get a secure facility, either in California or Nevada or Texas, and work with the athletic commission so that we can begin to put fights on for ESPN on a regular basis, maybe two or three times a week, of course without spectators.”

“There’s a lot of steps that have to be taken, but it could be done. June, July, and August, certainly, we’ll be able to do events, but without spectators. We could do two and three events a week, televised for ESPN and ESPN+, and we wanna make sure that when we are in operation, we are doing it safely and in accordance with the appropriate regulations of the various boxing commissions where we’ll be putting on the events.”

On Fury vs Wilder 3 and big fights without spectators

“It’s one thing to take events that were done with two, three thousand people and do them now without a crowd. It’s not nearly as egregious as doing a Fury-Wilder fight without fans, when the fans in the last fight put in almost $17 million into the coffers in purchase of tickets. Now how do you replace that $17 million? I mean, you don’t. You can’t. A Fury-Wilder might have to wait a couple more months until we can go back to full spectators. For a sport like boxing, with big events where the gate money is so much a big percentage of the revenue, I don’t see how you can do it without spectators.

“Could we do a, let’s say, (Oscar) Valdez and (Miguel) Berchelt fight? I don’t know. I don’t really have the answers. Our first order of business is to find out how we can get up and running in whatever format is required. If it’s not to do title fights, so be it. We’ll do the best we can. People will understand. There are a lot of good 10-round fights that we can put on.”

On Crawford vs Spence

“If we hadn’t had this coronavirus situation, and we had continued doing fights in March and to this day, we would be talking now about a Crawford-Spence fight towards the end of the year. I really believe that would have happened. I’m optimistic that it’ll happen next year once this situation clears itself up, once we’re operating as usual again.”

On Crawford vs Pacquiao

“Pacquiao and his people have reached out to me about the possibility of a Crawford fight. We were hopefully thinking about scheduling that fight outside of the United States. We’ll have to see. But it’s certainly a very interesting fight. Once this clears up, I think we have a way where it can happen.”

“The fight I’m looking forward to is Fury against Pulev after Pulev knocks Joshua out. I’m not counting on Joshua for Fury, because after Pulev gets finished with him, there won’t be a Joshua.”

“They had very relaxed rules, relatively relaxed rules, about this pandemic in Japan, and now their number of cases and situations in Japan have really picked up. So Japan now is under a state of emergency. One thing we were considering was having Casimero go over to Japan and do that fight in Japan, which at one point appeared possible. It’s no longer possible. And Inoue won’t be able to come here any time soon. So unfortunately, it looks like we have to put that fight on the back burner. But Casimero has stayed in the United States, and perhaps we can talk to his people and do another fight for him, because he’s a champion of one of the organizations that Inoue is not a champion of.”

On the status of Herring vs Frampton

“Carl was pushing before all this happened for the fight to be outdoors. And Frank Warren, who would be promoting the fight, always wanted to be in the indoor arena in Belfast. When they can do live fights, I would think we would still go to Belfast. They’ve got a really lovely indoor arena that seats about 10,000 people, and that would be fine for this fight.”