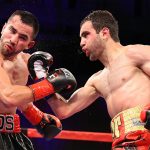 Hovhannisyan, who is guided by acclaimed trainer Freddie Roach, will return to the ring on March 28, when he faces Colombia’s Jose Sanmartin at The Forum in Los Angeles.

The 12-round bout, along with the main event between unbeaten welterweight Vergil Ortiz Jr. and Colombia’s Samuel Vargas will be streamed live on DAZN.

Hovhannisyan (18-3, 15 knockouts), who is originally from Armenia and now resides in Los Angeles, is rated No. 10 by The Ring at 122 pounds. In his last bout, on September 5, the 31-year-old knocked out Franklin Manzanilla at the end of Round 4. He has won his last four bouts, all by knockout, since a decision loss to WBC titleholder Rey Vargas in May 2018.

“Ever since signing with Golden Boy, my career has been taken to another level,” said Hovhannisyan, whose most impressive victory thus far came over contender Ronny Rios. “I got many great opportunities, including a fight against Rios and a world title challenge against Vargas. I’m happy to sign with Golden Boy again so we can score a great win and look for even bigger fights.”

“Azat Hovhannisyan’s career is a perfect example of the outstanding way that we develop our talent,” said De La Hoya. “Hovhannisyan had a tough start to his career, despite being very talented. But working together with his excellent team, we were able to hone his brutal instinct in such a way that would maximize his potential and make him into (one) of the most dangerous contenders in the junior featherweight division. I’m positive that he will become a world champion.”

Sanmartin (30-5-1, 20 KOs) of Barranquilla, Colombia, has won his last four bouts since losing by knockout to Emanuel Navarrete in June 2018.