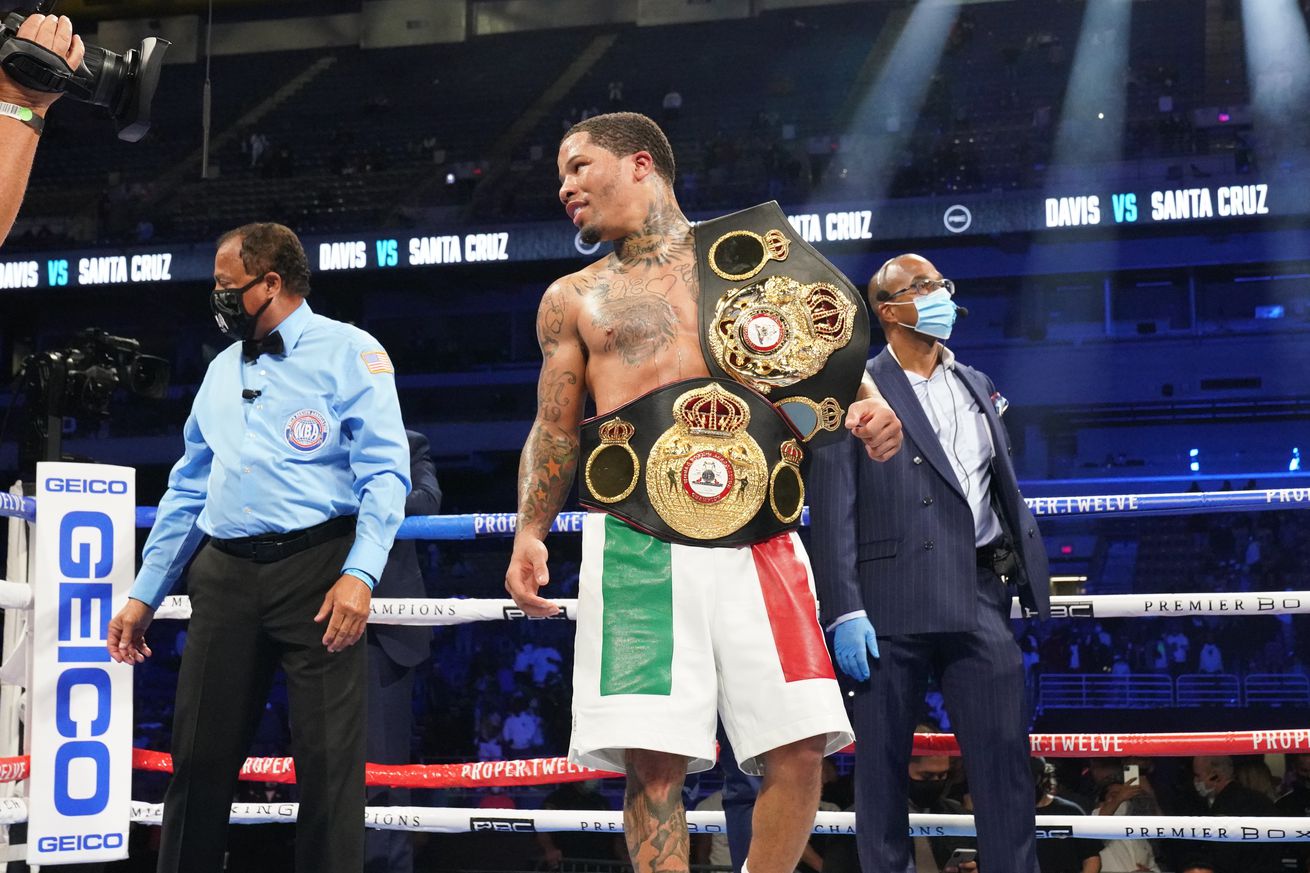 It was a huge week of action overall, and we’ve got plenty to discuss in this week’s update, with Tank Davis, Oleksandr Usyk, Naoya Inoue, and much more to consider.

Not nearly as busy a week as this past one, but a few fights of note.

Notes: I’m not trying to go insane over Oleksandr Usyk’s solid decision win over Derek Chisora. Chisora’s not exactly an elite heavyweight, though he’s probably top 15-ish still, with all his limits and the 10 losses. But I do believe that Usyk’s win over Chisora is a better heavyweight win that either Parker or Ortiz have in literally years. Parker’s last win on that level is probably Andy Ruiz Jr back in 2016, which was a close fight and a good win for him. Maybe you’d argue for Hughie Fury in 2017; I wouldn’t, but even then you’re going back to 2017. Parker’s last three wins are over Alexander Flores, Alex Leapai, and Shawndell Winters, and he’s set up to fight Junior Fa next. For Ortiz you probably have to go back to 2015 and Bryant Jennings, really. Maybe you’d argue for Christian Hammer last year, but I wouldn’t. I don’t think Usyk would be any clear favorite over either, but I think he’s earned this spot at the moment.

Notes: It’s not that I think Jaime Munguia dominated Tureano Johnson on Friday, because he didn’t, but he beat him clean and fair by destroying his lip for a stoppage in six. Munguia took some shots, but he’s always going to take shots. He stood up to them and gave better back. Munguia is going to eventually meet a wall, I think, but he’s doing the jobs in front of him and can fight. Korobov will be back in action later this month; if he looks really good against Ronald Ellis, it could switch back.

Notes: Both Regis Prograis and Mario Barrios won on Saturday in San Antonio, with Prograis stopping Juan Heraldez in three and Mario Barrios finishing Ryan Karl in six. Both wins were expected, both were expected to be about as one-sided as they were. Neither proved anything new, but they did show that even after layoffs they were levels above the opposition they faced.

Notes: I’ll get more into Gervonta Davis in the next division down the page, because he’s now ranked in two classes, which makes for himself and Canelo with that standing right now. But even though that fight with Leo was at 130, I just can’t really sit here and go, “Yeah, that guy shouldn’t be ranked over Luke Campbell or Richard Commey.” I mean Canelo’s sitting No. 2 at 168 and has only fought once in that division. Canelo’s a weird case in that he intends to fight at 168 but he’s not going to fight anyone right now, and for a minute he was ranked at 160, 168, and 175, but anyway, that’s a whole other thing. Luke Campbell can make his big case in about four weeks. If Luke Campbell gives InstaTweet the what’s for, then he might fly up to No. 3. This division has a very clear No. 1, for the moment — in my opinion — a very clear No. 2, and then you have a lot of good fighters with question marks, some are young, some are veterans.

As for the new No. 10 man, George Kambosos Jr replaces the man he defeated on Saturday, Lee Selby. Though the DAZN commentary team were certain Selby had won, Kambosos deserved the victory, and as we saw with the Ritson-Vazquez robbery, the Sky Sports team reportedly had it the way most everyone else saw it, too. Selby fought OK and is a solid fighter at 135, but he’s not what he was at his best at 126, either. Kambosos is a fine fighter himself, and I edged him into this slot over Isaac Cruz, who also won an IBF eliminator on Saturday, in more rousing fashion. Kambosos-Cruz is the most likely fight for both of them to come next, even though Kambosos seems really certain he’s now guaranteed a shot at Teofimo. The IBF could order that, but they ordered two eliminators to fill the No. 1 and No. 2 slots, and usually that means those two winners then meet in a final eliminator to actually get a title shot. Kambosos, with respect to him, does not have the name value to be demanding an immediate shot at Lopez, who is maybe the hottest name in boxing. And as much as Kambosos might resent it if he really thinks he’s been fooled if/when the order to fight Cruz comes down, as a boxing fan I would loooove to see Kambosos-Cruz. Sign me up for that for sure.

Notes: Tank’s back in at 130, as he hopped back down in weight to crush Leo Santa Cruz via highlight reel KO on Saturday, taking the WBA belt, which is Davis’ third at 130 pounds. I think you can argue Gervonta into the No. 1 slot, but I am admittedly a big Berchelt supporter, and while I’ve tried to balance my fandom with him as far as P4P goes, I’ve probably gotten as reasonable as I’m going to become. You might not believe this but literally every web site rankings list has likes, dislikes, favorites, and sheer opinion involved. I’m just OK with admitting that. I’d pay $100 for Davis-Berchelt on PPV. It’s not worth $100, but I’m just saying I, personally, would pay $100 for that fight if it could be made, if that helps encourage Mayweather and Top Rank to explore the space on that idea.

As for Leo, he drops from No. 2 to No. 5. He could conceivably even go back down to 126; he never did officially vacate his WBA “super world” belt there, perhaps in case something like this happened. He actually does have a world title to defend still, which could guarantee him a world title fight right away next time out.

This is a division potentially taking new shape. If Tank sticks here even for another fight or two, he’s a top player, obviously. Shakur Stevenson absolutely looks to be on his way to the top tier of the division. Oscar Valdez has a chance to cause some waves with Berchelt in December. Joseph Diaz Jr is right in what should be his prime and I think is still somewhat underrated. Guys like Herring and Frampton may be on borrowed time due to their ages — Herring doesn’t seem like he wants to fight forever even if he doesn’t lose — and we’ve perhaps seen the very best of Tevin Farmer. Rene Alvarado is a fringe guy, really. There are younger guys like Chris Colbert, Xavier Martinez starting to get a push. BoxRec loves Shavkatdzhon Rakhimov’s record far more than I do.

Notes: Just for the record and future reference and all, if Santa Cruz officially declares his intention to move back down to 126, he’ll be dropped from the 130 rankings and reinstalled here, probably at No. 3.

Notes: Another fight, another strong, impressive win for Naoya Inoue, stopping Jason Moloney in the seventh round. Inoue dominated Moloney — I didn’t get to watch live, but did watch the fight on Sunday afternoon. Inoue is the clear class at 118 for now, and a fight next with either Casimero or the Oubaali-Donaire winner would be terrific to see. There are other options I’d find acceptable (Rigondeaux, Jerwin Ancajas coming up in weight) if need be, but I really would like to see him against Casimero or the Oubaali-Donaire winner and get closer to full unification and a true clearing out.

I’m not overly downgrading Moloney based on losing to Inoue, either. He drops from No. 7 to No. 9, but the division is rather shallow in terms of proven fighters. Oscar Negrete being No. 10 tells you that, I think. Good fighter, mind you, but if, say, Lee McGregor impressively takes the European belt from Karim Guerfi on No. 11, McGregor probably takes that spot. Getting sparked by Inoue doesn’t mean you’re not good. Moloney is good. Inoue is special.

Notes: Friday’s Nakatani-Magramo fight is for more than just the vacant WBO title. The winner is going to bounce up over Rosales and Waseem at the very least, and frankly I’ll probably more strongly consider those last four spots after we get done with Nakatani-Magramo, it could look a lot different next week. Boxing is weird with a rough way of comparing records a lot of the time, so a No. 9 beating a No. 10, for instance, can quite often say and prove a lot more than what Nos. 5 through 8 have.

Notes: Elwin Soto won again on Friday, beating Carlos Buitrago in a tough fight, one Soto admitted was a stylistic challenge. I like Soto; I don’t think he’s a great fighter, he’s got flaws and limitations that seem fairly obvious, but he comes to fight, he’s scrappy as hell, and he’s on what may be the run of his career.

Notes: Last week’s No. 9, Mariana “Barbie” Juarez, lost on Saturday to Yulihan Luna in Cancun, dropping the WBC bantamweight title, so she’s out. Daniela Romina Bermudez was also supposed to fight, or at least at one point was scheduled to fight on Saturday, but appears to have not. In at a cautious No. 10 this week is Mikaela Mayer, who won her first world title on Saturday, beating Ewa Brodnicka for the WBO 130-pound belt.

I really do think Mayer is this good; the BoxRec P4P list, for what it’s worth, has her at No. 8, so even though there are things I don’t agree with there — like Shields being No. 6, for instance — I think it at least indicates I’m not TOTALLY off my rocker here. Women’s boxing is evolving, and rather rapidly, the last few years in particular.

Frankly, as far as pure ability, she might deserve to be higher. Listen, Acuna, whom I have No. 9 now, is 44 years old. We’ve talked about it some, but the women coming into the sport with deeper amateur backgrounds, high level international competitions like the Olympics and World Championships and whatnot, and even just getting better, more proper training at younger ages, is helping develop frankly superior fighters compared to the general best of what we’ve seen before. Not everyone, obviously, there have been some great standouts over the years, but the pool is deeping, slowly but surely. Fighters like Shields and Katie Taylor were huge amateur standouts, obviously, and while Mayer didn’t achieve quite what they did, she was a bronze medalist at the World Championships in 2012 and an Olympian in 2016.

This will keep happening as the years roll by. And it will still take years to really develop true depth, but the course has been plotted, and it’s very encouraging. Mayer was levels above Brodnicka. As for others in her weight class, I have seen Maiva Hamadouche fight, and she is levels above Hamadouche, too. Terri Harper is good and even more she’s young and promises to get better; right now I think Mayer probably has too much skill for her. If Mayer can’t get unification next, which she wants, I wouldn’t mind seeing her fight someone like Ronica Jeffrey. And Delfine Persoon, for what it’s worth, plans to fight at 130 from now.