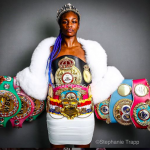 The scrap, pitting the talented and talkative gold medal collector from Michigan versus a savvy pugilist who’ll trek over from Canada, will unfold on Showtime, a Salita Promotions event.

Shields’ WBC and WBO 154 pounds titles as well as Dicaire’s 154 pound IBF belt will be up for grabs, as will the WBA crown, a so-called “super” crown. This is the first “super” title bestowed upon a female by that sanctioning body, for the record.

“I can’t wait to make history again on May 9,” said Shields (10-0 with 2 KOs) in a release sent out by promoters. “Fighting in Flint in front of all my fans has been a dream of mine since turning pro. Having the opportunity to make history by fighting for the undisputed title in a second weight division is something I’m very proud of. Fighting against undefeated IBF 154-pound champion Marie-Eve Dicaire continues my quest to fight the very best in women’s boxing. And headlining on Showtime again will continue my goal to lift women’s boxing to new heights. I’m going to give Flint and fight fans all over the world a night to remember on May 9!”

I messaged Shields, and asked a follow up question. On paper, how do you think Dicaire (17-0 with 0 kayoes; age 33) measures up to your other foes?

“She is a really good, heavy-handed boxer,” Shields shared. “Even though she has zero kayoes! She does hurt the girls she fights and moves a lot on her feet, but she fights more than Christina Hammer. She actually comes forward. I look forward to us fighting.”

Show of hands time…Who thinks Dicaire can be the first to defeat the Michigan pugilist?

Shields was going to strut her stuff in Flint in October, on Oct. 5, but the faceoff versus Ivana Habazin got scrapped the day before, when Habazin’s trainer was attacked at the weigh in. The re-set clash was moved to Atlantic City, on Jan. 10th, and Shields had zero difficulty in snagging her tenth win as a professional.

“I am very excited for this opportunity and it is an honor to face an opponent like Claressa Shields,” said Dicaire, in the release. “I am thankful to my promoter Yvon Michel and everyone involved in making this possible. For me, this is a dream come true. I will be prepared the best I can be and I am ready to leave everything in the ring to win the fight!”

In the four-belt era, seven fighters have been undisputed in one division, including Shields, Katie Taylor, Cecilia Braekhus, Bernard Hopkins, Jermain Taylor, Terence Crawford, and Oleksandr Usyk. The straight-talking Shields, who turns 25 March 17, became the fastest fighter in history, male or female, to win world titles in three different weight divisions, passing Vasiliy Lomachenko and Kosei Tanaka, who both accomplished the honor.

Showtime’s Gordon Hall spoke on Shields, and how Sho has a history of featuring female fighters. “Showtime has a long history of featuring the best in women’s combat sports, whether it was with Gina Carano, Cris Cyborg and Ronda Rousey in MMA, or Laila Ali and Christy Martin in boxing,” said Hall, executive producer of this forthcoming event. “Shields vs. Dicaire will be our 12th women’s boxing event since 2017. Claressa’s bout with Dicaire represents another historic battle of unbeatens and attempt for another ‘first’ on SHOWTIME as Claressa looks to become undisputed in two weight classes.”

Prior to the Habazin tango, Shields, for her previous four battles, was a middleweight, for the record.

Promoter Salita says that this matchup is a solid pairing. “In Claressa Shields and Marie-Eve Dicaire, we have the two best junior middleweights in the world and two undefeated champions fighting for the undisputed world championship. In addition to her already historic list of firsts, if victorious, Claressa will become the first two-division undisputed champion in the four-belt era. It will be a triumphant night in Flint on May 9.” So, truly, on paper, this is a solid pairing? “Dicarie is ranked number one on Boxrec at 154 pounds, and is regarded as the best junior middleweight in the world. Claressa always wanted to fight the best possible champions and contenders every fight. This is one of the best fights of the year !”

Shields became the first American boxer in history – male or female – to win two consecutive Olympic Gold Medals, turned pro following the 2016 Olympics, and is a role model to many for having persevered through a trying upbringing, and instability at home. The fighter has different angles to her personality. Here, it looks like an interviewer asked a woeful question. Farhood, was that you? (Trapp photo)

“Claressa Shields continues to be a beacon of light and a trailblazer for women’s boxing, women’s sports, and boxing overall,” said Mark Taffet, Shields’ manager. “I’m proud to be a part of her journey.”

The Flint fighter isn’t shy about being proud of her accomplishments, and will from time to time get in scraps on social media. Thus, she can boast having ample fans tuning in to her clashes….and also persons tuning in hoping she gets her tail kicked. Yes, Floyd Mayweather enjoyed the same dynamic.

The 33-year-old Dicaire (17-0) is from Saint-Eustache, Quebec, Canada, and started karate at the age of six. One eye-opening element of her record is her KO ratio: 0%.

She hasn’t stopped a single foe as a pro.

Could she rise to the occasion and flip the script on May 9?

It’ll be a high hurdle; Dicaire will be fighting outside of the province of Quebec for the first time as a punch-for-pay practitioner.

The post Belt collector Claressa Shields wants to beef up her yield; “GWOAT” vs Dicaire May 9 in Flint appeared first on The Ring.