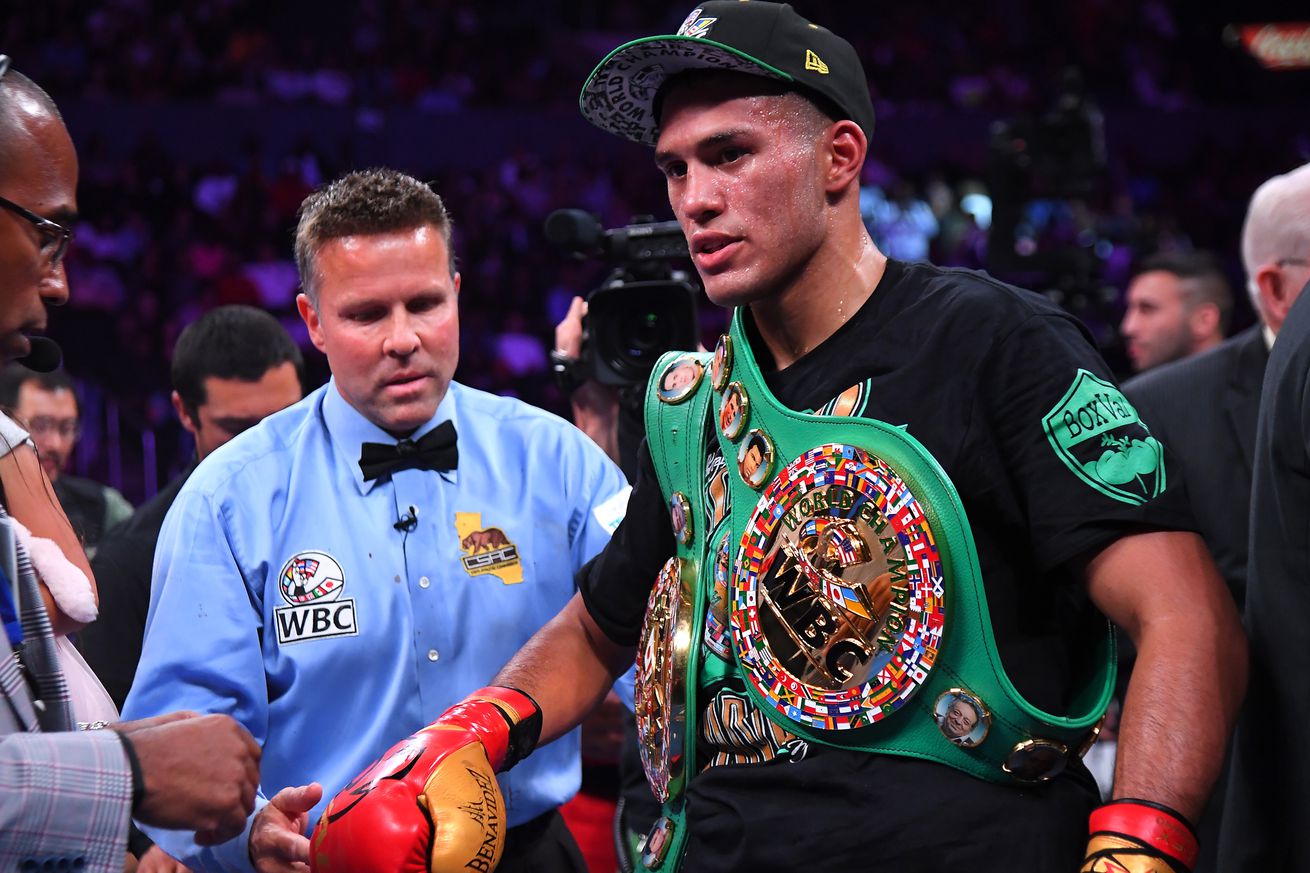 Benavidez will still face Roamer Alexis Angulo, with Otto Wallin in the co-feature.

David Benavidez was scheduled to defend his WBC super middleweight title against Roamer Alexis Angulo on April 18, but of course that was canceled by the coronavirus lockdown and shutdown of boxing.

Now, the fight is being rescheduled for Aug. 15, according to Mike Coppinger, still on Showtime, who appear to be setting up shop at the Mohegan Sun in Uncasville, Connecticut, where they also plan to run on Aug. 1 with Stephen Fulton Jr vs Angelo Leo for the vacant WBO junior featherweight title.

The Aug. 15 event will also feature a heavyweight co-feature between Otto Wallin and Travis Kauffman, first reported by Keith Idec, who also noted the show is scheduled to be a tripleheader.

The date for the event also means that we’ve got a head-to-head situation that night between Showtime and DAZN, which will air Matchroom Boxing’s U.S. return from Tulsa, featuring Julio Cesar Martinez vs McWilliams Arroyo and Cecilia Braekhus vs Jessica McCaskill. But all in all it’s hard to complain right now; it’s good to get a schedule filling up and having more outlets getting back into the game.

Benavidez (22-0, 19 KO) is one of the more promising young fighters in the game, a 23-year-old two-time titleholder (he was stripped the first time for testing positive for cocaine), and has something of a case right now for being the sport’s top super middleweight, depending on your criteria and all that. He last fought in Aug. 2019, beating a game Anthony Dirrell to take back the WBC belt.

The 36-year-old Angulo (26-1, 22 KO) is a Colombian based in Miami, and this will be his second crack at a world title. He lost a shutout-level decision to Gilberto Ramirez in 2018, but being fair, Ramirez fights nothing like Benavidez, and Angulo has come back with three straight wins, including a good victory on Jan. 30 over previously-unbeaten prospect Anthony Sims Jr.

The 29-year-old Wallin (20-1, 13 KO) is most famous for his last fight, a closer-than-scored loss to Tyson Fury in Sept. 2019, where he had Fury badly cut, and in all reality in a different fight with different levels of money on the line for the A-side, it was the sort of cut that would have stopped a fight, and it was caused by a punch so it would have — and really maybe should have — been a TKO win for Wallin. Other than that, his level of opposition has been low, but the 6’5” southpaw Swede, now based in New York, is an intriguing name in the division.

It is worth noting that Wallin tends to have awful luck when scheduled to fight on Showtime, so keep your fingers crossed for him.

Kauffman (32-3, 23 KO) is a 34-year-old scrapper who hasn’t fought since a Dec. 2018 loss to Luis Ortiz. He was down three times before being stopped in the 10th and final round, but Kauffman can crack, he had Ortiz buzzed a bit in that fight. He’s also lost to Amir Mansour and Tony Grano, and if Wallin is as good as his handlers hope he is, he should win, but Kauffman is one of those guys that comes to fight.