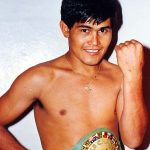 Mexican knockout artist Jose Luis Ramirez was a two-time lightweight titleholder in the 1980s, and he regularly tested the best fighters of his generation during a 17-year professional career.

Ramirez was born in Huatabampo, Sonora on December 3, 1958. He is the second oldest of 10 children. His father ran a market stall selling vegetables with help from his mother, who also tended to the children.

“When I was a child, my life was good,” Ramirez told The Ring through Diego Soto. “My dad worked in the market when I was in school, but one time my dad got sick and stopped working for many months. Me and my brothers and sisters went to [work at] the market. It was a tough time.”

When Ramirez was in the third grade, he vividly remembers encountering boxing for the first time.

“I watched a fight on TV of Mexican boxer Vicente Saldivar,” recalled the former champion. “When I saw that fight, I fell in love with boxing. I went to the local gym and started hitting the bags and sparring with other kids.”

Without any amateur experience whatsoever, the young southpaw turned professional at 14 years old.

“I wanted to fight for money,” Ramirez said. “My dad didn’t want me to be a professional that young. He told me, ‘You can make your pro debut, but first you have to have the first communion.’”

After obeying his father, Ramirez debuted with a sixth-round stoppage of Mario Amparan in March 1973.

The heavy-handed Sinoloa native won his first 21 fights before dropping a 10-round decision to the unheralded Sergio Enriquez. Shortly afterwards, he decided to move to Guadalajara to further his career. A friend gave him a lift and they stopped in Culiacan for one night. Taken by the new location, Ramirez elected to stay in Culiacan and joined the Zurdo Felix gym. Ramirez in his prime.

In April 1978, Ramirez, who was still a teenager, found himself matched again bantamweight and featherweight great Ruben Olivares. It was supposed to be a passing of the torch, however, nobody told the old warrior and he sensationally knocked out Ramirez inside two rounds. It would be the only time in the iron-jawed Mexican’s career that he would lose inside the distance.

“Zurdo” returned to action quickly, posting 24 consecutive wins and claiming the Mexican lightweight title, which helped earn him a bout against boxing superstar Alexis Arguello in Miami, Florida in November 1980.

Ramirez performed admirably but dropped a 10-round split decision that he still contests.

“I remember when the fight was over, I told Arguello, ‘They gave you this decision,’” Ramirez revealed. “And Arguello told me after this fight that he was going for the [lightweight] title and that if he won he would give me a rematch but he never did.”

After getting back to winning ways, Ramirez met the hugely popular Ray Mancini in a de facto eliminator to face Arguello in the summer of 1981 but he dropped a wide decision.

Ramirez went on to defend his Mexican title and he also annexed the NABF belt. When the great Arguello moved up in weight, he relinquished his WBC crown and Ramirez was matched with fellow-big puncher Edwin Rosario for the vacant belt in San Juan, Puerto Rico in May 1983.

After a slow start Ramirez grew into the fight but it wasn’t enough and he lost a close unanimous decision.

The two met in a rematch 18 months later and this time Ramirez would not be denied. He stopped Rosario in the fourth round of a wild fight.

“The rematch against Edwin Rosario in Puerto Rico was the best win in my whole career,” Ramirez said proudly. “I went down twice in the early rounds and came back to win by knockout.

“There was a lot of tension around [the arena]. When the fight was over, the Puerto Rican fans were provoking me and my team, but we had protection so nothing happened.”

Ramirez dropped the title to another Puerto Rican star Hector Camacho in his first defense in August 1985.

“He was a very good runner in the ring,” laughed Ramirez.

After this setback, Ramirez’s manager-trainer, Ramon Felix, brokered a deal with the Acaries brothers that allowed the former titleholder to stayed active in France. Ramirez won seven fights and positioned himself to face tough Guyana-born Terrence Alli for the vacant WBC 135-pound strap that Camacho had abdicated.

“That was a very big fight,” said Ramirez, who prevailed by hard-fought 12-round unanimous decision. “It was a tough fight for me.”

In his first defense, he impressively stopped former titlist Cornelius Boza-Edwards in five rounds, and then he faced met star Pernell Whitaker.

“It was a tough fight because of his style, but I remember the victory against Whitaker,” Ramirez said of his highly contentious 12-round split decision win in France. “It was one of the biggest wins of my career. People always say that [Whitaker won]. It was a very close fight but, for me, I won, although I respect what people say.” Ramirez (left) at war with friend and countryman Julio Cesar Chavez. Photo from The Ring archive

Ramirez returned to the U.S. and met former stablemate and rival titleholder Julio Cesar Chavez in a unification matchup in Las Vegas.

“It was a big promotion,” Ramirez said. “I felt there were not a lot of punches in the fight, I don’t know why.”

Chavez buckled his friend’s legs in the fourth round and got the better of proceedings until a clash of heads opened a cut on Ramirez’s forehead, bringing the bout to a premature end in the 11th. The fight went to the scorecards and Chavez was the victor.

Such was their closeness, Chavez’s now ex-wife is Ramirez’s daughter’s godmother.

When Chavez vacated to move up in weight, Ramirez took a rematch with Whitaker, who had since claimed the IBF title. The two also contested the vacant WBC belt. This time Whitaker took revenge, winning a near-shutout 12-round decision.

“[Whitaker] won the second fight,” Ramirez acknowledged. “He improved in the rematch.”

Ramirez fought once more, stepping up to junior welterweight to face Juan Martin Coggi for the WBA title, but he dropped a 12-round unanimous decision.

“I felt tired and a little sad because my manager died [in a swimming accident], so I decided to retire.” said Ramirez 102-9 (82 knockouts). Ramirez, now 61, is divorced. He lives in Huatabampo and has four daughters and one son.

“I have a very calm life,” said the ex-champion. “I go to Culiacan once or twice a year to see my daughters.”

Ramirez graciously took time to speak to The Ring about the best he fought in 10 key categories.

BEST JAB
Pernell Whitaker: He is a very fast fighter and a very good one. He had a very fast jab and he is a southpaw too.

BEST DEFENSE
Whitaker: He is very hard to hit; he used his body to avoid getting hit.

FASTEST HANDS
Whitaker: I fought two times with him and he had very quick hands. Camacho was fast too but not like Whitaker.

BEST FOOTWORK
Hector Camacho: His style; he had foot movement and he was hard to fight.

SMARTEST
Whitaker: He was very intelligent and he could resolve any problem in the ring. Chavez and Arguello were very intelligent. They were top quality fighters in that time.

BEST CHIN
Arguello: A lot of my rivals had a good chin: Chavez, Arguello and Mancini. I dropped Arguello in the fight but he got up very quickly and I didn’t feel I hurt him.

BIGGEST PUNCHER
Ruben Olivares: He was the only fighter who knocked me out in 111 fights. Rosario was a very good puncher too. Chavez was a good puncher but not above other opponents.

BEST OVERALL
Olivares: He was very smart and hit very hard. He was one of the best boxers in the world because of the championships he won. I fought very good fighters with different styles. Whitaker, Chavez, Arguello, Camacho were top fighters; they were the best in the world at that time, and they were all complete fighters.

Diego Soto helped co-ordinate and translate this feature. The Ring appreciated his assistance.

YOU MAY HAVE MISSED:

The post Best I Faced: Jose Luis Ramirez appeared first on The Ring.