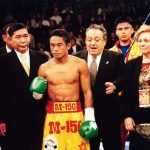 Former Muay Thai star Veeraphol Sahaprom successfully switched to boxing, where he twice held portions of the bantamweight title in the 1990s to the 2000s. His second title reign was particularly memorable, making 14 successful defenses of his WBC belt. Only Orlando Canizales (16) and Manuel Ortiz (15) made more defenses of their 118-pound titles and only Canizales’ championship tenure lasted longer.

Sahaprom was born in Nakhon Ratchasima, Thailand, the second oldest of four children on November 16, 1968. His birth name is Teerapol Samranklang.

When Sahaprom was still young, his family moved to over 150 kilometers (nearly 100 miles) west to Saraburi. His father worked as a truck driver while his mother ran a small food stall. Sahaprom began work at an early age to help his poor family.

“When I was young, about 12 years old, I worked at a small booth on the roadside that repaired punctured tires,” Sahaprom told The Ring through Chonlathan Supphaiboonlerd.

“Trucks were my most common customers. I went to school in the morning and worked at the shop in the evening and slept over at the shop. We charged 30 THB ($1 USD) per hole. Sometimes I even intentionally punctured some more holes on the tires to make some more money.”

He began his Muay Thai career at a similar time. “I saw that people went to fight at a festival at the local temple,” he said. “Many kids were there. They measured everyone’s weight and wrote our weight on our wrist. They then put all of us together and started matching. They asked if I was willing to fight my opponent. That was my debut.

“At first, I trained at home. I didn’t even join a gym. When I started to join the contests in Bangkok, I till trained in Saraburi but around 15 days prior to the fight, my promoter would send a sparring partner to Saraburi.”

At the peak of his Muay Thai career, Sahaprom won the highly prestigious Lumpini and Rachadamnoen Championships at junior flyweight, flyweight and junior bantamweight. He earned purses of 200,000 THB ($6,500 USD) per fight.

All the top Muay Thai fighters in his weight categories had fought each other and fans became tired of the same match-ups, so Sahaprom’s promoter decided to make the switch to professional boxing and signed him with Nakornluang Promotion (NKL).

He trained for three months focusing on boxing prior to his debut, a third round knockout of Joel Junio, in December 1994.

Sahaprom won two more fights and after just nine months as a professional, he met his vastly more experienced countryman Daorung Chuwatana for the WBA 118-pound strap. The two fought on close-to-even terms over the 12 rounds with Sahaprom edging matters on a split decision.

In his first defense, Sahaprom was dethroned in a shootout against tough mandatory challenger Nana Yaw Konadu.

“I knocked him down in the first round, then I became overconfident,” he said. “When the second round started, I walked right back to him, very determined to knock him out. To my surprise, Konadu came back very strong and knocked me down. The referee stopped the fight in the second round and I lost by TKO.”

Many doubted Sahaprom after the loss. His mentor Mr. Surachart asked him if he wanted to continue. Sahaprom was determined to rebound. He honed his boxing skills by staying very active, winning 16 consecutive fights in under three years. He then received a surprise WBC title shot in December 1998.

“Sirimongkol Singwancha lost against Joichiro Tatsuyoshi, as he defended his world title in Japan,” explained Sahaprom. “His promoter had an option agreement with the Japanese promoter, so I was sent to Japan to reclaim the belt.”

It was an opportunity the Thai fighter wasn’t about to let bypass him and he stopped the popular Japanese fighter in six rounds. In April 2005, Sahaprom, 36, took his title to Tokyo to face Hozumi Hasegawa. The Thai was showing signs of slowing down and was lost his title by hard-fought split decision.

Sahaprom decided to make another title run and after a handful of wins, met Hasegawa a year later and was stopped in nine rounds.

He continued to fight and met Vusi Malinga in a title eliminator in June 2008 and was stopped in four rounds. He retired with a record of (66-4-2, 46 KOs).

Sahaprom, now 51, is married and has two children. He lives in the Chaiyaphum province, where he owns and runs a restaurant called “Ban Champ Lok” (“World Champion’s Home”).

“I became well-known because of boxing,” he said proudly. “If there was no boxing, there would be no Veeraphol today.

Ricardo Barajas: [He] had firm, clean jabs. All the Mexican boxers have very good boxing skills.

Sergio Perez: Very good defense. Perez kept switching stance back and forth, which made it very difficult for me to land clean punches on him. I anticipated southpaw but he switched to orthodox in the second round. Then switched again in the third round.

Adan Vargas: Vargas threw rapid punches. All the Mexicans that I fought in mandatory fights were very good.

Toshiaki Nishioka: [Nishioka] was very fast; it was very difficult to catch him, to be honest.

Barajas: Barajas was the smartest; I think. It’s good that I knocked him out first, otherwise I might have had a very difficult time, Even when compared with Nishioka or Hasegawa. He threw very nice combinations. I won only because I was lucky that I had the opportunity to land a clean uppercut on his chin which he didn’t take well. Later on, I saw a window to throw a right cross and I grabbed it right away. That was how the fight ended. Had I not landed that uppercut on his chin, I would have had a very difficult time; I think.

Hasegawa: As I said [he had] abundant durability. He could also take a lot.

Barajas: All Mexicans were very skillful in my opinion. Ricardo Barajas, however, fought most beautifully. I really think Barajas was the best, skillwise. He had a beautiful Mexican boxing style.

Vargas: I still remember the fight vividly. He stood 173 cm (5-foot-8) tall [Veerapol is 162 cm/ 5-foot-4). Great physique. He gave me a very hard time. Vargas was the best I faced. I took a lot during the first six rounds. The fact that he was a southpaw made it extra difficult for me. I won by a wide unanimous decision because he ran out of gas by the sixth round. He gave me very difficult six rounds though.

Chonlathan Supphaiboonlerd helped co-ordinate and translate this feature. The Ring appreciates his assistance.

The post Best I Faced: Veeraphol Sahaprom appeared first on The Ring.