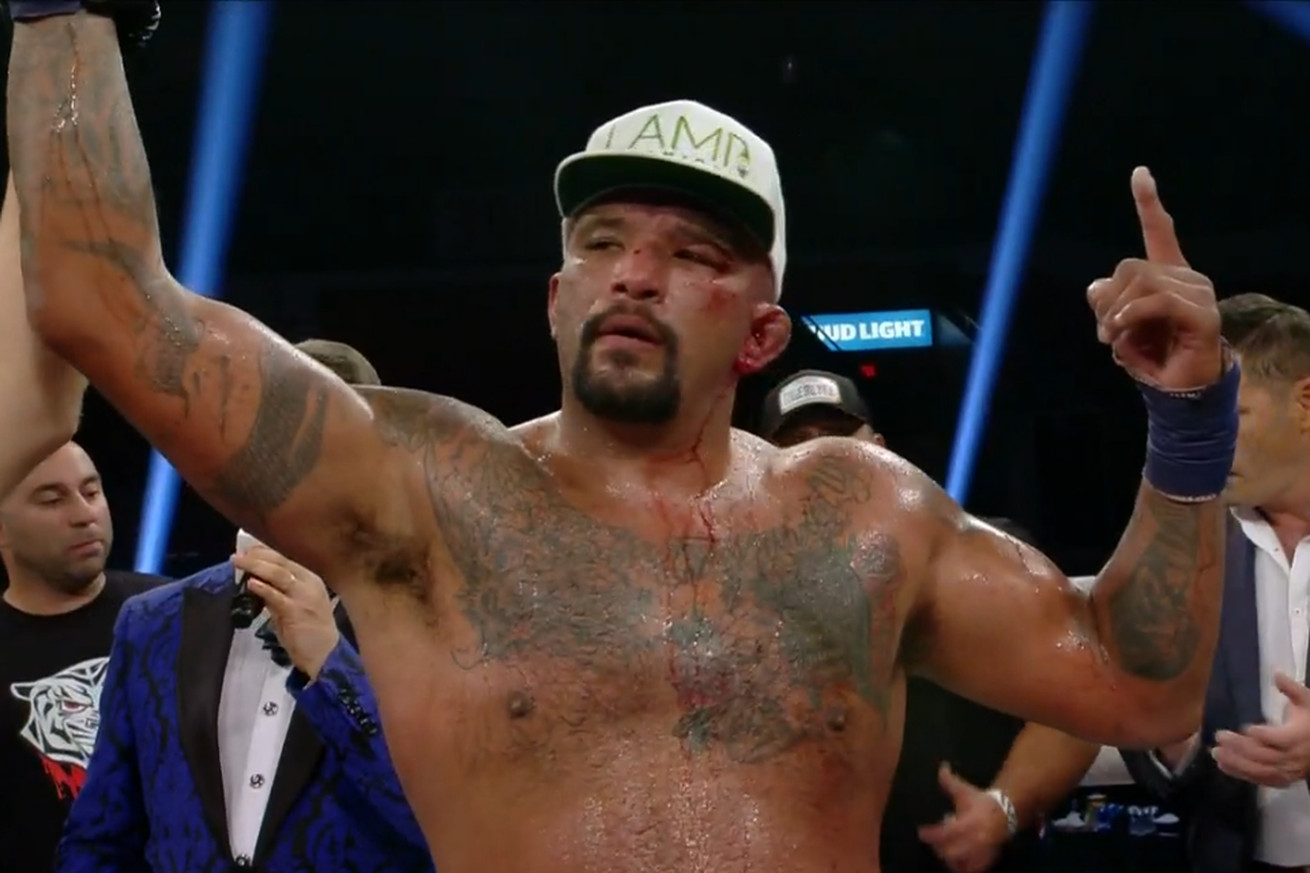 Joey Beltran became the first man to successfully defend the BKFC heavyweight title, knocking out Marcel Stamps in the fourth round of their BKFC 13 main event tonight in Kansas.

Beltran, 38, is now 4-1-1 (3 KO) in bare knuckle, and had to dig down to get this one. Stamps, a 35-year-old former University of Alabama linebacker, had advantages in reach and athleticism, and he showed that off in the first couple of rounds especially.

But Beltran, who is also 18-15 in MMA and has fought in both UFC and Bellator, was just relentless and fearless, and he started finding Stamps some in the third round. The open scoring in Kansas revealed that Stamps was up 29-28, 30-27, and 30-27 after three, but the tide was turning, and Beltran knew it.

The fourth round was a bit of a mess. Beltran was connecting with shots, and then Stamps went down to the canvas claiming he was hit in the back of the head or neck, which replays didn’t seem to show. Once action resumed, Beltran jumped on him and dropped him, and Stamps took quite a while to tell the referee he actually wanted to keep going; he was obviously out of fuel at that point, and kept falling over out of fatigue, the drops ruled slips by the referee. But Beltran put him down again, and that time Stamps took the full 10-count.

Asked what he wants to do next, Beltran said he’d like a rematch with Arnold Adams, who stopped Beltran in a 2018 bare knuckle fight.

“There’s a few guys that pop up in my mind, but I’lls ay it now, and I’ve said it since I won the title, but there’s only one I wanna fight, and that’s my man Arnold Adams,” he said. “Out of respect, and out of my own ego that there’s a man walking around that thinks he whipped my ass. I want my get-back.”

This was the bare knuckle debut for Kansas’ Hernandez, who won a bronze medal for Team USA at the 2016 Olympics in Rio, but whose pro career has been frankly stuck in his home state and gone nowhere since it began in 2017. But he’s 7-0 (4 KO) in pro boxing, and he definitely has skills, which he showed off here.

Wilson, who is 1-4 in MMA, has absolutely nothing to be ashamed of here. He hung in for four rounds with an Olympic bronze medal boxer without getting dropped, and though he was obviously out-classed in boxing skill, he was very game and tried his absolute best. The fight was stopped after the fourth round when Wilson vomited in his corner between rounds, and in the unified rules of MMA — which BKFC follows, other than the obvious rule differences of the actual fighting — that’s an automatic fight-ender.

“I didn’t take him lightly. I just went in there and boxed smart, and came out with the easy win. My face looks pretty good, so I can’t complain,” Hernandez said after the fight. “He was too slow for me and my boxing is too good. We had a little bit of back-and-forth trash talk.”

The two did have a good deal of talking going on, but when it was over, as you can see above, Wilson lifted Hernandez and the two were pleasant enough.

The 24-year-old Hernandez hadn’t had an organized fight since Feb. 2019, when he beat a club fighter in Mulvane, Kan., and he’s said recently he does plan to keep going in pro boxing. He also says he’s a free agent, and in all seriousness, a major promoter should really try to pick him up. He’s not only a good fighter with the obvious amateur pedigree, but he had a fun style even in the amateurs. Flyweight isn’t the biggest division in the U.S., obviously, but it can be done. Not everyone has to headline T-Mobile Arena or MSG to have a good career for a top promoter.

Asked what his bare knuckle plans going forward might be, Hernandez was somewhat non-committal, but he did say he plans to return.

“I really liked this, so we’ll see what (promoter Dave Feldman) talks about for the next fight. But I do plan on coming back and taking over. We’ll see what happens next and kind of play it by ear.”

In what was called the night’s “featured bout,” MMA veteran Dave Rickels made his bare knuckle debut against fellow MMA veteran Clifford Wright, dominating the fight but never dropping Wright, who showed a great, learned ability to survive, which he had to utilize in every round.

Scores here were 50-45 on two cards and 50-43 on the third, with Rickels, 31, getting a pair of 10-8 rounds on the latter card, which is fair enough, there were a couple he really dominated. Rickels is tied for most fights in Bellator history at 23, and is 21-6 overall in MMA, he’s had a good MMA career, really solid. Wright is 12-13 in MMA and also fought in Bellator from 2012-14; not on Rickels’ level there, not on Rickels’ level here, but what a tough dude, he took some good shots and held up thanks to a good chin and a lot of savvy.

Rickels is young enough that he really should have some good future in BKFC if he sticks here, which it looks like he will. He could wind up being a pioneering standout, so to speak.

The next big BKFC event will be BKFC 14 on Friday, Nov. 13, featuring title fights at 135 (Johnny Bedford vs Dat Nguyen) and 155 (Luis Palomino vs Joe Alers), both of which could be loads of fun.