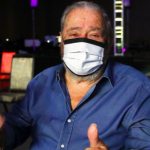 Politics commanded the attention of maybe a hundred million Americans last night, with the faceoff for the premier leadership slot in the nation up for grabs.

The New York product Donald Trump looked to secure another four years in office, as the veteran political player Joe Biden, out of Pennsylvania, threw his hat in the ring to unseat President Trump.

The atmosphere for the clash took a wicked turn when COVID started making rounds in America, and the death toll rose, and then didn’t abate as citizens hoped and expected would happen in a nation that likes to play up its exceptional nature.

And smart money weighed in, as the months passed, and the curve of cases didn’t flatten out as most epidemiologists predicted it could, with a properly cohesive national plan of attack to mitigate the virus’ carnage.

Boxing lifer Bob Arum, widely assumed in many quarters to be greatest promoter the sport has ever known, went on record with his belief that Tuesday, Nov. 2 would play out as the night when the divided country decided en masse to demand change. Not four, but zero more years, they’d decide, ushering in a so-called “blue wave” of Democratic rule. Trump and “Trumpism” would be repudiated, he thought.

And then results started coming in, and it was clear, the wave would not come crashing down on the divisive spray tanned man who announced his candidacy by taking aim at Mexico and Mexicans, which didn’t win him the popular vote but also didn’t keep him from beating Hillary Clinton in the electoral college run-off.

So, how did The Bobfather spend election night? “I went to bed,” said Arum told RING on Wednesday at 6 PM Nevada time, when it became clear that not enough states would show results to offer a decision. “But I couldn’t sleep. So I put on the TV, and it said that Biden had gone ahead in Wisconsin, and I relaxed.”

Yes, he did take in this historic complain session from Trump, and he snorted in derision when recalling the display. (“We were winning everything, and all of a sudden, it was just called off,” Trump said, nonsensically.) “Then, I heard about Arizona. And (ex Senate majority leader and Nevada resident) Harry Reid told me this morning that he thinks Democrats are OK, and where the votes are coming from.”

So, the hardcore Dem exhaled a good bit.

But, to be sure, that didn’t stop the gears shifting and spinning hard in his head. “I cannot believe that so many fellow Americans voted for this guy,” Arum said. “And what is the message? That I ought to be very disappointed in so many of my fellow Americans.  I thought normal people with a brain and some intelligence wouldn’t fall (again) for this con artist. Also, it tells me that almost half of my fellow Americans out there are drinking this guys’ Kool-Aid.”

Arum is 88, and sometimes takes the politics as or more seriously than his boxing empire. He’s seen enough of the rodeos to know where the mud splatters came from, OK? Not so much this time. “I don’t know. You remember the musical, “The Music Man?” It’s about a man, a con artist who sells it. Trump is the epitome of a con, to me. He is very, very good at that.”

Today, Arum spent ample time trying to decipher why the wave didn’t curl and crash. We talked about how Dems responded to the Obama win in 2012, how there were so many takes from pundits about how demograph shifts and trends equal destiny, and a diminishing Republican party going the way of the T Rex. Well, Rex, in the form of Trump, has been stomping like a prime Godzilla, and Arum admits to being heavily puzzled how and why the electorate didn’t take in his act, and give him some of that “The Apprentice” medicine.

Feels like Dems got cocky, thinking demography would set their table for the next few decades, yes? “They sure did,” he said.

And for any pundits thinking that “Trumpism” will recede if we learn that Biden gets his hand raised in the extra innings as ballots get counted, Arum has a warning. “That is the most dangerous thing to come down, they could get someone equally as good a con artist but with brains. We better watch out. Someone comparable to him but smarter than him.” I tend to give Trump “high marks” for his “ability” to understand human nature, and exploit that, to his advantage. I told Arum, I see him as being a once-in-50-years type of talent in that regard. No, Arum said, the bullpen might well be stocked with another ace. “As a good a con man will appear.”

But of course, I touched on some boxing. Because you know my stance, that who is entrusted with political leadership positions does indeed affect all boxing fans and fighters, to some extent, even if they feel it’s not pertinent. So that’s why I believe this subject is fair game in a column for this website. Now as much as in any time in decades, it matters, arguably, because we all need to care how the pandemic is handled, and to question whether America sees itself as a “melting pot” country anymore. That deserves heavy coverage, because politics and the decisions made by elected leaders are not seperate from the sports arena.

By Wednesday night, 104,000 plus new infections were recorded that day, The Washington Post reported, with 17 states confirming record COVID hospitalizations.

Pivoting to the fight game, then. Arum and Top Rank have a Terence Crawford v Kell Brook main event unfolding on Nov. 14 from Las Vegas and the MGM Bubble. And what are the stakes there, Crawford laying claim to No. 1 pound for pound status, or what?

“I don’t know,” Arum said. “Crawford is Crawford. It’s a decent fight, Brook will give him a good fight. That’s my job and what I do and bring to ESPN.”

OK, now to year end, what is Arum really amped for, in the boxing sphere? “I love ‘The Monster’ Inoue,” the promoter replied, “that’s my favorite!” Naoya Inoue stopped Jason Moloney on Oct. 31, 2020 at the MGM Bubble on a Top Rank/ESPN production.

I pivoted back to politics, then. I told Arum I wanted to shoot the shit with rival Don King, and called him the day before the election, after I saw the press release message sent out by Don King Promotions. Maybe you missed it?

“Vote for President Trump and freedom, liberty, equality and justice for we the people, vs gloom, doom and darkness with Joe Biden and the crooked, corrupt, rigged, sexist, racist system,” the letter read. “Hypocrisy is the system. The system is hypocrisy. Joe Biden is the hypocrisy of the corrupt, rigged system. The hypocrisy of the corrupt, rigged system is Joe Biden. Joe Biden hypocrisy, corrupt, rigged system are one and the same, darkness and despair. Vote Trump to get rid of the corrupt, rigged system. A man who is fearless, a man who could not be bought, bribed, intimidated or coerced, a man who is brave, courageous and bold. President Donald J. Trump, our spiritually touched, god-sent leader of faith and hope. Vote Trump, we the people must vote, especially the left outs, the white woman and the African Americans/People of Color, must vote Trump, vote Trump, vote Trump. This is the most important election of our lifetime. Please my fellow Americans, we must never forget that God is in the plan. Donald J. Trump would never have become the 45th President of the United States of America, without God’s intervention. God works in mysterious ways his wonders to be performed. Promises made… Promises kept. Every promise from building the wall, producing jobs, jobs, jobs, bringing industry back to America, better trade deals, to peace in the Middle East was kept by President Trump. Only in America,” the dictation from King finished, capped by his signature.

King, who turned 89 on August 20, picked up when I called, and he said to call back, because he was “indisposed.” Perhaps I will when when the winner in the Biden v Trump clash has his hand raised. The two OGs, in 2017. King is not by his lonesome in the boxing space, there are tons of “conservative” folks who pulled the lever for Trump on Tuesday. (Photo by Mikey Williams for Top Rank)

Back to Arum; I pushed a bit harder, seeking insights and answers, because on Wednesday, all day, I was fixated on the blue wave that didn’t come Tuesday.

Even when I wasn’t thinking that there’d be a massive shift in voter behavior, I did think that, OK, either Senate bossman Mitch McConnell or Kentucky’s Senate fixture Lindsey Graham would be ousted. Didn’t happen.

“I thought it was a cinch there would be a blue wave,” Arum said. “It wasn’t about the candidates. There’s something about the psyche of Americans that people living on either coast can’t figure out. It will take someone smarter than me to figure it out. I don’t understand it anymore.”

NOTE: I don’t claim to be free of emotion when writing this column, and wouldn’t be so bold or demented to tell you I believe Trump isn’t a warped and sad soul. I’ve communicated this stance to him, on Twitter, and in 2015 he reacted. The post Bob Arum very disappointed in election popularity of Trump appeared first on The Ring.