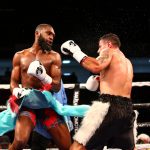 The COVID-19 pandemic has hit many people in many different ways. It apparently hasn’t affected Jaron “Boots” Ennis much. The rising 23-year-old Philadelphia welterweight kept himself on point with his weight and his training during the sports shutdown.

Ennis gets to test where he is this Saturday, when he takes on Juan Carlos Abreu in a scheduled 10-round welterweight bout on Showtime’s Showtime Boxing: Special Edition (9 PM ET/6PM PT) from the Mohegan Sun Casino, in Uncasville, CT.

During the early months of the pandemic, Ennis occupied his time by playing basketball, running and going to the gym.

His weight is good. His attitude is strong.

This was supposed to be a big year for Ennis. It’s been pushed back and altered by the pandemic.

“No, not really,” he said. “I wanted to fight three or four times this year, but the way I look at it, I’m still fighting. I get one more in with this fight and we’ll see where the rest of this year goes.

“If the COVID-19 didn’t happen, I think I would have gotten a (title shot) by the end of the year. I think 2021 will definitely be the year I get my chance.”

Ennis admits he doesn’t know much about Abreu, other than he’s never been stopped.

“I won’t look for the knockout, I’m just going out there and be smart,” said Ennis, who has never gone beyond six rounds. “I’m not worried about him at all. I’ll pick him apart as soon as the bell rings.

“I’ve been working on my patience. I feel I’m smarter, stronger, overall better. I do want to be the first one to stop Abreu. I would like to get one more fight in before the end of the year.”

Bozy Ennis, Boots’ father and trainer, says his son has focused on his jab during the pandemic time, and when Boots isn’t preparing for a fight, he was helping other fighters prepare.

“Before this pandemic, it was hard enough trying to get sparring for Boots, and now since it hit, it became even harder,” Bozy said. “It’s tough to prepare when you don’t get the right type of sparring. But we’ve been working out way around it.

“We know Abreu. He came to our gym one time and we sparred him when Boots was 17. He handled him easy then. Abreu is a good fighter, though. He’s fought a lot of top guys and has never been stopped.”

Abreu has been in with Egidijus Kavaliauskas, Alexander Besputin, Jamal James and Humberto Soto and went the distance with all of them. He’s 3-4-1 against undefeated fighters.

Team Ennis feels Boots is ready for any of the name welterweights today, but they also know the reality of their dilemma: Boots is a high-risk, low-reward fight. So, if they can’t face Shawn Porter, Terence Crawford, Errol Spence Jr. or Danny Garcia, they can fight their opponents.

“We want to fight all of the guys who went the distance with them, and create a trail,” Bozy said. “We want to come right behind them.

“Why would we go with Chris Middendorf when Top Rank, Al Haymon, those guys all still wanted Boots? Why go with someone who really isn’t a promoter? Why would we sign with someone like that?

“We have a great deal with Showtime. We can go with any promoter we want. Everyone is happy with that. Write that down.”

The post Boots Ennis can’t wait to get back into the ring Saturday night on Showtime appeared first on The Ring.