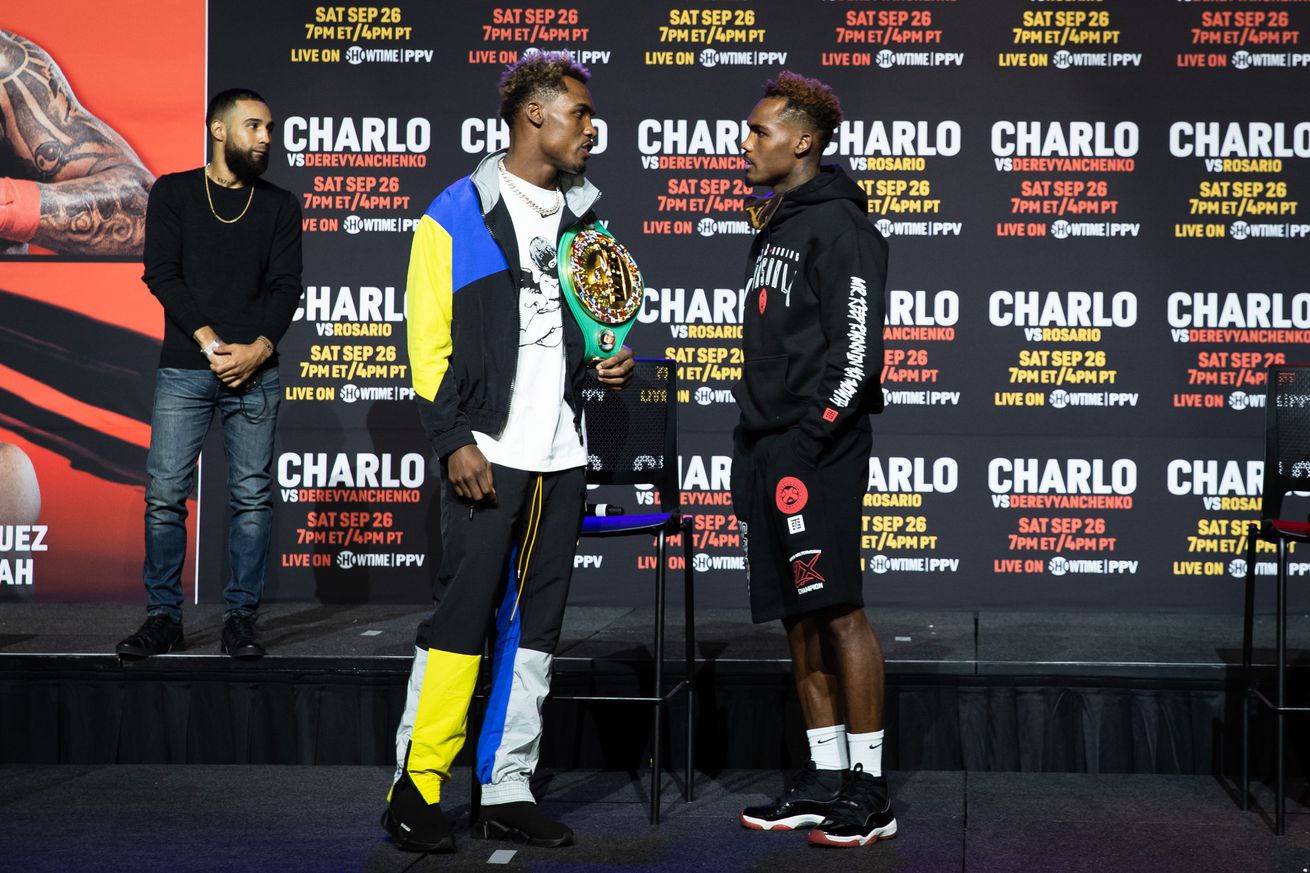 We’re just two days away from a big Showtime PPV fight night, where the Charlo twins, Jermell and Jermall, will each be in a co-main event bout, facing Jeison Rosario and Sergiy Derevyanchenko, respectively.

Jermall will be defending his WBC middleweight title against Derevyanchenko, while Jermell and Rosario will unify three belts — WBC, WBA, and IBF — at 154 pounds. There will be four more bouts on the PPV broadcast, a six-fight show all in all, and we’ll have full live coverage on Saturday, Sept. 26, starting at 7:00 pm ET.

Errol Spence Jr: I like Rosario as a fighter, but I think Jermell is going to beat him. Rosario has been stopped before. He has been hurt before and recently Jermell’s been showing knockout power. I feel like if he catches Rosario with a good shot, he could stop him, but I’m going with Charlo by decision. Charlo W-12

Shawn Porter: I think that Jermell Charlo is going to win this fight against Jeison Rosario. Rosario is on a winning streak, but Charlo has a mean streak, and that energetic persona works for him. Knowing that Rosario has been knocked out before, and when you’re going up against a heavy-hitter who lands straight punches and a nice jab like Charlo, I have to go with Charlo by late-round stoppage in a firefight. Charlo late TKO

Anthony Dirrell: Anything can happen, and we know that. Jeison Rosario’s mentality in knocking out Julian Williams was unbelievable. But Rosario’s not a guy who dances around too much so Jermell’s skills and his beast mentality will get him those belts from Rosario. I believe it will be Jermell by a split-decision. Charlo SD-12

Marcus Browne: Jermell Charlo is on a roll, but Jeison Rosario is a very tough cookie. Jermell has a lot of momentum coming off of his revenge victory over Tony Harrison, and, for that reason, I believe that he is in a zone. Rosario did stop Julian Williams on a night when he brought his “A-game,” and I believe that he can present some issues. But I see a late-round knockout for Jermell. Charlo KO-12

Herman Caicedo: Jeison Rosario is sharper and more powerful with his punches and shows a level of calmness beyond his years. I believe he will defeat Jermell Charlo and maybe even earn a late stoppage. Rosario W-12

Chris Colbert: I believe that Jermell Charlo versus Jeison Rosario will be a tough fight for the first three or four rounds, but that Jermell’s clean power-punching will be too much and Rosario will get caught with a vicious shot and be knocked out cold. Charlo KO-10

Nonito Donaire: Jermell Charlo is in against one hell of a fighter in Jeison Rosario, who is big and tough and will make it a dogfight. But I think that over the distance, Jermell will start to catch up to him and win by eighth-round knockout. Charlo KO-8

Luis Ortiz: I think that Jeison Rosario will win this fight against Jermell Charlo. Rosario is bigger, stronger, has better punch placement and lands with harder shots. I believe that he will win a decision, if not by early knockout or TKO. It’s a life-changing event and Rosario won’t waste this opportunity. Rosario W-12

Tony Harrison: As much as I don’t like Jermell Charlo, he gained my respect in our two fights. Charlo’s facing a guy in Jeison Rosario who is game and very motivated after knocking out Julian Williams. I think it’s going to be a tight fight, and I think each of them can be hurt at one point, but I see Charlo winning by a unanimous decision. Charlo UD-12

Jorge Cota: I know both Jeison Rosario and Jermell Charlo because I fought both of them, losing a split-decision to Rosario and being knocked out in third round by Charlo by a punch that I didn’t see coming. But even though my fight went the distance against Rosario, I felt the power of every single punch he threw, whether it was on the arms, the shoulders, the chest, the stomach or the head. I never really felt Charlo’s power until he caught me with that one punch. So with that in mind, I believe that Rosario will do similar damage to Charlo, wearing him down before finally stopping him in around the 10th round. Rosario KO-10

Erislandy Lara: Jermell Charlo will be too much for Jeison Rosario because he is the better boxer. The fight will be competitive until the later rounds, when Jermell will score a knockout. I don’t see this fight going the distance. Jermell by 11th round knockout. Charlo KO-11

Sebastian Fundora: I believe that styles make fights, and that their styles are perfect for one of them to be knocked out. But I think that Jeison Rosario has the edge over Jermell Charlo, and that it will be Rosario who delivers the knockout in the later rounds. Rosario late KO

Andre Dirrell: I believe that Jermell Charlo will come out of this with a knockout victory over Jeison Rosario, who will bring it, but Jermell will have all the answers and make the adjustment. I’m looking for Jermell to win by ninth or 10th round-knockout. Charlo KO-10

Daniel Roman: Jermell Charlo versus Jeison Rosario is going to be a war that I don’t think will go the full 12 rounds. I believe that Rosario will win by 10th-round knockout. Rosario KO-10

Stephen Edwards: Jermell Charlo versus Jeison “Banana” Rosario is a tough fight to assess. I think Rosario is the better boxer. Jermell looks like the better boxer because he can use his legs and he has a good jab. But Jermell’s not hard to hit and he’s been out-boxed for long stretches by Tony Harrison, John Jackson and Demetrius Hopkins. Rosario has some skillful moves – except he just comes forward. But Jermell is clutch and he has an elite chin also. I also believe Rosario loses steam after six rounds. So, look for Jermell to clip him late in a great fight. Jermell by TKO. Charlo TKO-6

Kenny Porter: I think Jermell Charlo will win this fight by stoppage against Jeison Rosario, and I’m thinking that it will be a knockout in the ninth or 10th round. Charlo KO-10

Javier Fortuna: I have no doubt that Jeison “Banana” Rosario will defeat Jermell Charlo and make history for the Dominican Republic. I believe that Rosario will do to Charlo what he did to Julian Williams, but that Charlo will be knocked out cold. Rosario KO-7

Kevin Cunningham: Somebody is getting knocked out in the Jermell Charlo versus Jeison Rosario fight, and I’m picking Charlo to win a shootout. I believe that Charlo’s athleticism will give him the edge over Rosario, and I think he’ll stop Rosario in the eighth round. Charlo KO-8

Juan Carlos Payano: I believe that Jeison Rosario is going to win against Jermell Charlo. It’s Jeison’s time, and he won’t waste it. Jeison is bigger and stronger and will walk down Charlo. Rosario W-12

Rolando Romero: Jermell Charlo versus Jeison Rosario is going to be a dogfight over the first half of the fight, but I think that as it goes on, Jermell’s just going to crack him. I think it will be a late-round knockout, probably in the eighth or the ninth. Charlo KO-9

Michel Rivera: Jeison Rosario is my pick against Jermell Charlo. From the heart and from the head, Rosario is better at power punching and very poised in all situations. Rosario by decision or by early knockout. Rosario W-12

Jesus Ramos: I see Jermell Charlo boxing a little smarter than Jeison Rosario and taking him into deep waters with his experience. It’s a been there done that situation for him. Charlo TKO-10

Amilcar Vidal: I believe that Jeison Rosario against Jermell Charlo will be a very entertaining fight, but it’s also the biggest of Rosario’s career. For that reason, I believe that Rosario will be at his best and win by knockout in the later round, perhaps by 10th-round TKO. Rosario TKO-10

Andre Rozier: This is a very intriguing bout. Jeison Rosario is a big 154-pounder, as is Jermell Charlo. They both have good punching power. But It will come down to a battle of wills, and I’m seeing the hunger of Jeison being a stronger force. Jeison by decision. Rosario W-12

Carlos Negron: Jermell Charlo is very skilled, but Jeison Rosario is the harder, sharper puncher. As long as Rosario doesn’t get surprised with a shot, he will win by knockout in the later rounds. Rosario KO-10

Charles Mooney: If Jermell Charlo’s mind isn’t right, he can leave a lot of openings for Jeison Rosario to capitalize on and walk away with the championships. Rosario’s a tough guy, so I’m leaning toward him to win a tough, close fight by split-decision. Rosario SD-12

Caleb Truax: I think that Jeison Rosario may give Jermell Charlo some problems early due to the fact that he’s a big 154-pounder with good power, but I think that Jermell’s general experience, punching power, accuracy and ability to come on in the later rounds will enable him to stop Rosario in the eighth or ninth round. Charlo KO-9

Eduardo Ramirez: Jeison Rosario is a younger, newer champion and more motivated fighter than Jermell Charlo. I have no doubt that he is the stronger more powerful fighter and that he will win by a late-round knockout. Rosario KO-9