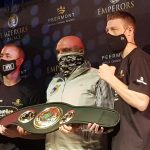 South African boxing is finally back, with a card entitled “Back4Battle” being staged by Golden Gloves Promotions at Emperor’s Palace, Gauteng on Saturday night.

The “Bubble” or “Fight Camp” format, popularized in the U.S. and U.K., was followed with strict testing and isolation of all participants, officials and skeleton staff in a special section of the casino and hotel venue. Although no live crowd is allowed, starved South African fight fans will no doubt be glued to their couches on Saturday night to view five evenly matched bouts.

Topping the bill will be the long awaited 4@War junior middleweight tournament final between Boyd Allen and Brandon Thysse over 10 rounds. The fight will be a rematch of their 2019 encounter that was won by Allen who eked out a split decision.

Will things be different this time around? It is an open question. Both fighters seem to have improved.

Allen has been moved fast against more experienced fighters to reach this point in his career with only six pro boxing bouts under his belt. It was a more settled Boyd Allen that stopped Tristan Truter in the 10th round in the semi-final in November 2019. A former EFC featherweight champion, Africa’s premier MMA promotion, he settled into a more orthodox boxing posture as opposed to his previous switch-hitting style. Is it a new style for him or was it just the strategy for the night? It seems it’s neither here nor there and part of a process. “I joined a new camp with (trainer) Peter Smith and he has been working with my skill set and my mind set, knowing that I come from an MMA background. He has been very patient. We are trying to add more and more tools to my boxing dynamic.”

The soft-spoken Allen projects the image of a Zen-like warrior and is not one for trash talking. Pressed for a prediction, he simply states: “My hand will be raised on Saturday night.”

If Allen looked like a different fighter, the 12-2-1 Brandon Thysse had his coming out party when he stopped the undefeated Roarke Knapp in seven rounds in the other semi-final. He got off to an uncharacteristically quick start, using his rangy jab. He weathered a mid-round storm and finally stopped Knapp, courtesy of a series of uppercuts set up by a body shot.

Thysse is brimming with confidence going into his second encounter with Allen. “I’ve shown people what I can really do if I set my mind to it. That was one of my favorite fights. My training camp was the hardest I’ve had until this one. Knowing I was the underdog for that fight motivated me even more and I still think of myself as the underdog going into the final.”

He minces no words when asked about the outcome. “I’m knocking him out, definitely. One hundred percent.” In the main supporting bout, undefeated Jabulani Makhense takes on the experienced 22-3-2 Erik Kapia from the Democratic Republic of the Congo in a 10-round welterweight bout.

Makhense had a decorated amateur career, culminating in a bronze medal at the Commonwealth Games but his fight started even before he could lace up the gloves. “I started when I was very young, I think I was nine. I always had trouble because of my mom. She didn’t want me to box, but in the end she gave me permission and here we are,” he says with a smile.

Makhense, currently 9-0, has been moved through the ranks fast, and 2019 was his breakout year when he took on the former South African champion, Xolani Mcotheli, durable Michael Mokoena, and fellow undefeated Marios Matamba. “Those were really tough fights, but I enjoyed it. It put me where I am now.”

Kapia, who has been based in South Africa since 2016, is a durable fighter who has only been stopped once by hard-hitting Thulani Mbenge. Is scoring a stoppage on Makhense’s mind? “All I can say is anything is possible. Come fight night, we’ll see what happens.”

How does his mother feel about him boxing these days? “She is my biggest fan,” he laughs.

Kapia, for his part, is aware that he is the underdog in this bout but seems determined to spring an upset, inspired by his three-month-old baby daughter. “You know, I told my daughter before I came here, ‘Baby, I’m going, I’m going to make it, I am going to bring it (a regional belt) home for you.’”

The losers of the junior middleweight tournament semi-finals, 9-1-1 Roarke Knapp and 8-2 Tristan Truter will be looking to get back in the win column when they take on each other for the tournament third place over 10 rounds. This should be an action-packed affair with Knapp’s explosive inside combinations up against the speed and movement of Tristan Truter who also packs a respectable punch.

Both are seeking to learn from their mistakes. Knapp has cut out all distractions, using the lockdown to re-dedicate himself to his training. Truter, for his part, took a step back to analyze the situation. “Let’s just say I have what I need to beat him. I’ve seen things that I need to work on, in myself as well. So I’m just going to give it my all and be a much better Tristan.”

In the second rematch on the card, two cruiserweight prospects, 7-1 Lebo Mashitoa and 6-1 Keaton Gomes, will go at it over 10 rounds. Mashitoa handed Gomes his first loss when he outboxed him over 10 rounds in September last year.

There is no love lost between the two and each is determined to succeed, whether it be repeat or revenge. “I’ve trained very hard, but mostly I’ve prepared my mind. I don’t care how hard he hits me or how fit he thinks he is. He can put me down on the canvass, I’ll get up and I’ll respond with force,” says Mashitoa. “Just watch. It is going to be exciting. I’m telling you now, I am going to stop him!” responds Gomes.

In an opening bout, 5-0 super middleweight, Cowin Ray, takes on 2-3 Karabo Mokupi in a six-rounder.