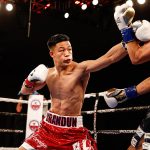 Highly regarded welterweight Brandun Lee will face Jimmy Williams in a scheduled eight-round contest at the Mohegan Sun Casino in Uncasville, Connecticut in a special edition of ShoBox on Wednesday.

Lee is excited at the prospect of facing the toughest opponent of his career to date.

“It’s going to be a good fight,” Lee (19-0, 17 knockouts) told The Ring. “I think it’s a huge step up in my career and I think it’s the right step up. Looking at my past fights, I need to step up to show the boxing world who I am. I believe I’m going to get respect from the boxing world.”

The 21-year-old Californian feels his key to victory is finding a way past his experienced rival’s premier weapon.

“He’s likes to throw his jab, he likes to use his reach,” explained Lee. “I’ve seen a few videos and every fight he throws at least 40, 50 jabs per round. I have to get past that jab or take away his left arm.

“He likes to throw little feints out once in a while to catch his opponents off guard. Other than that, I don’t really see anything special.”

Lee feels his own attributes gives him a decided edge.

“Most definitely my speed [will be decisive],” said Lee. “I feel like he punches in slow motion. My speed will be a big factor in this fight.”

The talented prospect headlined the most recent ShoBox card in March, impressively stopping Camilo Prieto in three rounds. However, he admits that fighting without a crowd was difficult, and he needed jockeying by his father, Bobby, who is also his trainer, to put his foot on the gas.

“Having no fans really played a part,” Lee admitted, before acknowledging that the experienced will benefit him ahead of this fight. “I felt if there were fans there, I would have went for the kill way sooner than I did.

“At the same time, my father and I had a game plan to take him to the later rounds, but then I came back at the end of the second round and my father was like, ‘Let’s change the game plan and go for it,’ so that’s what I did.”

Lee, who is majoring in Criminal Justice at the University of San Bernadino, is pleased to be back on ShoBox for the fifth time.

“This is world class boxing,” he said. “I’ve got to show the Showtime people that I’m ready for the next level.”

Manager turned promoter Cameron Dunkin is known for having an eye for talent and is predicting big things for his charge.

“Brandun is a terrific fighter,” said Dunkin. “He’s coming into his own now. He’s getting better with each fight. I think Brandun will be one of the figureheads of our company, Now Boxing Promotions, in the coming years.”

Williams turned professional in 2013. Since then the Connecticut resident has fought regionally with success, going undefeated in his first 15 fights before dropping an eight-round decision to Marquis Taylor. “Quiet Storm” has rebounded with two wins, although he lost a 10-round unanimous decision against Mark DeLuca and was stopped by Abel Ramos in four. Williams record stands at 16-3-2 (5 KOs).

The post Brandun Lee: Jimmy Williams punches in slow motion. My speed will be a big factor in this fight appeared first on The Ring.