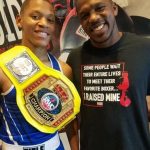 Brian Norman Jr. may only be 19 years of age, but he believes he has the ability of a savvy contender.

Norman has not faced the best opposition thus far, but he is confident he can achieve his goal of winning a world title belt and becoming the next superstar from Atlanta, Georgia.

Norman will square off against Flavio Rodriguez Friday night at the Grand Casino in Hinckley, Minnesota. The eight-round bout will precede the main event bout between junior welterweights Brandun Lee and Camilo Prieto. Both bouts will headline a ‘ShoBox’ telecast (Showtime, 10:00 p.m. ET/ 7 p.m. PT).

The hard-hitting prospect will square off against his toughest test to date in Rodriguez (9-1-1, 7 KOs), who is 10 years his senior. However, Norman believes he is ready to take the step up and vows that he will not be overwhelmed.

“I take every fight serious, but this fight is extra serious,” Norman told The Ring. “It’s my first televised fight. My first Showtime fight. I want to perform to my best because I want them (Showtime executives) to call me back so I could fight on a ‘ShoBox’ main event. That’s why I’m dialed in for Friday.”

“I haven’t seen any of Rodriguez’s fights. I’m sticking to my game plan. I’ll see how he will react to my speed in the ring.”

Norman, who made his pro debut at the age of 17, has mostly fought in Mexico, but two of his last four bouts have taken place in and around Atlanta. Not surprisingly, he has ambitions of headlining fight cards in his hometown in the future.

“I want to continue representing Atlanta,” Norman said. “My goal is to sell out the Mercedes Benz Stadium (home of the NFL’s Atlanta Falcons) and just keep representing Georgia as well.

Norman is the son of super middleweight gatekeeper Brian Norman Sr., who retired in 2011 with a record of 17-11 (5 KOs). He faced the likes of Jean Pascal, Henry Buchanan, Fernando Guerrero, Edwin Rodriguez, and Dominic Wade.

Aside from having his father by his side to educate him about the business of boxing, Norman is grateful that they have a strong relationship outside of the ring.

Norman is confident that 2020 will be a breakthrough year for him. He believes an impressive performance Friday night over Rodriguez will open more doors for him to become a legitimate prospect that boxing fans can follow.

“I’m thankful for [boxing manager] Cameron Dunkin helping me with the opportunity to fight on Showtime. He has seen me and knows the type of talent I possess. He’s helped me out so far with my career.

“My goal is to be the undisputed champion at 140 pounds. I won nationals as an amateur, but I feel like I’m in the background when people talk about talented young fighters in boxing. I’m going to do what I have to do to have boxing fans say, ‘That boy is a beast. I want to watch him fight again.’”

The post Brian Norman Jr.: ‘My goal is to be the undisputed champion at 140 pounds’ appeared first on The Ring.