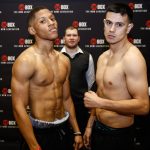 An exciting, back-and-forth affair came to an abrupt end in the chief support bout.

Brian Norman Jr. and Flavio Rodriguez went toe-to-toe for much of their slated eight-round fight, but an accidental head-butt opened up a laceration above Rodriguez’s right eye in the penultimate round.

Judge Tim Taggart Sr. scored the fight 69-64 and judges John Mariano and Patrick Morley had it 68-65, all in favor of Norman Jr., who remained undefeated with a seventh-round technical decision win.

It was easy pickings for Norman in the first round as he beat Rodriguez to the punch behind a solid jab and quick punches to the body.

The second round was a fun one as Norman and Rodriguez exchanged heavy punches. Norman cut off the ring effectively and backed up Rodriguez to the ropes and connected with a big right hand. Rodriguez then clinched and spun Norman to his left and landed his own right hand. Towards the end of the round, both men took it down a notch, and Norman dictated the pace from the outside behind his jab.

Rodriguez proved to be a handful for Norman in the third frame. He connected with a right on the chin that caused Norman’s right leg to lift up, a clear sign the punch was solid. Norman nodded in response and motioned him to bring it on.

Rodriguez (9-2-1, 7 KOs), 29 of Los Angeles, has a similar story to another famous fighter, heavyweight world titleholder Tyson Fury. Following his professional debut as a junior middleweight in March 2010, a third-knockout over Najee Hayes, Rodriguez blew up to 230 pounds. He subsequently did not fight for the next five years. But in September 2015, Rodriguez returned to 154 pounds with a renewed sense of optimism. A welterweight in this bout, Rodriguez dug to the body in the fifth round with a left hook and followed up with an uppercut to the chin.

Norman and Rodriguez took turns fighting off the ropes in the sixth round, but it was Norman who got the better of him with a strong right hand that knocked Rodriguez’s head back. Norman threw 105 punches in the frame.

In what had been a great fight, it all came to an end in the seventh when during a fierce exchange, both fighters came together, but it was Rodriguez who got the worst of it, as blood poured from a deep laceration above his right eye. It did not take the ringside physician long to rule that Rodriguez, who lost for the second time in three fights, was in no condition to continue.

For “The Assassin II” Norman (17-0, 14 KOs), 19, of Atlanta, the son of former 168-pound boxer Brian Norman, his career moves on after an impressive performance.

Judge John Mariano scored the fight 76-76 even, and two judges had the match shockingly wide as Elijah Staples and Tim Taggart Sr. turned in scores of 79-73 and 78-74. The Ring had it the same as Mariano, a draw.

Both fighters felt each other out in the opening frame, and referee Mark Nelson warned Angulo after the conclusion of the round for landing a left hook below the belt.

Guerrero, who went 110-10 as an amateur and won two junior national titles, buzzed Angulo with a hard combination in the second round and topped it off with a crisp left hook that knocked his head back. Angulo landed a right hand towards the end of the round, but Guerrero, a self-described brawler, shook his head “No,” and fired back with a right hand and a left hook that grazed Angulo’s ribcage.

But Angulo (12-1, 5 KOs), 23, of Ecuador, who lost for the first time in six bouts dating back to April 2017, outworked “Pork Chop” in the third frame. He surprised Guerrero with a double jab that split the guard and a right hand that momentarily buckled him. Angulo also mixed in some angles and head movement that left Guerrero confused and out of position to mount anything offensively.

Angulo maintained his momentum in the fourth round. He worked behind a solid jab to keep Guerrero, who was missing wildly, at bay. Angulo then followed up with a solid combination to extend his lead on points.

In the fifth round, Angulo cut off the ring effectively and used his reach and height advantage to bully Guerrero against the ropes.

Guerrero (12-0, 9 knockouts), 22, of Irving, Texas, connected with his best punch of the fight in the sixth round, a short right hand and a short left hook that hurt Angulo, who backed up as Guerrero smothered him. But Angulo got his legs back underneath him, and both men fought at an even pace from that point.

The seventh was a massive turnaround for Guerrero, who buzzed Angulo late in the round with a series of clubbing rights that knocked his man back.

Both men fought bravely to the end. The eighth round began with Guerrero swinging for the fences. A four-punch combination badly hurt Angulo, who was all but out on his feet as Guerrero battered him with a series of lefts and rights. Then with about 15 seconds remaining, Guerrero pushed Angulo to the canvas, which allowed him extra time to recover after Nelson ruled no knockdown.

2016 Olympian Aram Avagyan rallied to win a majority decision over previously unbeaten Dagoberto Aguero on the opening fight on the undercard of the ShoBox card headlined by Brandun Lee vs. Camilo Prieto at Grand Casino in Hinckley, Minnesota.

Avagyan (10-0-1, 4 knockouts), 29, a Russia native based in Armenia, was floored in the first round by Aguero from a massive overhand right.

The knockdown gave Aguero a ton of confidence, as he continued to maul Avagyan, who was still on wobbly legs.

Aguero dropped Avagyan with a chopping right hand in the second round as both fighters were trading big shots in the center of the ring, but it was Aguero who quicker to pull the trigger.

The third round was dictated by Aguero, who nailed Avagyan with a combination of lefts and rights. However, Avagyan landed some left hooks to the body early in the frame.

But Avagyan, a 2016 Olympian who also won bronze medals at the European championships in 2013 and 2015, finally found his rhythm in the fourth round. He cut off the ring and mauled Aguero throughout the fight, connecting with solid right hands to the body, and leaned on his opponent.

Avagyan, who studies criminology at the Russian Armenian University in Yerevan, the capital of Armenia, continued to mount his comeback in the fifth round. He roughed up Aguero with rights to the body and followed up with an overhand right that clearly bothered his foe.

Aguero connected with a couple of big right hands in the sixth round, but they did not seem to bother Avagyan, who manhandled Aguero and clubbed him with lefts and rights to the body and shoved him all over the ring. The referee also warned Aguero several times for holding.

Avagyan took control of a completely winded Aguero, whose legs were wobbly and had finally begun to betray him. After the referee warned Aguero that he would take a point away with another hold, Avagyan was all over him and dropped him to a knee with a monster right hand in the eighth frame. But the referee missed it and failed to rule it a knockdown.

Avagyan, who also got dropped in his previous bout early against Francisco Esparza and turned the tables to win on points, was hurt in the final round from a right hand but held on to remain on his feet. Both fighters fought hard to the closing bell.