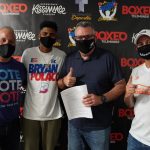 Polaco (1-0, 1 knockout), who resides in Fajardo, Puerto Rico, made his professional debut last Friday night in Kissimmee, Florida, stopping journeyman Elliott Brown at 1:29 of the opening round.

The 22-year-old, who was Puerto Rico’s national champion in 2017 and 2020 and was ranked among the top 10 in the world, made the decision to turn pro after sitting idle due to the COVID-19 pandemic.

“I am glad to have signed with All Star Boxing,” said Polaco. “They have a solid Puerto Rican fan base in Kissimmee, and [that] is where I want to build my career. Due to the pandemic, boxing in Puerto Rico has come to a complete stop. I will stay busy in Kissimmee, Florida.”

Tuto Zabala Jr., who is the promoter for All Star Boxing, believes Polaco could become a solid pro.

“We are glad to have Bryan as part of the All Star Boxing family,” said Zabala.

“Given the opportunity, Bryan will look to qualify to represent Puerto Rico in the Tokyo Olympics (next) summer in the 152-pound weight class,” said Ruben De Jesus, All Star Boxing’s Director of Operations. “We certainly are going to support his endeavor. In the meantime, we will keep him very busy.”