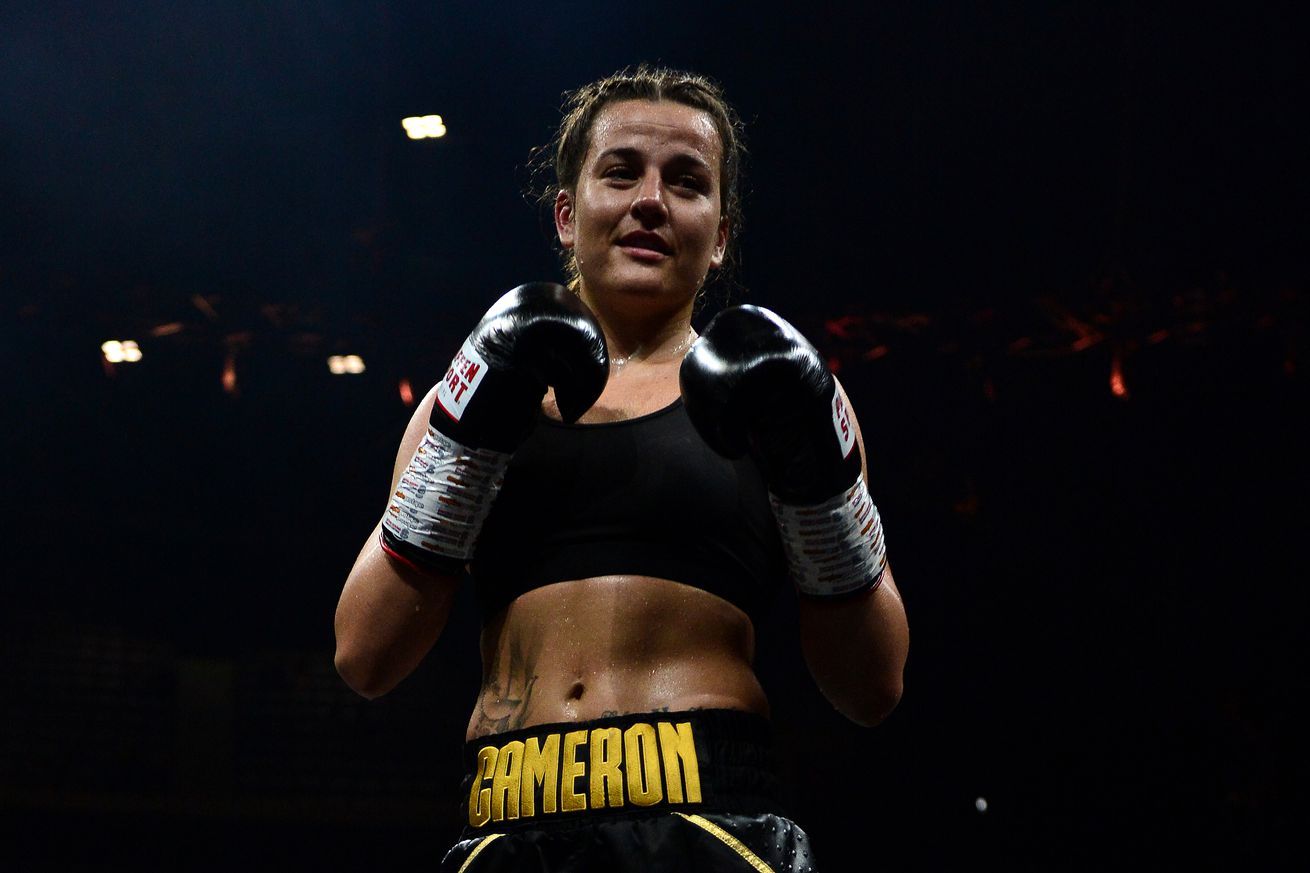 The 29-year-old Brit wants her own glory, and isn’t going to wait for the Irish star.

Unbeaten Chantelle Cameron was an amateur standout who had some history with Katie Taylor, as the English fighter lost to the Irish star in the semifinals of the EU Championships in 2011.

Having only switched to boxing at age 18 after fighting in kickboxing and Muay Thai from the age of 10, Cameron was understandably a little over-matched then by Taylor, who was one of the best and most experienced fighters in the world. But Cameron hoped to someday face Taylor in the pros, having come to the pro ranks in 2017.

She secured mandatory title shots at both 135 and 140, where Taylor has held belts, but despite signing with Matchroom, the fight just wasn’t materializing.

On Sunday, Cameron (12-0, 7 KO) will face Adriana Araujo for the vacant WBC 140-pound title, recently given up by Jessica McCaskill, as she seeks to carve out her own legacy in the sport.

“Everybody wants to fight Katie Taylor, and I would have been hanging around waiting for her,” said Cameron. “I’m 29 now and I want my own world titles. MTK and Jamie (Conlan) told me to move up to (140) and I got my mandatory there, now I’m in this position. It’s a short career so I don’t want to be wasting my time, especially with everything that has happened this year.

“I’ve been waiting for this moment since I turned professional and it’s amazing, especially as I’ll be making my debut as a Matchroom fighter. It’s a dream come true. I’m good at visualizing, so I visualize the fight in my head and I visualize myself lifting the belt. It looks good, I think it will suit me! It would mean the world to me to call myself world champion.”

How to Watch Buatsi vs Calic

As far as her opponent, Cameron isn’t about to look past Araujo (6-0, 1 KO), a 38-year-old Brazilian who started her pro career in 2017, too, and has fought exclusively in her home country to date. She has already won and defended the WBC’s “silver” belt, so Cameron doesn’t want to chalk this up as an easy win, but she is confident of victory.

“Adriana is a tough girl, really tough. She loads up with her punches. I don’t think she’s a bigger puncher than me,” Cameron said. “I’ll be wary of her punches, obviously I don’t want to be getting caught, but we’ve got to see if she can take my shots as well, because I know I can punch. She has beat some good names and has a good pedigree, so I’m expecting a tough 10 rounds and can see it being a bit of a war.

“I feel like I’m a lot hungrier than most. I don’t think there’s going to be anyone that is as hungry as me. I’m not going to let anyone stand in my way. I’m 12-0 but I feel like I’ve been waiting a long time for this opportunity. I’m not looking past Adriana at all, the last thing I’ll be is complacent because I know she’s going to be tough and give me a hell of a fight.”

And Cameron, now 29, also recognizes that a loss to Araujo would cut down her chances of landing the bigger names out there in women’s boxing, at least in the near future.

“At the end of the day, I need to get past people like Adriana if I want the big fights. The only time I take a backwards step is when I want to,” she said. “I’m not going to be bullied. There’s going to be fireworks. It’s going to be a trade-off. I’m also going to box, I’m not just going to be brawler. I’m going to aim to show a bit of everything and show people what I’m capable of. I’m not just a one trick pony. Fingers crossed I win this and then the journey will continue where I go for the other belts and look to unify the division.”