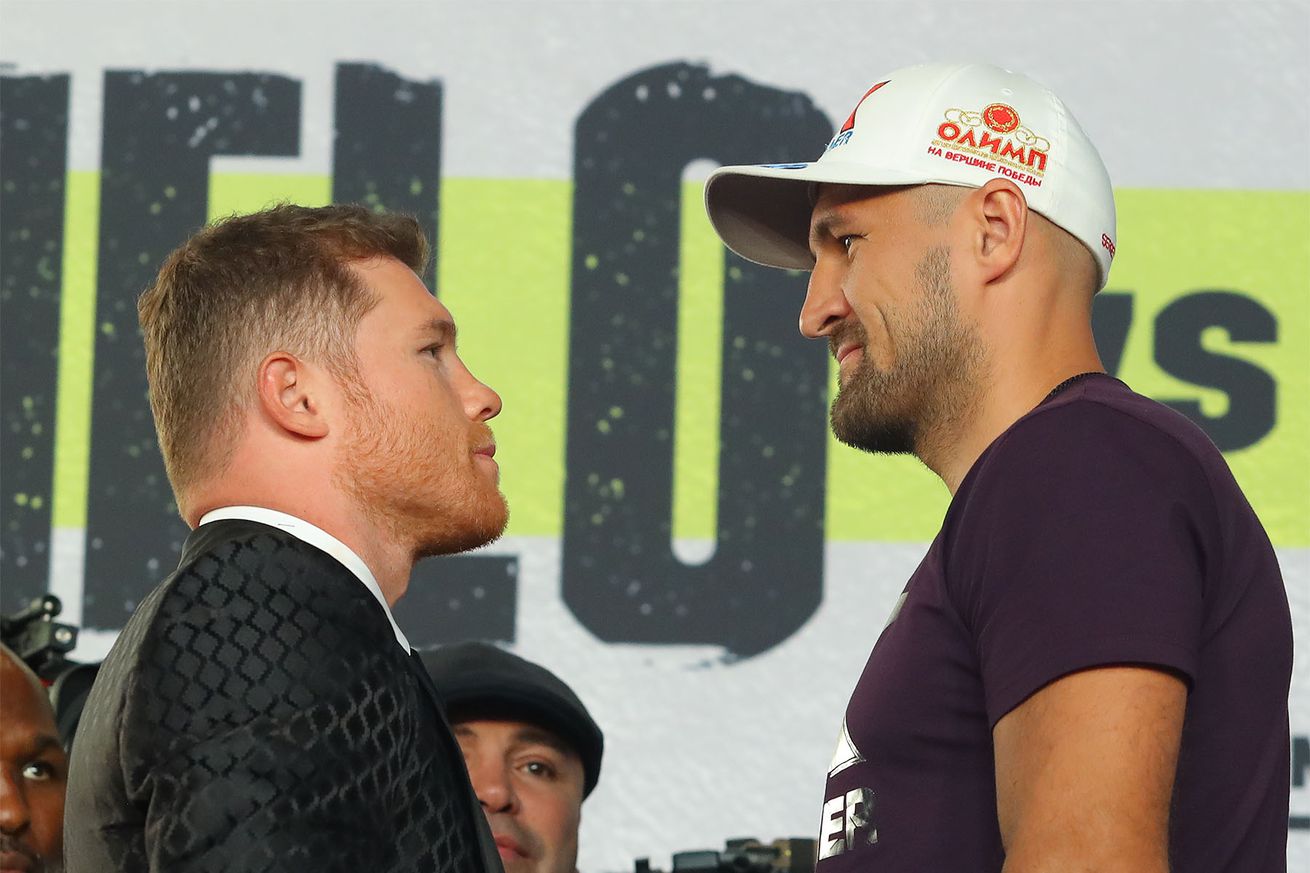 The Canelo-Kovalev presser was standard at a glance, but there was — and is — a lot going on around this fight.

They came, they saw, they…did a selfie together?

Brand new world we are in, isn’t it? And that was cemented a few different ways in the weeks leading up to the kickoff presser in Los Angeles, to bang the drums and honk the horns for the Nov. 2 clash between middleweight/sometimes super middleweight Canelo Alvarez and light heavyweight ace Sergey Kovalev, who is seen by some (many? including his foe?) as being on the downside of the aging slope.

Hardcore fight fans know that this presser had some issues swirling around it, namely, mostly, the goings on at Golden Boy Promotions.

What a half week they had, as their lead dog next gen hitter Ryan Garcia went at it, publicly, on social media, and took aim at Oscar De La Hoya and company for not managing his last fight, set for Sept. 14, correctly.

They all kissed and made up, or so it looks, with the formerly warring parties announcing that they’ve gotten on the same page, and that the 21-year-old Garcia has received a lucrative contract extension.

That kerfuffle is actually pertinent to the Canelo vs Kovalev deal, because Canelo’s relationship with Golden Boy has also been a work in progress. Need evidence? This is something he said on Wednesday about GBP boss De La Hoya, as reported by Mike Coppinger:

Canelo says he considers his business with GGG settled and he’s not motivated to fight him a third time. A reporter told Canelo that Oscar De La Hoya said he would fight GGG a third time. Canelo said Oscar says “many things that don’t make any sense”

Now, first things first. Let’s stay in the present, and try to stay on message, and deal with the present reality, re: the middleweight versus light heavyweight scrap.

But, darn it, that Canelo statement is a bit too tantalizing to gloss over.

What does he mean by that? One would assume — I would assume, I did assume — that a third Canelo vs GGG fight was a given. Didn’t and don’t all of us assume that? But maybe Canelo doesn’t? How is that possible? I mean, he had to know that a third fight with Gennadiy was the main driver of DAZN signing him to that monstrous deal. Didn’t he?

Now, I haven’t seen the contract which laid out terms for Canelo. But I would assume, and hope not to make and “ass” of “u” and “me,” that the Canelo-DAZN deal spells out the stated desire to have a third Canelo vs GGG fight. But I think I may have been assuming incorrectly — and Canelo’s phrasing there gave me the hint to understand that.

Canelo has immense power, and he’s driving his career vehicle. That has become more apparent in the last six months. But when I say “his” deal with DAZN, I think it’s wiser for me to reframe it, and refer to it as “the deal between Canelo and Golden Boy and DAZN.” Because, if you recall, when at the end of last year Canelo made that ballyhooed announcement, we also learned that Golden Boy would be entering into a relationship with DAZN. GB’s fighters would have a new platform home, and the OTT behemoth would be paying handsomely for use of services of Oscar’s fighters on the streaming service.

And, again, I don’t see that contract, no one is letting me take a gander at that. But maybe there exists contractual phrasing which promises a third Canelo vs GGG fight — only, those terms are shared by Golden Boy and DAZN, not Canelo and DAZN.

That interpretation, that would explain the seeming gap that exists, and how Canelo isn’t on that same page as other people you would assume he would be. And back when the massive windfall deal was being formed and hatched, perhaps Oscar and his guys knew that Canelo wasn’t crazily keen on a third fight, but figured they’d get their guy to come around to it — but they didn’t want to force his hand, they just wanted to get the deal done, and then circle back, and tie up that loose end. Does that sound plausible, knowing what we know now, and hearing Canelo’s take on the issue?

And here now is an opportune time to get back to the present, traffic in the now, because none of the principals are going to wade into contractual terms with this media member.

On Nov. 2, we will see Canelo fight a much-anticipated scrap. His last one was fairly anticipated too, fans were amped to see if Danny Jacobs could wreck the momo of Canelo’s deal with DAZN. It turns out no, Jacobs couldn’t out-box or out-fight the redhead.

OK, my anticipation dipped a quarter notch when I saw Kovalev seem pleased to be involved, as he and Canelo posed for a selfie together. Maybe I’m old school, but I prefer the fighters to stomp and growl, show a degree of snarliness in the leadup to a bout, as that suggests the in-ring action will match the tone of the pre-fight interaction. Jacobs and Canelo had snarling and then the bout was really all chess-match. I do worry that we see the same come Nov. 2, and that “let’s take a selfie” vibe bleeds into the ring.

I have pondered this new reality we are in more than a bit, and sometimes think aloud that maybe these outsized purses, while massively beneficial outwardly to the athletes, do have unintended negative consequences.

If Kovalev’s package is $12 million and after chopping up pie slices he comes away with maybe $9 million or whatever, then that could function as a fallback pillow. It could enter into a head, when the going gets tough, “Eh, whatev, I got my retirement fund and it’s fat, why should I soldier on when it looks mega-bleak?”

OK, I hear you — that is a theory, one grounded in human nature of some beings, and one could argue with conviction that Kovalev deserves my trust, that when the going gets tough, he won’t get going into fallback mode, but will rise to the occasion and deliver a rousing response. Here’s hoping!

Money matters, and it often corrupts, and that’s not an indictment made from a high horse–human nature is complex, and I’d rather see the fighters get paid more handsomely than less. But that element could be something in play, in regards to what type of fight we see in Las Vegas Nov. 2. I hope for the best.

Another issue that popped up right around this presser was the word that DAZN has a “new sheriff in town” mentality. Joe Markowitz told Mike Coppinger that “the days of inflated purses are over” at DAZN. Interesting that Markowitz came out and said that, rather than letting a new pay scaling system be revealed behind close doors. Might as well blast that memo out, far and wide, so managers understand that what played in the last year won’t so much going into 2020.

From the fan perspective, I dare say this development could be beneficial, in that the marketplace will or should reset, and expectations will be right-sized. This could result in managers and fighters not getting seduced by the thought of a DAZN lotto ticket and instead grind the old fashioned way.

To summate, it feels to me like the Canelo case is being smartly played by Team DAZN. Fair to say we all know they wanted Canelo vs GGG 3, but they didn’t get it. And rather than going scorched earth, or letting pride take over, it looks like they will be patient. Fans will continue to let Canelo know they want to see him battle GGG a third time, and I am betting the Mexican pugilist and Oscar get back on that same page, and figure out when that makes sense.

Seems smart if that is what John Skipper and company are banking on — give Canelo, a proud warrior, a bit of space. Maybe in his next fight, he takes on a Jaime Munguia, maybe in May, and then, after a nice long break from GGG, signs on to do a third Golovkin bout in Sept. 2020.

But of course, we ponder, with the full realization that this sport is that theater of the unexpected, so only fate knows what will actually transpire between now and Sept. 2020. Stranger things have happened than seeing a light heavyweight “welcome” a middleweight rudely to his house, and force a reset of all parties’ plans.