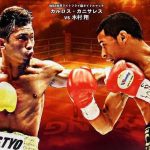 In what was his first fight in 10 months, Canizales used his impressive skillset to befuddle the former WBO flyweight titleholder who had elected to drop down in weight for this opportunity.

Kimura pressed the fight all the way but barely troubled the diminutive 26-year-old who moved constantly and created angles for his work, picking off the Japanese fighter whenever he closed the gap.

Canizales (22-0-1, 17 knockouts) will now likely be on the lookout for Ring champion and WBA titleholder Hiroto Kyoguchi.

On the same card, China’s Can Xu stopped Shun Kubo in six rounds.

Xu, who is ranked No. 7 by The Ring at 126 pounds, easily picked apart his Japanese opponent dropping him in the fifth and stopping him at 1:16 of the next frame.

At junior featherweight, Sophon Klachun (5-3, 1 KO) edged Hua Long Zhu (2-1, 2 KOs) by six-round split decision. Scores were 57-56 twice for Klachun, while the other judge scored the same for Zhu.

Editor’s note: Both Canizales and Xu were defending respective versions of the WBA title which are unrecognized by The Ring.