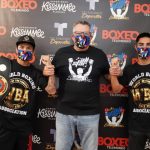 Journeyman Dennis Contreras has recently breathed new life to his pro career. Carlos Flores has built an unbeaten record, but has yet to fight a noteworthy opponent.

Both will square off in a compelling clash of featherweights Friday night at the Osceola Heritage Park in Kissimmee, Florida. The 10-round bout will headline a Telemundo telecast (12 am ET/ 9 pm PT).

Friday’s clash will mark the first ‘Boxeo Telemundo’ telecast of the 2020 fall season.

Contreras (22-10-1, 20 knockouts), who resides in the boxing hotbed of Guadalajara, Mexico, had lost 8 of 10 fights before defeating unbeaten Fernando Garcia on May 25 of last year. Contreras returned to the ring 15 months later on August 28, stopping fringe contender Belmar Preciado of Colombia in round 5.

Despite being down on two judges’ scorecards in the Preciado fight, the 28-year-old left an impression on promoter Tuto Zabala.

“Contreras did very well in his ‘Boxeo Telemundo’ debut,” Zabala told The Ring Wednesday evening. “Because of the big win against Preciado, we decided to bring him back immediately. He is hungry to challenge for a title and is being trained by (former WBC featherweight titleholder) Alejandro ‘Cobrita’ Gonzalez.

“On this occasion, (Contreras) is facing an unbeaten fighter who is making his national television debut. Flores is coming to this fight very well prepared with trainer Pedro Moran. We expect a very competitive bout.”

Flores (20-0, 11 KOs) has split most of his pro fights between his hometown of Tijuana and Guasave, Mexico. He last fought on October 4 of last year, knocking out Giovanni Juarez in round 5.

The 20-year-old has yet to face a fighter with a winning record.

Omar Rosario (1-0), who signed a promotional deal with Top Rank in August, will square off against Matt Gavers (1–4-1) in a four-round junior welterweight bout.

Fringe featherweight contender Hairon Socarras will face journeyman Julio Buitrago (13-23, 3 KOs) of Nicaragua in a six-round bout. Socarras (22-1-3, 14 KOs), who is originally from Cuba and now resides in Miami, has not fought since losing by knockout to Ryan Walsh on October 4 of last year.

The All Star Boxing card will be the first of four consecutive ‘Boxeo Telemundo’ telecasts that will air on Friday nights.