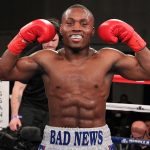 Before his fight Wednesday night on Showtime’s ShoBox: The New Generation, Charles Conwell got a chance to lie down and relax. The 2016 U.S. Olympian wasn’t alone. He had a feeling Patrick Day’s presence was there before his 10-round junior middleweight test against Wendy Toussaint.

“I just smiled and kept relaxing, going over the fight in my head, every round,” Conwell recalled. “I felt like Pat’s presence was there. It’s a beautiful thing knowing somebody is looking down on you, and looking after you, protecting you and rooting you on.”

A textbook right uppercut cleaved Toussaint’s defense and broke his nose. Toussaint kneeled and took a 10-count from referee Johnny Callas, who waved it over at 2:42 of the ninth round.

Conwell admitted he’s getting closer to healing after the tragic death of Day on October 16, 2019, four days after Conwell stopped Day in the 10th on October 12, 2019.

“I think I would give myself a C or a C-plus,” said Conwell in assessing his own performance. “I was doing a lot of waiting, but as time went on, and my coaches pushed me, I just had to wake up and get back in there.

“It was the ring rust and this being my first main event, I had to get a little bit of the fight jitters out. My right hand feels well. I hit him with a right in his forehead, and my wrist jammed. It was painful for a second. I had to work through it. It feels good. Nothing is broken.

“I think I’m reaching that point in healing. I’m getting more comfortable in the ring, settling into myself, and feeling better each time I get into the ring.”

A Conwell twisting right uppercut broke Toussaint’s nose in the ninth, and it could lead to bigger things for Conwell.

“I had to go around his real, tight defense, and that uppercut landed right on the bridge of Toussaint’s nose,” Conwell said. “I’m happy the way it turned out.”