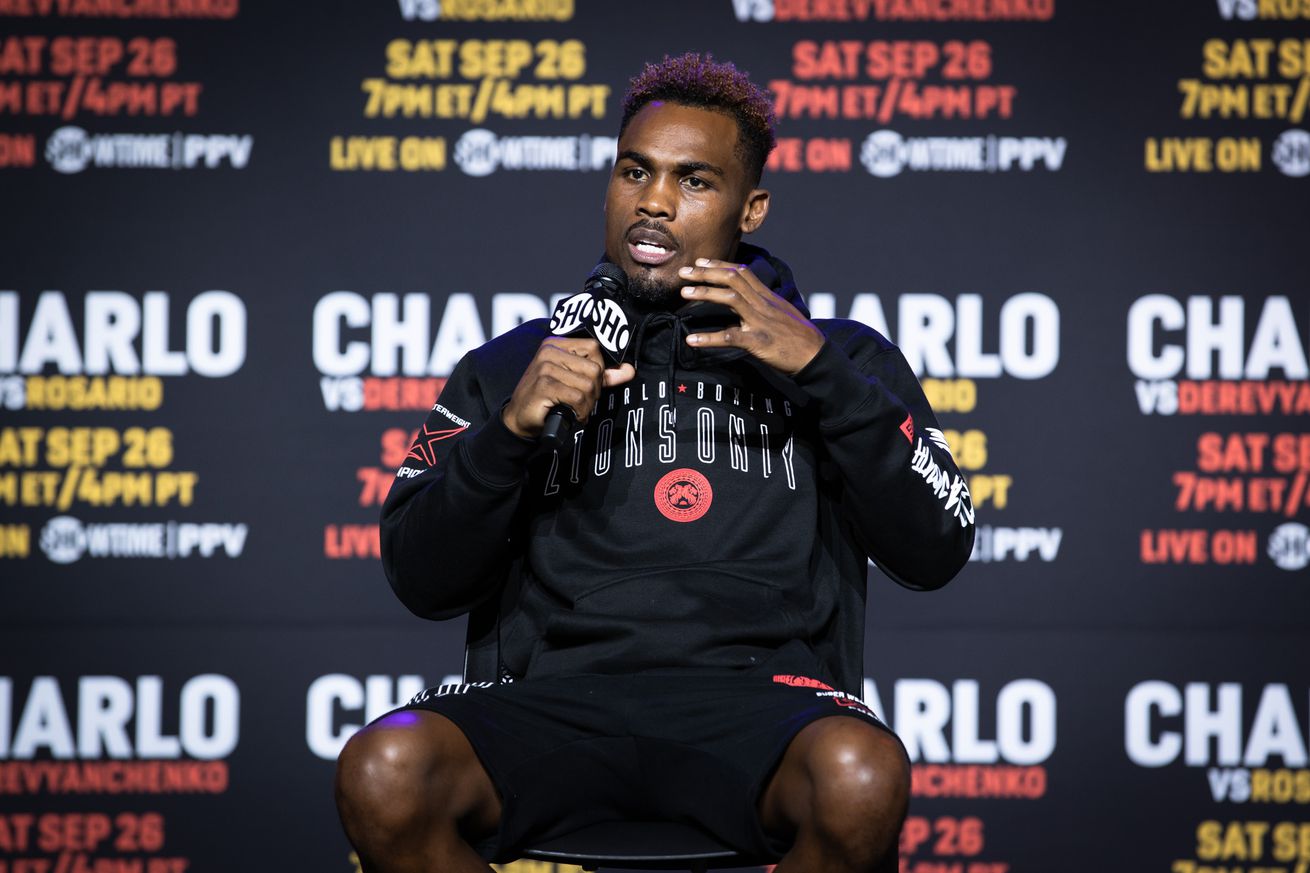 There was a good deal of respect between the two 154-pound titlists at today’s presser.

Jermell Charlo and Jeison Rosario are set to meet in a co-main event this Saturday on Showtime PPV, with three 154-pound titles on the line (Charlo’s WBC and Rosario’s WBA and IBF) in a unification bout that should leave us with a clear No. 1 man at junior middleweight.

At Wednesday’s final press conference, there was a lot of respect shown between the two fighters, and both men are expecting a good fight.

“This is about my legacy and my career. I want everyone to see what I’m made of,” Charlo said. “Rosario is a tough fighter with a lot of good attributes. He’s coming to fight. Styles make fights and we’re going to see that in the ring.”

“Jermell is a great fighter with a lot of power, but I’m the better overall fighter and the world will see that on Saturday,” Rosario offered.

The 30-year-old Charlo has the honor of going on last on the broadcast, with twin brother Jermall going on third in the other half of the co-main event, on a show that will be split into two parts.

“Saturday night is going to be my history-making performance,” Charlo said. “This is something that I’ve always wanted and that I’ve always trained for. I’ve put in the hard work for every fight I’ve ever had, and this is what it’s all been for.”

This will be the first pay-per-view headline bout for either of the Charlo brothers, and Jermell is anticipating that fans will be impressed with the event and their performances in particular.

“People will say that they can’t wait to see us fight again after Saturday. We come to fight. We prepared all our life for this. Now is our time,” he said. “The big dogs are here to stay. We’re veterans in this game and we love this sport. To make it to this stage, there’s nothing bigger for us. This is our Super Bowl. This is our national championship. It’s time for us to go get our belts.

“We’re going to put on a show. Knowing my brother is also fighting gives me more energy. Fight night is when you see all our excitement and all our hard work pouring out. This is huge for us. We’re both doing our thing and feeding off each other’s energy.”

Charlo also said that he’s “going to bring some new tricks” to this fight, so we may see something a little different from Jermell in this one.

As for Rosario, there are understandably still some doubts about the 25-year-old from the Dominican Republic. He was expected, frankly, to be pretty easy work for Julian Williams in January. Instead, he stopped Williams in five in what is still a very strong contender for Upset of the Year.

“People are going to see on Saturday that it was no fluke that I beat Julian Williams the way that I did,” Rosario said. “This is going to be a war. I’m a warrior, and I’m going to find a way to win. That’s the only thing on my mind.

“I don’t feel any pressure, it’s an obligation — not only to my family, but to all of Latin America — to win these titles. There’s no room in my mind for the possibility of not winning. That’s going to be clear on Saturday night.”

There was a language barrier on the stage, but Rosario was pretty sure he’d gotten the gist of things.

“I don’t have to understand what Jermell is saying on stage to know that he thinks he’s going to win, just like I think I’m going to win,” he said. “That’s what makes this a great fight, but nothing is going to change my mindset.”