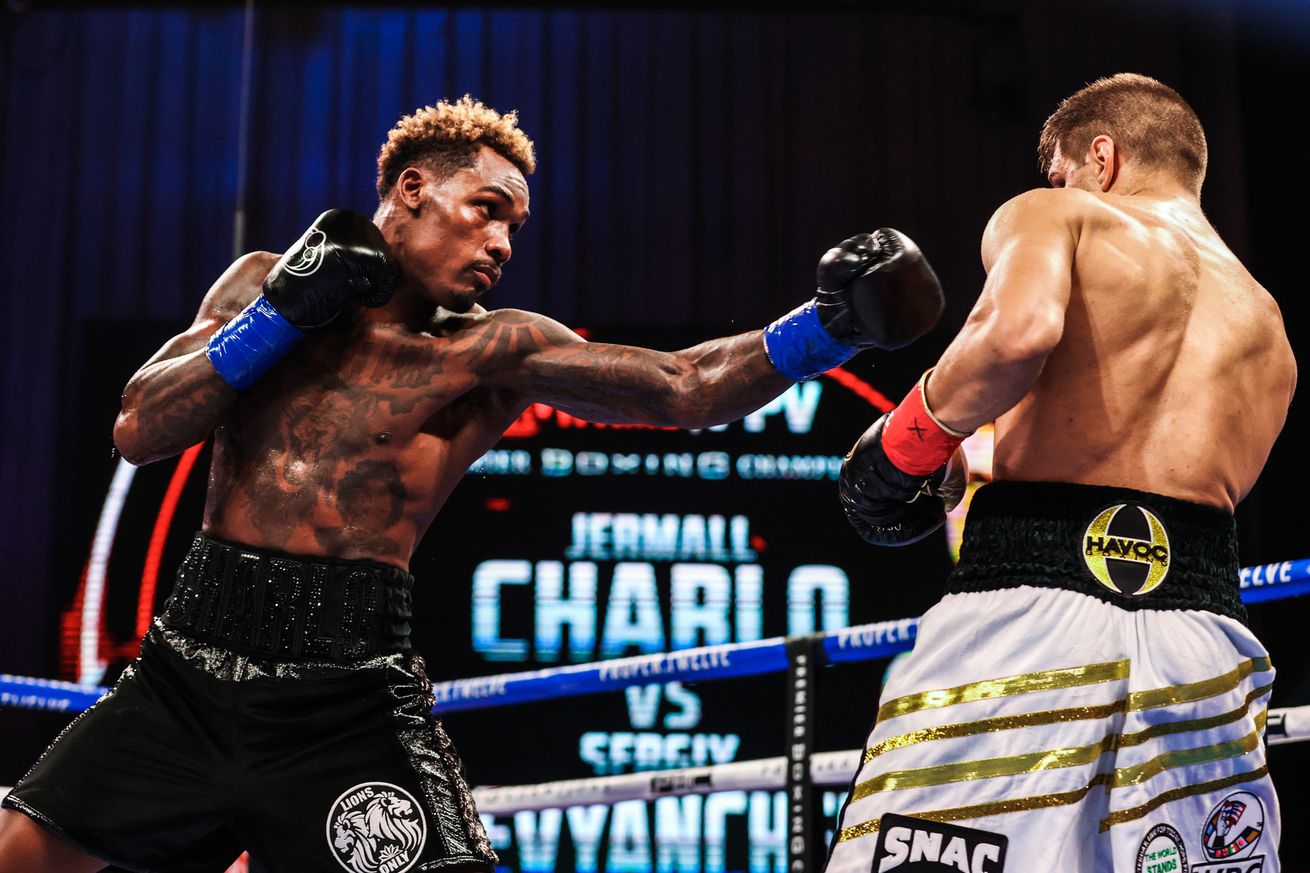 Jermall Charlo passed his big test, and has established himself as a top middleweight.

Jermall Charlo needed a serious test to establish himself fully as a top middleweight, and he got one tonight, passing that test with a big unanimous decision win over Sergiy Derevyanchenko to retain the WBC middleweight title

Our live coverage for the Charlo Doubleheader PPV continues here!

The 30-year-old Charlo set the tempo for the sort of fight he wanted early, using his superior length to keep Derevyanchenko (13-3, 10 KO) at bay, forcing the Ukrainian to eventually get a little more desperate.

Derevyanchenko, 34, nearly was dropped late in the third round, which led to him pressing a bit more from that point. Both fighters got rocked a bit in the eighth, with Derevyanchenko notably buckled, but again late in the round, meaning Charlo didn’t get a big chance to capitalize.

By the latter rounds, both of Derevyanchenko’s eyes were cut and pretty much swollen shut, but the veteran and former amateur standout just kept fighting to the best of his ability, keeping it competitive. In the ring after the fight, before the scores were read, Charlo displayed a lot of respect for Derevyanchenko, which was well-earned.

Once again, it was a very good title fight involving Derevyanchenko, who is now 0-3 in world title opportunities against Charlo, Gennadiy Golovkin, and Daniel Jacobs. You have to be really good to beat this guy, and this was probably the first time it was clear to the majority that he was really beaten.

“I made my team proud, I did what I was supposed to do. I executed the game plan. I passed the test, I’m happy, now back to the drawing board and figure out what’s next,” Charlo told Showtime’s Brian Custer.

“I stayed poised, I stayed composed,” he continued. “I stayed behind the jab. I did want to knock him out and make a statement, but getting a victory is statement enough.”

Asked what he wanted to do next, Charlo didn’t make any big challenges.

“The bigger fights are out there. I’m steady growing and learning,” he said. “I’ll let my team get to it, they make the best decisions.”

This one was fun for a while, but became a pretty vicious beating, as the 23-year-old Figueroa (21-0-1, 16 KO) just had too much firepower for a gritty Vazquez (15-2-1, 8 KO), who really shouldn’t have been in anything called a “world title fight” but gave it his best shot all the same.

Vazquez, also 23, worked his jab fairly effectively early on, but even then Figueroa’s relentless attack was giving him problems, and it just kept adding up round by round. Even if you nicked a few rounds Vazquez’s way — and I did, scoring it 87-84 Figueroa before the stoppage — it became really tough to see him actually winning the fight, because he could not back Figueroa down, and more and more, Figueroa kept backing Vazquez down.

A big difference in the fight was body work, as Figueroa landed 61 body shots compared to just three from Vazquez, but Vazquez also got his right eye blackened, bloodied, and pretty much swollen shut by left hands upstairs from the southpaw Texan.

Figueroa, like older brother Omar, is pretty much always going to be a lot of fun to watch, because he throws a lot of punches, fights without fear, and brings the heat. There’s still an obvious and open question of how he’ll do against higher-level boxers, as well as guys who do have the power to hurt him, but he’s fighting his way to those sort of opportunities, and he retained his secondary WBA “world” title (Murodjon Akhmadaliev has the real WBA belt) at 122 pounds with this win.

Ghana’s Micah, a former Olympian, came here to scrap, but he didn’t scrap as well as Casimero, who successfully defended his WBO bantamweight title with a stoppage at 0:54 of the third round.

Casimero (30-4, 21 KO) was supposed to fight Naoya Inoue in a three-belt unification this summer, but that was scrapped due to the pandemic. Both guys have said they want the fight — Casimero has aggressively repeated how much he wants it — and it could be a real cracker of a fight if we get it next year, maybe, after this and Inoue facing Jason Moloney on Oct. 31.

John Riel Casimero proves to be too much and stops @DukeMicahBFT in the 3rd round of this opening bout.#CharloDoubleheader: https://t.co/Unmne2BI8N pic.twitter.com/qcfCfPUAFJ

Casimero dropped the game Micah (24-1, 19 KO) in the second round, and referee Steve Willis really could have stopped it there, as it was obvious that the challenger’s legs were shot when he got up, and stumbled over into a neutral corner. But Willis gave the guy a chance. Micah wobbled through the remainder of the second round, his legs giving out once as he fell over but not on a punch, and to start the third, Willis sent Micah to the doctor for basically an on-the-spot concussion check. Micah didn’t look good then, either, but it was allowed to continue, with a warning that he had to show something.

He tried to show something, but Casimero kept showing more, and Willis stuck to his word and stopped it as soon as Micah got rocked again.