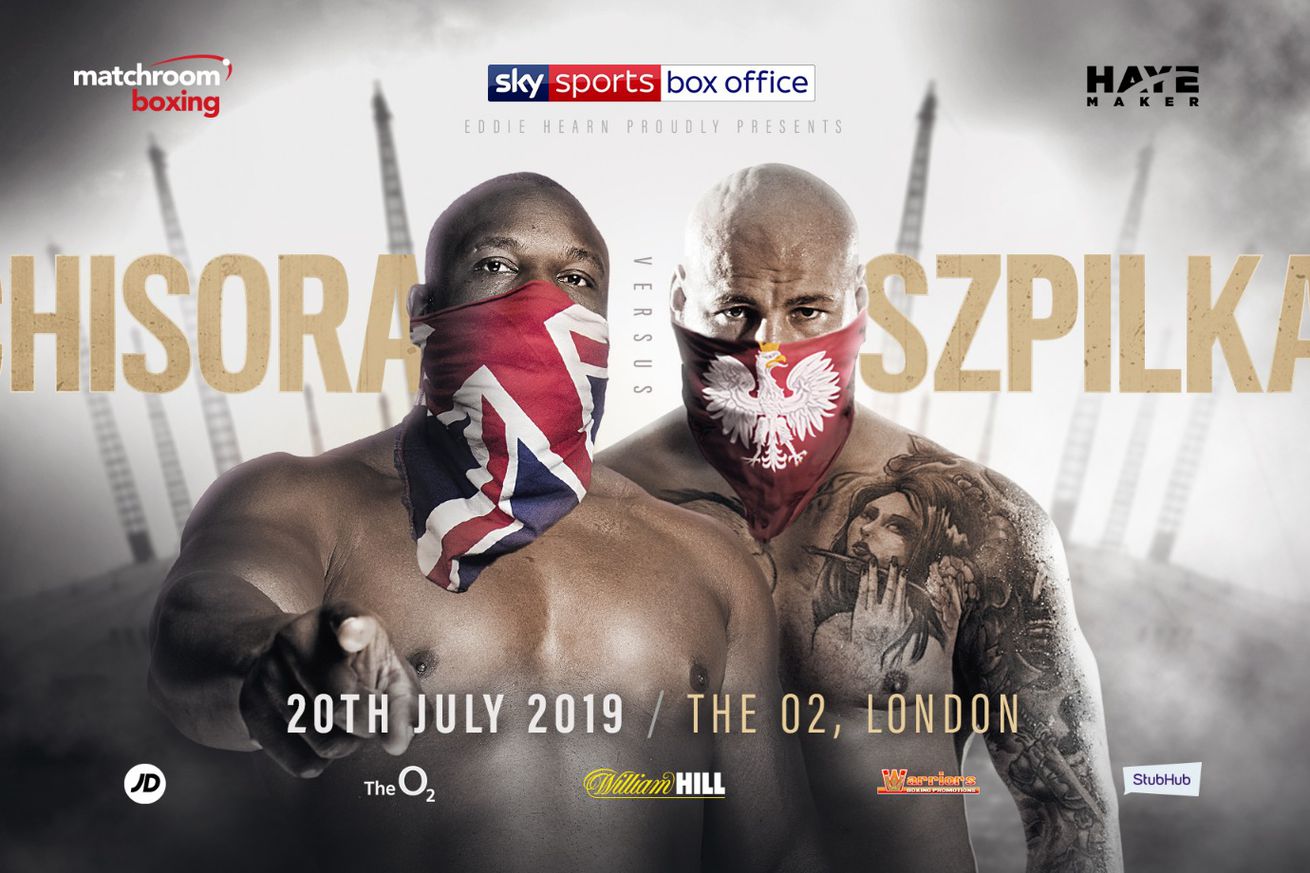 Another heavyweight clash is added to Matchroom’s July 20 bill.

Dereck Chisora and Artur Szpilka are set to meet on July 20, as the heavyweights will be part of a big night in the division at London’s O2 Arena, with Dillian Whyte vs Oscar Rivas headlining, and Dave Allen vs David Price also set.

We still don’t know if this card is going to air on DAZN or not, but it is set for Sky Box Office in the UK.

Chisora (30-9, 21 KO) is a 35-year-old heavyweight veteran at this point in his career, but he’s still a legitimate fringe contender. In 2018, he beat Zakaria Azzouzi and Carlos Takam via stoppage, then in December, he was highly competitive with Whyte in their rematch, leading on two of three cards after 10 rounds before Whyte knocked him out in the 11th.

In his last outing on April 20, Chisora was able to rather sleepily win a 10-round decision over Senad Gashi in a pretty miserable fight where Gashi didn’t want to engage at all, and Chisora, working with new trainer Dave Coldwell, was trying to box more.

Szpilka (22-3, 15 KO) is the sort of fighter who will engage, and may be able to bring out the old “War” Chisora. The 30-year-old Polish southpaw has been stopped in all of his losses — against Bryant Jennings, Deontay Wilder, and Adam Kownacki — but has won two straight over ancient Dominick Guinn and Mariusz Wach, the latter a split decision.

While Chisora has certainly mellowed over the years, both he and Szpilka have reputations for being a bit odd, to put it lightly, which Szpilka acknowledges.

“I chose this fight because we are both crazy men and it’s going to be a crazy fight!” said Szpilka. “Chisora is a good fighter, he is bull strong and he can box well. He turns up to every fight in great condition, so I know it is going to be a tough night for me. We are both warriors who like to fight, this will be violent.”

“July 20 is not going to be an easy night in the office, I know that,” said Chisora. “Szpilka is an unpredictable come-forward southpaw, I will need to be in the best physical condition of my career to win this war, but I’m ready. Remember, I’m true a fighter, I love the heat of the battlefield, I’m at my most comfortable when most fighters would want to quit. July 20 is going to be explosive, Szpilka won’t be hearing the final bell.”