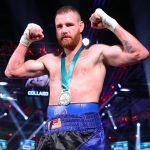 Clay Collard has been through the gamut before. On Tuesday afternoon, ESPN.com’s Steve Kim reported that Collard failed a COVID-19 test and had withdrawn from his eight-round middleweight rematch with Quincy LaVallais Saturday night on the Vasiliy Lomachenko-Teofimo Lopez undercard from the MGM Grand Conference Center.

In June 2019 in New Orleans, Collard (9-2-3, 4 knockouts) and LaVallais (9-0-1, 5 KOs) fought to a split-decision draw. Collard will be replaced by Quatavious Cash as LaVallais’ opponent.

In an exclusive to The Ring, Collard spoke about his disappointment, and his fear that he might contract COVID-19, since his trainer, Ryan Ault, has been recovering from COVID-19. Collard tested negative while he was training in Burley, Idaho, before he left for Las Vegas.

“This isn’t going to derail me,” said Collard, who makes an argument for Fighter of the Year, going 5-0, including victories three undefeated prospects in 2020. “I’m going to get back to work. I spoke to Top Rank and hopefully we’ll make this fight happen in a month. It’s a bummer that I’m not on the Loma-Lopez undercard. I found out at 2:11 (PT) this afternoon, right after I got off the conference call.

“I just got done doing all of the interviews, then I got the call. I was praying and hoping I didn’t have it. I don’t know what I’m going to do next. Top Rank may rent me a car and I may drive straight back to Idaho. I don’t want to be stuck 10 days here. I’m not completely sure what’s going to happen. They want me to stay 10 days, but I’d rather not.”

Ault has been through the roughest part of it. He appears to be getting better.

Collard also stressed that he’s been away from Lomachenko and Lopez, and nowhere the fight site.

“Top Rank has been great and they were smart in keeping everyone separated, and I’ve been separate from everybody else, and I may be quarantined here for 10 days,” Collard said. “It’s frustrating. As soon as I get to some smooth sailing, then this happens. I’ve already overcome so much adversity already. No one knew me before 2020. I’ve been through so much stuff that I’m going to get through this, too.

“I want to fight LaVallais. I don’t know if I can before the end of the year, but I want to, I’ll promise you that. I feel good right now. I’m going to brush this s— off like it’s the common cold. I have to overcome this, because I’ve overcome so much already. My older brother actually had COVID-19 and he had it for two weeks I have good people around me. Top Rank has been wonderful. They all reached out to me personally. They all told me that I’ll get past this.”

Collard has been calling himself the “O Collector,” for the five undefeated fighters he’s beaten. He was joking that he’s now “The Terminator,” saying as he laughed, “I’ll be back, baby!”

The post Clay Collard promises ‘I’ll be back’ after testing positive for COVID-19 appeared first on The Ring.