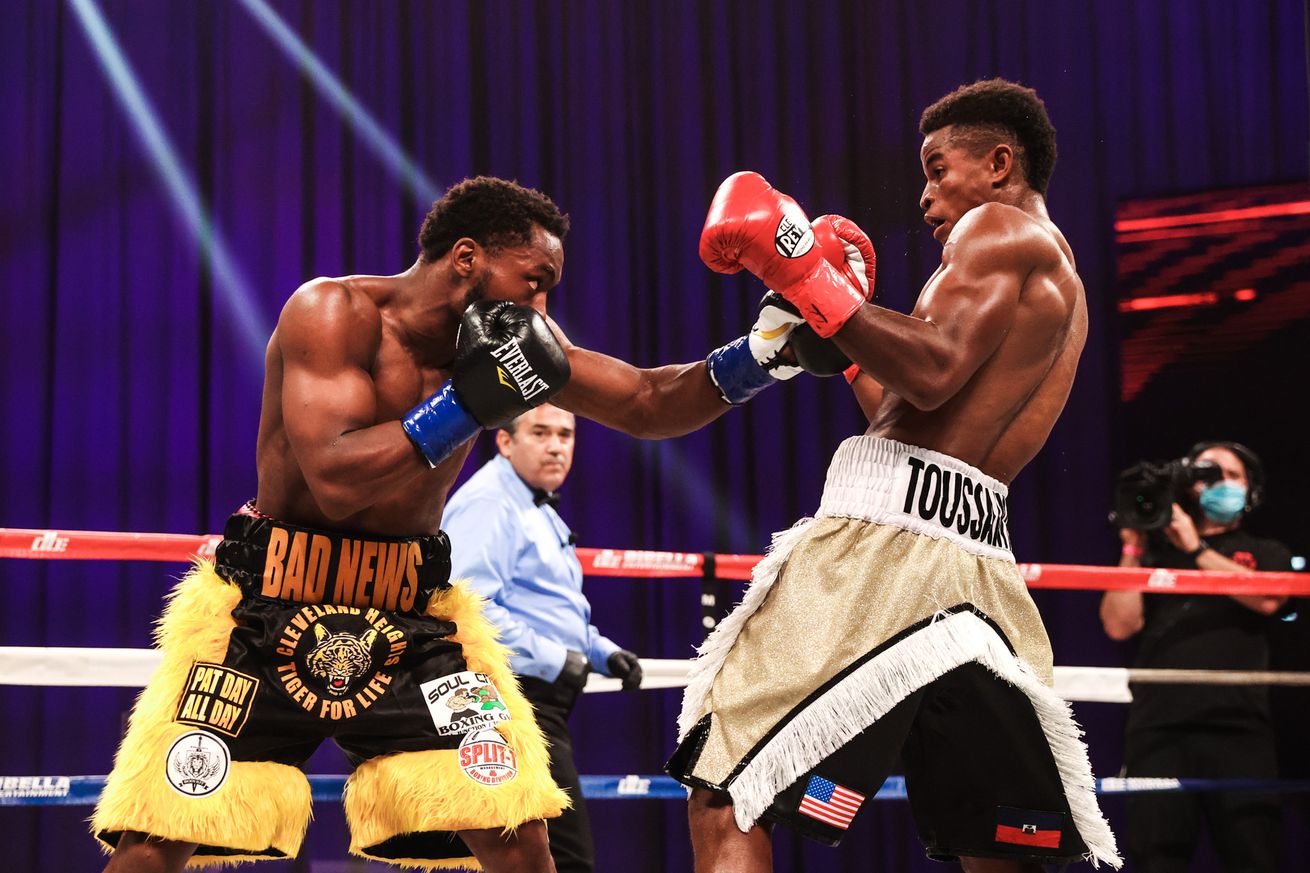 It was a night of early finishes on Showtime.

The 22-year-old Conwell (13-0, 10 KO) was cruising along pretty comfortably through eight rounds, wasn’t really turning up the heat but was in rather firm control of the fight pretty much the whole way. He did suffer at least a minor injury to his right hand late in the seventh round, but that was really about as much trouble as he had with the 28-year-old Toussaint (12-1, 5 KO), who overall just looked out-classed by Conwell.

The end came late in the ninth, when Conwell got a chance to uncork his hurting right on an uppercut, which split Toussaint’s guard and crushed his nose. Toussaint had a delayed reaction, but stepped back and took a knee. Blood was pouring out of his face and he choe not to answer the 10-count of referee Johnny Callas.

Conwell is at worst a solid prospect, has some power, has some solid skills. There are times when it seems like he doesn’t go to another level, but he has some explosiveness, too. It’ll be interesting to see him step up the competition, and his trainer Otha Jones Jr did a nice job here, pushing Conwell to turn up the heat going into the ninth round, saying they didn’t want to look average at the end if Charles wanted bigger fights.

The first knockdown was a flash drop, but a legit shot, too. The second was a lot heavier, and Callas probably could’ve stopped the fight there, but he gave the 24-year-old Flaz a final chance to show something. Flaz didn’t, and that was the fight.

No highlights of this one even though it was the nastiest KO of the night. It happened so early in the broadcast that the Showtime social media person might’ve been finishing up a corn dog or something.

But this was an absolute wipeout. On paper, at least if you didn’t look at the paper too hard, the 34-year-old Williams (16-4-2, 5 KO) presented a bit of a step up for the 21-year-old Lee (20-0, 18 KO), who really does need to be tested so that he can actually get better. But Williams had also gone 2-3-1 in his last six, and was 0-2-1 in his last three, all of which took place in 2019, and kinda just got progressively worse. He was routed over 10 by Mark DeLuca, a decent club fighter, then stopped in four by Abel Ramos, then went to a six-round draw with a .500 club fighter in Jose Medina.

Lee didn’t give Williams time to do anything, really. He hurt him within the first minute, and scored a knockdown with the ropes holding the veteran up in the corner. Moments later, Williams was down much harder on a couple clean shots, and referee Danny Schiavone probably could have stopped it there, but he let Williams try again, which resulted in a clean right hand from Lee, knocking Williams halfway onto the ring apron and flat out. Williams did get up and was able to congratulate Lee and everything, so the good news is he appeared to be relatively OK.