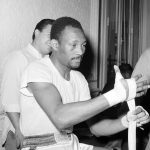 Curtis Cokes, the Dallas native who held the welterweight championship and later became an influential trainer, died Friday at age 82.

The Dallas Morning News reported the cause as heart failure, citing a source that he’d been in hospice care for a week.

Cokes compiled a record of 62-14-4 (30 knockouts) during a career that spanned 1958 to 1972. At 5-foot-8, he was long enough to jab effectively from the outside and trade punches in close, with a keen sense of distancing and a feared right cross.

He won his first eleven fights before suffering his first defeat, a decision to Manuel Gonzalez, in 1959. Cokes got his first break in 1961, beating champion-to-be Luis Rodriguez in Dallas, and rematching him four more times throughout the years. In their fifth meeting, Cokes stopped him in the 15th round in July of 1966 to earn a shot at the welterweight title Emile Griffith had just vacated.

The following month, Cokes defeated Gonzalez by unanimous decision on August 24 at the Municipal Auditorium in New Orleans to win the 147-pound championship. Cokes would hold the belt until 1969, defending the championship successfully against Jean Josselin, Francois Pavilla, Charley Shipes, Willie Ludick and Ramon La Cruz.

His streak would run out in April of 1969, when the Mexico-based Cuban Jose Napoles stopped him after the 13th round in Los Angeles. Napoles replicated the feat two months later, this time after ten rounds. The losses effectively ended his run as a championship level fighter, and he’d finish out his career against lesser opponents.

Non-boxing fans may have most likely seen him in the 1972 boxing drama Fat City, where he played Earl, a mild-mannered figure who, despite Cokes’ credentials, was not a boxer. Philadelphia-based promoter Russell Peltz, who watched his 1964 fight against Stanley “Kitten” Hayward at the Blue Horizon and later promoted some of his fighters on his cards, said the role fit him like a glove.

“Curtis Cokes was such a kind soul, an extremely low-key man and he was never full of himself,” Peltz wrote on his Facebook page. “The role he played in the movie ‘Fat City’ was perfect for him. It makes me think back to a time before trash-talking when fighters actually behaved like gentlemen at press conferences and weigh-ins.”

Cokes was inducted into the International Boxing Hall of Fame in 2003. He is survived by two brothers, Joe and Robert, a sister, Mary Helen Cokes, and five children, the Dallas Morning News reports.

The post Curtis Cokes, welterweight champion of the ’60s, dies at age 82 appeared first on The Ring.