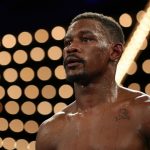 The 12-round bout will take place at the Talking Stick Resort Arena in Phoenix, Arizona. The fight will be streamed live on DAZN (9 p.m. ET/ 6 p.m. PT).

The crossroads bout between Jacobs and Chavez was originally scheduled to take place in Las Vegas but the fight was moved to Phoenix after the Nevada State Athletic Commission suspended Chavez, reportedly for refusing a recent drug test. There were no details as to why the commission in Arizona would not honor the suspension from Nevada.

The Chavez fight will mark Jacobs’ debut at super middleweight after a career of mostly fighting at 160 pounds, ultimately winning the vacant IBF title in October of last year. Jacobs recently announced he split from trainer Andre Rozier.

Jacobs (35-3, 29 knockouts), who resides in Brooklyn, New York, last fought on May 4, losing a unanimous decision to The Ring Magazine middleweight champion Canelo Alvarez. Jacobs had won his previous three bouts since losing a close decision to Gennadiy Golovkin in March of 2017. At age 32, Jacobs believes he can win a title against any of the major beltholders at 168 pounds. A win over Chavez might put him on that path.

“There are some great fighters and champions at 168 pounds and I believe that I will be a different beast up at super middleweight. Facing Julio is a great test for my first fight. He’s a former middleweight titleholder like me and he has the same goal as I do. Julio is always in great fights and I am sure that our styles will gel to be a thriller for the fans and I plan to announce my arrival at 168 pounds in style.”

Chavez (51-3-1, 33 KOs), who resides in Culiacan, Mexico, last fought on August 10, knocking out veteran Evert Bravo in the opening round. It was Chavez’s first bout since his one-sided loss to Alvarez in May of 2017.

The 33-year-old, who is the son of multi-division world champion Julio Cesar Chavez, is confident he can still achieve a great deal after defeating Jacobs.

“Going against Daniel Jacobs is the perfect fight for me because there is so much on the line,” said Chavez, who is trained by Freddie Roach in Hollywood, California. “A victory gets me one step closer to a world title and I’m not going to let anyone stand in my way.

“I know that Danny Jacobs is a former world titleholder and is a strong fighter with very good boxing skills. Those are the kind of boxers that bring out the best in me. I’ve been working hard in the gym and can’t wait to let everyone see what I’ve been working on. I’m very motivated to get the win and, at the end of the night, I will have my hand raised in victory. I will deliver.”

Francisco A. Salazar has written for The Ring since October of 2013 and has covered boxing in Southern California and abroad since 2000. Francisco also covers boxing for the Ventura County (California) Star newspaper, BoxingScene.com and FightNights.com. He can be reached by email at santio89@yahoo.com or on Twitter @FSalazarBoxing.