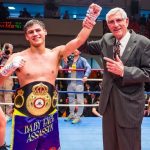 Danny Roman may have lost a close decision in his most recent bout but he still believes he is the best fighter in the world at 122 pounds.

Roman lost to mandatory challenger Murodjon Akhmadaliev of Uzbekistan by split decision, in a fight in which there were a handful of very close rounds. With the loss, Roman would lose his IBF and WBA junior featherweight titles.

Roman is currently ranked No. 4 at 122 pounds by The Ring.

It was announced last week that Matchroom Boxing, who co-promoted Roman with Thompson Boxing over the last couple of years, would not re-sign the 30-year-old, who resides in Los Angeles.

“Danny had an agreement with Matchroom, two years or five fights, whichever came first,” Camponovo told The Ring on Saturday. “We received a message from (Group Managing Director) Eddie Hearn that Matchroom did not want to extend our relationship with Danny. We respect the decision. Now we have to move forward.”

Roman (27-3-1, 10 KOs) turned his career around after a unanimous decision loss to Juan Reyes in October 2013. He became a staple of Thompson Boxing Promotions’ “Path to Glory” cards at the Doubletree Hotel in Ontario, California, and nearby Corona.

Roman would win his next 15 bouts before facing WBA titleholder Ryo Matsumoto in February 2018, winning by unanimous decision. After successfully defending the WBA title twice, Roman would capture the IBF title, via hard-fought majority decision, in an all-out brawl with TJ Doheny on April 26 of last year.

Camponovo stated he is willing to work with other promoters, whether by co-promoting Roman or staging a fight on a large platform.

“Danny is still ranked in the top 5 by the WBA. He is the mandatory challenger for the WBC title. He is not scared to face any of the top fighters in the division, including [WBO titlist] Emanuel Navarrete or [WBC beltholder] Rey Vargas. We’ve pushed for a rematch with Akhmadaliev. It was a close fight. A close decision. We hope that it still happens.

“We’re planning for Danny to return this summer. We’re more than happy to deal with Eddie Hearn if a rematch with Akhmadaliev can be made.”

Francisco A. Salazar has written for The Ring since October of 2013 and has covered boxing in Southern California and abroad since 2000. Francisco also covers boxing for the Ventura County (California) Star newspaper BoxingScene.com and FightNights.com. He can be reached by email at santio89@yahoo.com or on Twitter @FSalazarBoxing.

The post Danny Roman and Thompson Boxing Promotions move on appeared first on The Ring.