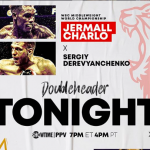 Pretty soon, it’s pull the trigger time. Or not…

High profile boxing is available to watch this evening, in the form of a pay per view event, put out by Showtime and Premier Boxing Champions.

To pony up, or to not pony us, that is the question.

This has been a query ricocheting in the heads of maybe a million people since this Charlopalooza was announced, on July 22.

And all the media covering the game pretty much have weighed in, because, you know, opinion trumps reporting, fact-finding, getting on the record details from pertinent people, very often. No, this isn’t ideal, but that’s not a shot at media, as a whole, more so an admission of recognition, at how “things have changed” as the internet exerted change on world culture.

Kevin Iole, maybe the best juggler in the game, who covers MMA and boxing, too, didn’t pull a punch when he told readers on his Yahoo platform that he thinks the cost of the Charlos-topped attraction is “ridiculous.”

On Sept. 22, he wrote, “The Showtime pay-per-view card is priced ridiculously high at $74.95, which all but guarantees that it will be extremely lucky to hit 100,000 buys. It’s a solid card, but there is no can’t-miss fight on it or a fight that people have been begging for. A lot of the card’s expectations center around the hopes that the public will buy into the Charlo twins as the next big thing in boxing.”

That sort of talk is, of course, well within Ioles’ rights. I’m not a censorship guy. But you must know that sort of overt stance-taking on such a business matter, is taken seriously by people who have a stake in the matter. We’ll not pretend to know how influential an Iole is, how many people will or won’t buy this offering based off his opinion. We do know that Walter Cronkite–look him up–would not have the breadth of platform today that he enjoyed in 1970.

We also know that being a reporter in this age holds more complications. I can speak to this; you are reading this story on RING, which is owned by Oscar De La Hoya, of Golden Boy Promotions. I said on the Chris Mannix podcast last month that I can testify that I have never not once heard from Oscar about something I did or didn’t write, and that is a good thing. But I’m also not one to get disingenuous on you. I pretty much recuse myself on potentially stickier issues that ODLH might find himself dealing with. And I also don’t make it a habit to monitor what other folks are doing and critiquing, because ombudsman isn’t a fun gig and also, “there but for the grace of God….”

However…Now and again, I will go there a little bit, because I think it is important to be transparent as possible, as often as possible. And today, that holds that much more, because we are living in the strangest of times, from a press perspective. Because opinions are held in such high esteem, and powers that be skillfully work to undermine the credibility of “journalism” as a whole, it is easier to spread propaganda, or simply spin a development or situation in the direction you wish to steer it.

I went to a family gathering not long ago, and a 70 something relative was talking about what might happen Nov. 3, when America decides if they want to extend their contract another four years with Donald Trump, or hand the reins to Joe Biden. I asked that relative for the origin of an assertion he made, where he saw or heard it. “That’s my feeling,” he told me. “That’s what my gut tells me.” I nodded, and no, I didn’t launch into an infomercial for the need to be a ruthless fact checker.

Anyway, back to this PPV. Am I telling you that you should “fact check” Kevin’s opinion that the price to watch is “ridiculous?” Nope. But I will tell you, or remind me, that the world is complicated. Iole covers UFC, and you probably know, they run one PPV a month.

PPV costs can be called “ridiculous” over here, and not so over there, right? Probably some of opinion on the cast has to do with perceived value, yes? And Sho has listened, and placed coin flip fights from tip to top on Sept. 26, one can argue.

We can digress further, and get deeper into the construct itself, but I will head that off, and tell you that I’m with many of you, I don’t adore paying “extra” money to watch the best fights very often. Seems like UFC fans, by and large, have accepted the reality better than boxing fans, and that in itself is grounds for study. Rather than taking that detour, however, it’s probably more helpful to you to understand that Dana White has for years sparred with Showtime sports boss Stephen Espinoza. Did that influence Iole’s opining that $75 is too pricey, and a price point of $40 would be preferable? Only Kevin can tell you. But if you didn’t know that White started going at Espinoza amidst the Floyd Mayweather-Conor McGregor promotion in 2017, and those two have a heated history, you should.

“I don’t wanna comment,” White said, when asked by The Athletic about the Saturday night faceoff between boxing and UFC, the “highly anticipated UFC 253 PPV headlined by middleweight champion Israel Adesanya vs. Paulo Costa,” as it was referred to. “That’s like the toughest kid in school picking on the biggest nerd. My daughter is 14 and her Instagram account is private and she gets more views than Showtime Boxing does.”

The price of the event also came up on the “Pug and Copp” podcast, with Lance Pugmire and Mike Coppinger, on Sept. 23. Lance reiterated he doesn’t dig the high price, and said he’s thinking about people who have lost their jobs. This isn’t the time for a house party, to share costs, he noted. “I would have hoped for a better way,” he said, telling listeners that Top Rank and ESPN found a way to not go the PPV route, with the Vasiliy Lomachenko-Teofimo Lopez event. Coppinger said that he realizes that talent isn’t inclined to agree to take less money, because of COVID restrictions, and so he basically gets it, that certain forces dictate this Charlo showcase going to PPV.

Espinoza has spoken about some of that, publicly. As many of you know, the Texas native won’t shrink from a good Twitter beef. He went with the overhand rights, at White, on Sept. 22:

And, hey, opinion alert…In my mind, Espinoza makes superb points here. (Also, disclosure: I am not fond of many aspects of White and his handling of business and negotiation and I find it a bit heart breaking that so many of his fighters take to social media to announce they can’t begin to make ends meet working for him.) It’s more than a bit interesting, because the Showtime honcho is sort of functioning as a labor leader there. Yes, one wouldn’t expect the head of a premium cable network to vote for the labor side over the titans of capital, but these are strange times.

Not to get too much deeper into the weeds, but let’s go a bit further in. The Athletic piece by Mike Coppinger referred to before did offer some nuance. “At least four boxers on Saturday’s show will pull in seven figures and some will rake in multiple millions, per sources. Despite the challenging climate with promoters unable to generate revenue from ticket sales (in addition to paying hundreds of thousands of dollars on COVID testing), PBC fighters haven’t endured purse cuts. That’s a big reason why the pay-per-vehicle is necessary: budget relief for the promoters and networks. Without PPV in this instance, we likely wouldn’t see these two excellent Charlo matchups, and for that reason, the event is worth your money if you can afford it,” he wrote. (Super side note: I subscribe to The Athletic, because the coverage is solid and to support journalism as a whole.)

Now, I’m not privy to what the Charlos have made and will make for these outings, but I’d be comfortable assuming that they may well be taking a bit less guaranteed money, and could be making more money if this PPV does better than naysayers believe it will. So, that would be a response to changing market terms, which have been bouncy since ESPN and DAZN started their OTT pushes. Eddie Hearn, especially, spending Len Blavatnik’s loot had a trickle down effect that made it harder for an Espinoza to put together programming. It has been pretty sweet for the fighters, but for the business as a whole, not as stellar. If the Charlos had accepted Hearns’ entreaties to jump ship from PBC to DAZN, they would have wanted premium purses, and the ability to pick and choose matches the way other DAZN-affiliated A siders have been able to.

Low risk/high reward fights would probably have been the result. So the Charlos have had that card to play, to leverage, when sifting possible scraps since mid 2018.

Espinoza does NOT have the leverage White does, owning a near monopoly on talent, so it’s not that his hands are tied, but his options are constrained more than Whites’ are. And how White handles his business results in quite regular instances of sad displays like this one: This UFC fighter is about flat broke, but MMA bossman Dana White tells you that things are copasetic in his realm, and that everyone is treated fairly and well by management.

The above Tweet came from Jessica-Rose Clark, a 32 year old Australian MMAer, who on Sept. 19 beat Sarah Alpar on a Las Vegas UFC card.

You may not find that sad, you might believe that this is a dog eat dog world, and no one is forcing Clark to fight. You might echo White’s arguments. But it’s my opinion that “our” business structure is imperfect, but morally, I’d rather defend ours, than side with White.

Bottom line, a massive reason boxing does the PPV thing is because we are a red light district of sports. We are not universally embraced, so we don’t get the massive corporate backing and funding that more embraceable sports do. The $75 you might spend tonight to watch boxing is a choice made possible by the fact that you follow a sport that many folks see as disreputable. But with the generous purses being paid to people who put their lives on the line to entertain you, to the quality (on paper) of the clashes, what Showtime is making available is neither disreputable, nor ridiculous.

–Reach out to Michael Woods via his LinkedIn profile, if you like.

The post Debating whether this PPV cost is “ridiculous” and who’s “greedy” appeared first on The Ring.