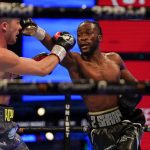 Denzel Bentley won the British middleweight title on Friday when Mark Heffron’s left eye was jammed shut from some horrific swelling, bringing the fight to a technical knockout ending after the fourth round at BT Sport Studio in Stratford, England.

Heffron’s eye had been closed by a Bentley right hand in the second round, two months after they fought to a stalemate in a rare unanimous draw.

There was little between them in the first round but Bentley scored with a right hand in round two that caused Heffron moments of discomfort and caused the left eye to swell badly.

Heffron switched southpaw, perhaps to protect that eye, but the bruising was ugly and his eye was closing rapidly.

Bentley, now 14-0-1 (12 knockouts), landed a number of long rights in the next, focusing on the wound. By the end of round four a grotesque purple swelling had slammed the eye shut altogether. It was all over.

“I knew I was hurting him with the right hand, I put him on the back foot,” said the winner. “All week I said I was going to stop him and that’s what I did. He’s a strong guy but he’s not as strong as the guys I’ve been sparring. He’s a soldier, he’s a tough guy, he didn’t want to come out of that fight.

“Get me another title. I don’t care what it is.”

Tommy flew out of the corner to start the contest and let both hands go early but he focused more on his jab as the pace settled down.

Krajevski was game and swallowed occasional heavy right hands and Fury started to look towards ‘The Baltic Bomber’s’ body in round two, firing in solid right uppercuts.

The loser was stopped for the fourth time and slips to 0-12. He was given oxygen in his corner as he slowly recovered.

“I just needed to ease into it, I’d been out a year but when I found my way I put the shots together and felt comfortable,” said Fury.