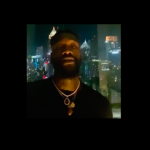 Deontay Wilder filmed a Halloween special, and in the video which came out on Saturday afternoon, the Bronze Bomber took double-barreled aim at Tyson Fury.

The heavyweight ex WBC champ Wilder in the two minute hit is saying that Fury is dodging him, and in the talk, which is making the rounds on social media, he also offers up excuses for why he got whacked around when he re-matched Fury Feb. 22.

The glove or gloves used by Fury were loaded, Wilder communicates, while snippets of supposedly tainted gloves are shown.

Bob Arum promotes Fury in America, and he told RING that while he doesn’t blame Wilder for lobbying for that third fight against Fury, to seek to off-shore blame for the loss as he does in this video is not cool.

“We haven’t heard anything from Wilder, then apparently he’s been watching TV, and he’s now mimicking Trump,” Arum told RING as he waited for his Saturday night Top Rank card in Las Vegas to kick off.

“I highly believe you put something hard in your glove, the size and shape of an egg weight,” Wilder tells watchers.  He says the hard object left a “dent in my face,” and we see a cut to the contour of Wilders’ skull. Wilder isn’t saying that the better man won on Feb. 22, and is casting blame here and there and not seemingly factoring in the man in the mirror.

Arum said that the procedures that the Nevada commission holds to with gloves for such a mega-fight are beyond strict. Pairs are present at the weigh in, both camps look at them, choose pairs, the mitts are marked by the commission, and then held in a safe place. The lead pair gets brought out fight night and put on the fighters, who have had their hands wrapped, in the presence of the glove handler, and an additional commission employee.

“It’s impossible for anything to happen to the gloves, this is busllhit,” Arum said. “And for Wilder to castigate the ref Kenny Bayless, who saved his life, and trainer Mark Breland, who also saved his life, is absolutely disgraceful.”

“In the end, it took a crab in the bucket referee and a disloyal trainer to throw the towel in just to stop me,” Wilder said, in a room fit for a seance, as we saw video of the decent soul that is Mark Breland explaining to Wilder that he didn’t want him to die right in front of him.

NOTE: I touched heavily on the way Breland has been treated by Team Wilder on Oct. 29. Read that story here.

To portray Fury as being a ducker or dodger is also way off key, Arum said. Wilder is trying to take it to Fury, color him a coward. Promoter Arum says that is pure nonsense.

As Arum sees it, the contract for a third fight said that clash should occur no later than the first week of October. The Wilder side asked if the can could be kicked down the road, to December, and the Fury folks agreed. Then, when Dec. 19 was set on, Fox and ESPN said that this night was too busy with college football and NFL action. Team Wilder asked for a shift to the end of February…and Fury said thanks, but no thanks. He wanted to glove up before then, and also, he understood that a larger fight than one against the dude he’d already won almost every round against is in play. “So Fury said no, I want to fight in the UK in December,” Arum continued.

There are moving parts in motion, of course. Anthony Joshua is to fight a mandatory aganst Kubrat Pulev, co-promoted by Top Rank, and The Bobfather thinks Pulev could spring the upset. But if AJ prevails, a fight or two against Fury, in the UK, stands to be seen as the biggest ever bout that region has ever seen.

“Tyson would maybe make three times as much for a Joshua fight,” Arum said, as he would for a third Wilder fight, so can you blame Fury for adhering to the terms of the third Wilder fight contract, taking the allowed for wiggle room, and setting his sites on bigger game?

“OK, if it’s a couple million, whatever…but it’s tens of millions of dollars! Hey, I can understand advocating for a fight with Fury, but to impugn the integrity of Bayless and Brleand, that’s abhorrent,” Arum said in closing. “And about the gloves, it’s nuts, if you know what the Nevada commission regulations are.”

You can reach Michael Woods on LinkedIn, if you like.