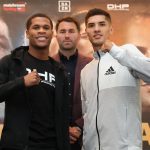 Devin Haney has come a long way in his pursuit of becoming a world titleholder. Literally.

It was just two years since ago that Devin Haney was fighting in dimly-lit dance halls in Tijuana, Mexico in front of unfamiliar faces and not signed to a major promoter.

Haney now has a major promoter – though he remains his own co-promoter – has a sizable fan-base and could be one win away from fighting for a world title belt.

The unbeaten lightweight contender has to get by Antonio Moran Saturday night at the MGM National Harbor in Oxon Hill, Maryland. The 10-round bout will stream live on DAZN (9 p.m. ET/ 6 p.m. PT).

All four major sanctioning bodies have Haney ranked in the top-10. Both the WBC and WBA rank Haney at No. 4, while The Ring has Haney at No. 6 in their latest rankings. Moran (24-3, 17 KOs) will be a significant test for Haney. The 26-year-old from Mexico City has appeared on a handful of ‘Boxeo Telemundo’ telecasts, and almost pulled off an upset on June 9, losing a close unanimous decision to former world lightweight titleholder Jose Pedraza. In his last bout on Dec. 7, Moran stopped Victor Zuniga in the second round.

“I know he’s tall and he throws a lot of punches,” Haney told The Ring Thursday afternoon. “I’m sure he’s going to put the pressure on me, but I have confidence in my ability. We’ve studied him and are aware of what he brings to the fight. I know he’s going to bring the best out of me.”

Moran will have a four-inch height advantage over Haney on Saturday.

The 20-year-old Haney has impressed thus far, and aside from his dominant performances, Haney has assembled a solid team to assist him, both in and out of the ring. Haney registered and received a promoter’s license in California, making him the youngest active promoter. His fight against Burgos was held in Temecula, California.

Haney recently signed a co-promotional deal with Eddie Hearn, who has a deal to broadcast fight cards on DAZN, including Saturday’s card in Oxon Hill.

“Eddie Hearn has a been a big help to me,” said Haney. “It’s been great having someone like Eddie on my team. He’s made things easier for me and I appreciate what someone like him has done for my career thus far.”

Haney has impressed in recent fights, which have aired recently on Showtime’s ’ShoBox’ series, and has become well-known to boxing fans.

“I started out as a pure boxer. That’s what fans had heard about me early on in my career. I’ve demonstrated I can box and punch in my last couple of fights. I can walk a guy down or box. I’ve also showed I’ve improved my skill-set to become a better, overall fighter.”

A victory over Moran could lead Haney to a world title opportunity later this year. Haney’s goal is to unify the division, but hope to become the next great American fighter.

As his marketability could become greater with every solid performance in the ring, there could fights in 2020 or 2012 with other top lightweights or junior welterweights, including Ryan Garcia and Teofimo Lopez.

“I’ve matured a lot and my maturity has made me focus more on the sport. I’m very motivated and I believe I will be fighting for a world title belt sooner than later.”

The post Devin Haney: ‘I will be fighting for a world title belt sooner than later’ appeared first on The Ring.