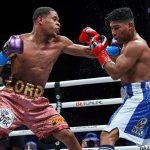 Devin Haney was just nine years old when he met Yuriorkis Gamboa, the 2004 Olympic gold medalist who had just recently defected from his native Cuba. Gamboa towered over the grade school boxing prodigy, but by the time they met in the ring on Saturday, it was Haney who stood tallest.

Haney (25-0, 15 knockouts) pitched a near perfect game, winning a unanimous decision at the Seminole Hard Rock Hotel and Casino in Hollywood, Florida. The scores were 120-107 on two cards and 118-109 on the third, as Haney retained the WBC lightweight title for the second time.

Though Haney, 21, said he wanted to drop the-often floored Gamboa four times, he was unable to do it even once, raising questions about how much punching power the Las Vegas-based Haney possessed. Gamboa had been dropped and stopped in his three prior losses against Terence Crawford, Robinson Castellanos and Gervonta Davis.

What no one was able to question was how masterfully he utilized his craft against the experienced, if ring worn 38-year-old Gamboa.

“I knew coming in that he was gonna do a lot of holding. I hit him with big shots, and whenever he was hurt he would hold and he would get scrappy,” said Haney, who underwent shoulder surgery after his last fight, a unanimous decision win over Alfredo Santiago last November. “But that was just him being a veteran and knowing how to survive and being in a lot of big fights.”

Devin Haney was in the zone tonight

From the outset, Haney used his left jab to the head and body to get his punches off first, keeping the former featherweight and junior lightweight titleholder Gamboa (30-4, 18 KOs) on the defensive.

Haney began to put more of a beating on Gamboa in round 4, evading a body shot from Gamboa and landed a wide right hand clean on Gamboa’s face. Gamboa showed his frustration by punching Haney on the break, earning a warning from the referee.

The jabs and body punching Haney did early in the fight set up his lead left hooks and right hands in the seventh round, though Gamboa’s legs never wobbled and the naturally smaller man was never in danger of being stopped.

The fight continued on a similar pattern, with Haney controlling the action with his speed and craft, but Gamboa showing the durability to stand up to what was coming his way. Haney connected on 133 of 401 punches thrown for a 33% connect rate, according to punch stats on DAZN, which broadcast the fight live, while Gamboa landed 84 of 472 for an 18% connect rate.

“Teofimo Lopez is the one with the rest of the belts, so that’s the main one I want to make happen.”